Something in the air at Ground Effects 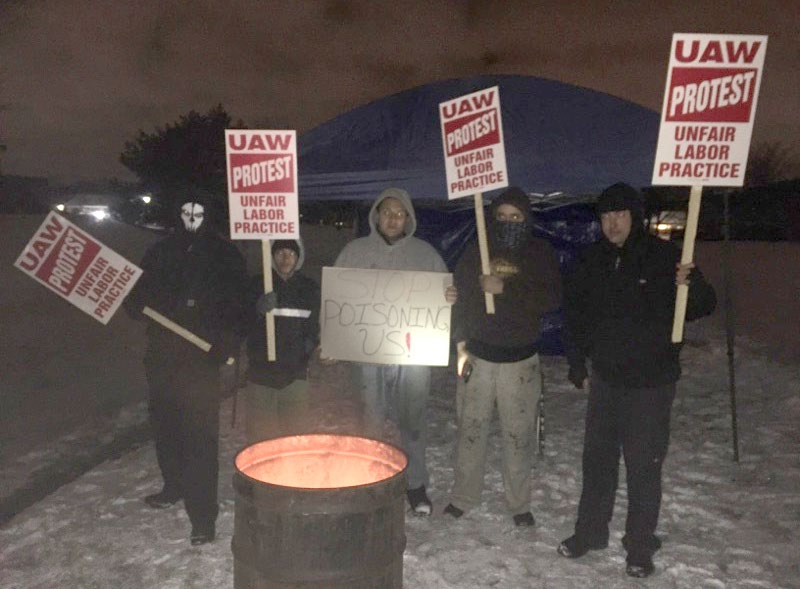 When Jason Coffey is working at automotive supplier Ground Effects in Dearborn, Michigan, he feels like he is under water.

“I feel better when I’m away from the facility than when I’m there,” he said. “It feels like I am breathing in heavy air.”

“What I found out for me and my coworkers is that many of us have headaches a lot more often,” said Maria Sanchez, a former employee at Ground Effects who believes she was fired for supporting a union. There have also been complaints about skin deterioration, fatigue, hair loss and more.

The company didn’t listen, so workers have taken matters into their own hands. In late February they filed 10 Occupational Safety and Health Administration (OSHA) complaints for major health and safety violations that include lack of adequate ventilation, repeated skin contact with the toxic uncured isocyanates, respiratory problems from robotic spray booths, lack of adequate hand and foot protections, and problems with the alarm systems.

On March 3, they took their complaints public with a 3 a.m. protest at the company and a news conference later that morning.

“Would you like your daughter to work in a place like that? I don’t think anyone should work in those conditions,” said John Salazar, another former Ground Effects worker who believes he was fired for supporting the union organizing effort. There have been at least 18 unfair labor practices filed against Ground Effects and the company has been fined

$6,500 for health and safety violations. In addition to Sanchez and Salazar, two more Ground Effects workers, Maria Chavez and Miquell Bragg, have been fired for speaking out on workplace conditions. The discharged workers have since filed Department of Labor whistleblower charges against Ground Effects.

There are nearly 100 workers at the Ground Effects, where the work includes spraying the bed liners of Ford F-150 pickups produced at the Dearborn Ford Rouge Complex.

In addition to the health and safety violations, workers have had other problems at Ground Effects. In July 2015, during an organizing campaign, workers had more than 80 percent union support on authorization cards. They were on the way to forming their own union. The company brought in union busters and workers lost the election by one vote.

However, in December, the National Labor Relations Board approved an agreement to hold a second election because of tactics the company used during

the vote. Since then, Ground Effects has committed other labor practices that are unfair such as firing workers like Sanchez and Salazar who want to form their own union.

“Our goal is just to get the point across to management that we need a union in here,” Sanchez said.

“I just want to provide for my family,” said Juan Gutierrez. “I want that for us and for others who are going to work here.”