Solidarity is Giving and Getting Support

Students say the outsourcing issue cuts to the heart of what the institution’s values are.

Events Show How We Can All Help Each Other

The Merriam-Webster dictionary definition of solidarity is “unity (as of a group or class) that produces or is based on community of interests, objectives, and standards.” With the UAW, that is always the case, but three recent situations involving UAW members clearly show what the word is in action.

Having allies is important — Teamsters Local 337 in Monroe, Michigan, knows that well. About 120 Teamsters work at Sysco’s Sygma distribution facility in Monroe and went on strike March 4 to win a first contract.

Right by their sides were UAW members, including many from UAW Local 723, an 11-unit amalgamated local that represents workers at Chrysler’s Dundee Engine plant, Gerdau Steel, driveline manufacturer Neapco, plastic injection manufacturer Yah Feng, and others in Monroe County. They didn’t need to be asked to help, said Local 723 President Jeff Morris.

“They all jumped right in,” Morris said. “I’m so proud of our members.”

The Teamsters local is based in Detroit, about 30 miles north of Monroe, so the UAW local provided a great deal of logistical support, by providing the use of their building, portable shelters, and access to the local’s food pantry.

“We had our members down there walking the line with them,” Morris said. “Every day we ran some sort of fresh food up there.”

The Teamsters won a four-year contract that included raises, significantly lower health care costs and other improvements. Todd Lince, president of Teamsters Local 337, expressed his local’s appreciation to those who stood in solidarity with his local.

“These workers organized in January 2019, so they are relatively new to the union, yet they stood strong throughout the strike despite the company taking away their health insurance,” Line said. “I want to thank other unions who helped us during the strike, including the UAW, the firefighters’ union and AFL-CIO.” 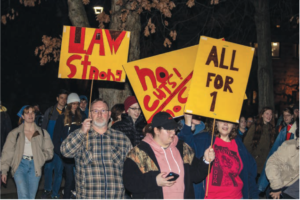 That solidarity came from the opposite direction during the General Motors strike in late 2019. Teamsters General President James P. Hoffa joined UAW members on the picket line at the General Motors Lake Orion Assembly Plant in Lake Orion, Michigan, in September. Teamsters also refused to deliver any GM products to distribution points and dealerships during the strike.

“Teamsters and the UAW have a decades-long relationship of having each other’s back,” Hoffa said in announcing his union’s support.

“It was great to see the community come together, not just the UAW,” Morris said. The same communal spirit was demonstrated by students, faculty and community members at Oberlin College, a small liberal arts and music conservatory school 35 miles southwest of Cleveland. They took up the cause of 108 UAW members faced with losing their livelihoods through the college administration’s desire to outsource their work cleaning and preparing food for the 3,000 students at the institution. They denounced the move at a March meeting of the school’s board of trustees.

“The overall message that students hoped to impress upon the board of trustees was that this issue of outsourcing isn’t and can never be just about the numbers,” Elsa Schlensker, chair of the Oberlin Student Labor Action Coalition told the Oberlin student newspaper, The Oberlin Review. “This is an issue about what our institution values and what we’re going to commit to as we approach our 200th anniversary,” Schlensker said.

More than 1,000 people signed a petition urging the board to rescind the move.

The COVID-19 situation caused the school to cancel the remainder of classes for the semester. The outsourcing issue remains unresolved. But the workers know they have allies and any moves by the administration will not go unnoticed — or unchallenged.