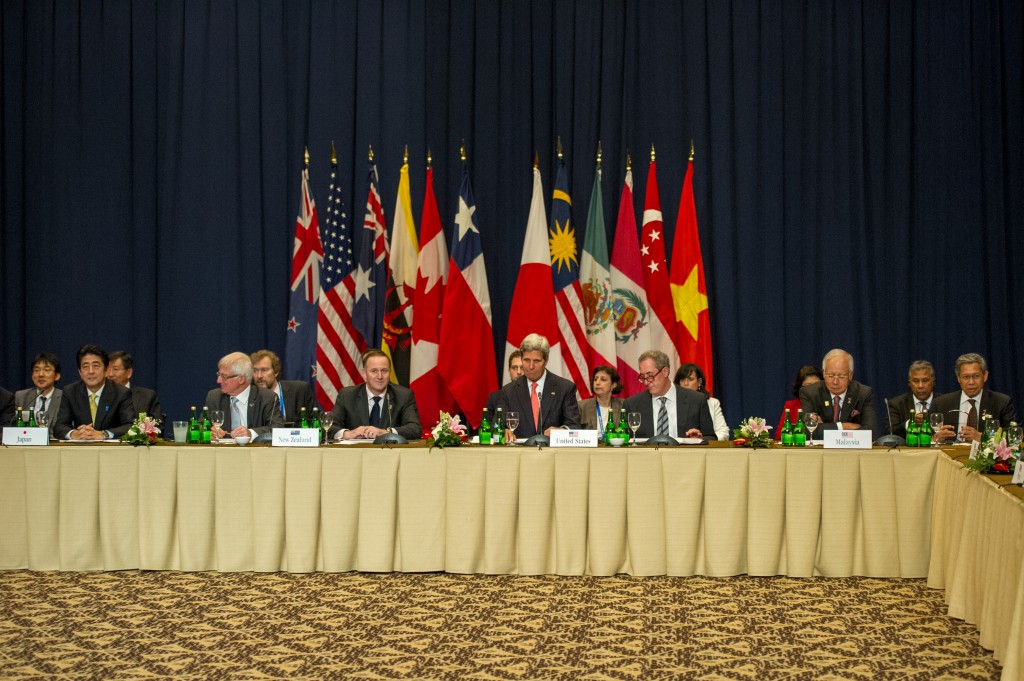 Last summer, Congress narrowly approved legislation granting Trade Promotion Authority (also known as Fast Track) to the president for the next six years — possibly, long enough to apply to three administrations. The passage of Fast Track means that Congress will only get an up-or-down, simple majority vote on all trade agreements with no opportunity to amend or filibuster. The UAW’s leadership and members throughout the country worked hard to oppose this misguided and undemocratic legislation. Unfortunately, we fell short of the 218 votes that were needed to stop Fast Track.

Just a few months later, in early October, the Obama administration reached an agreement on the Trans- Pacific Partnership (TPP) with 11 other countries, including Japan and Mexico. The mammoth text was made publicly available in November.

Over the last several years, the UAW’s leaders and members advocated for an agreement that creates prosperity for working families both here and abroad. Unfortunately, the TPP is not the agreement we were hoping for. In early December, after analyzing and discussing the text, the UAW’s International Executive Board concluded that the TPP, regrettably, repeats many of the mistakes of prior trade agreements that contributed to stagnant wages, rising income inequality, and plant closings in the United States. The board voted unanimously to oppose the TPP. It could come up for a vote in Congress as early as this spring.

The TPP puts the interests of corporations and their pursuit of overseas profits in the driver’s seat. We all know what happens when overseas profits are put before working families. We had a trade surplus with Mexico in 1993, the year before North American Free Trade Agreement (NAFTA) was implemented. Supporters of the trade agreement promised new jobs. Instead, U.S. trade deficits with Mexico cost almost 700,000 U.S. jobs by 2010. Most of the jobs lost were in manufacturing.

The TPP creates more incentives for companies to move operations to low-wage countries.

To add insult to injury, manufacturing workers in Mexico are often put in harm’s way for exercising their most basic rights. Most make less than $4 an hour (without benefits) despite booming profits and record growth for the auto industry. Company unions more aligned with employers than workers dominate and exclude independent unions. Sadly, the TPP does not create a concrete, enforceable plan to ensure basic rights for Mexican workers.

Nearly every auto manufacturer and supplier has increased their operations in Mexico with the hopes of increasing their exports to the United States and elsewhere. Take, for example, the manufacturing company American Axle. It had five U.S. plants and none in Mexico in the early ’90s. Now, there is only one plant left in Three Rivers, Michigan, and there are three times as many workers in Mexico as compared to the U.S.

Foreign direct investment has tripled in Mexico since NAFTA. Regrettably, the TPP includes many of the same investor protections. Several countries that have long track records of abusing worker rights are in the TPP. The TPP is bad for U.S. manufacturing, as The Wall Street Journal projects the combined U.S. trade deficit in manufacturing, including autos and auto parts, will increase by $55.8 billion under the TPP over the next 10 years. UAW members know what the offshoring of jobs does to communities.

The TPP creates more incentives for companies to move operations to low-wage countries. For instance, the auto Rules of Origin (ROO) Standard is weak, as over half of the value of a car or truck could be built by countries like China that are not in the agreement. This means Chinese companies could benefit without even joining. By comparison, NAFTA’s standard is 62.5 percent. This is another reason why the TPP is worse than NAFTA.

It will not create a level playing field for U.S. workers to compete as vehicles built overseas are routinely well over $5,000 cheaper because of undervalued currencies. Unfortunately, enforceable provisions to stop currency manipulation are not in the agreement. 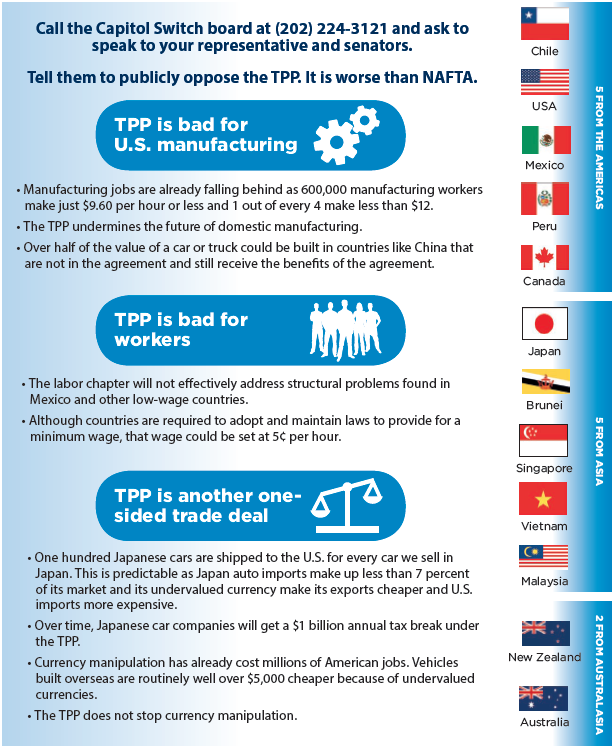