Report to members on the union’s finances 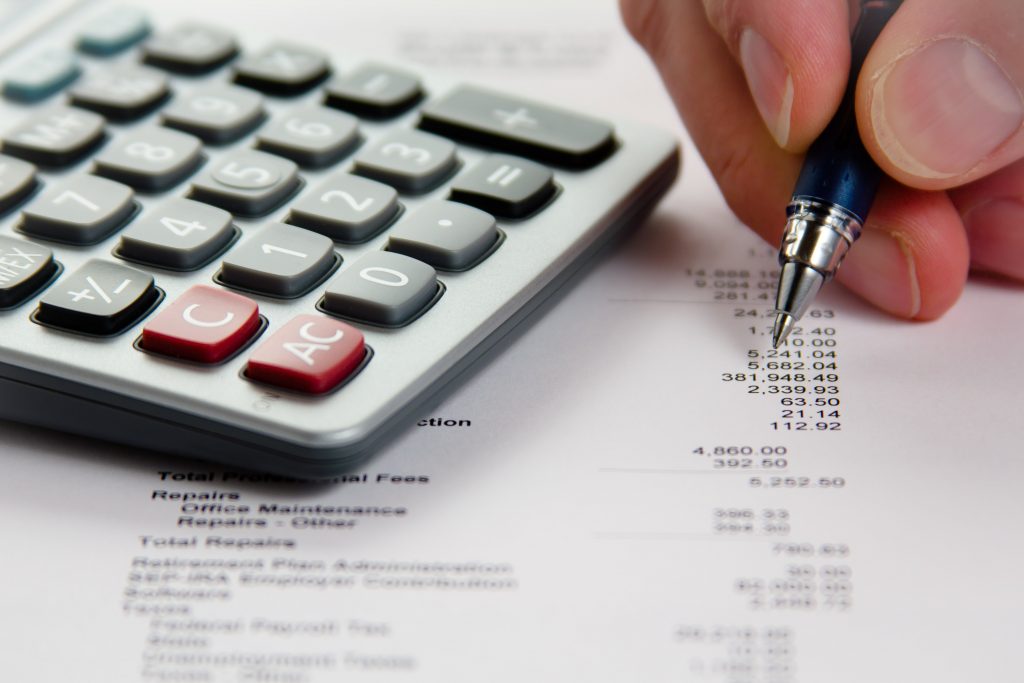 As many of you are no doubt aware, the maintenance unit at Volkswagen in Chattanooga, Tennessee, overwhelmingly voted in a federally supervised election in December to have the UAW as its legally recognized collective bargaining representative.

These efforts at providing representation to workers who ask for it are critical to our union’s goal of building density within the auto sector. It’s a virtuous circle: The more

density we have, the stronger position we are in to negotiate contracts that provide good wages and stable benefits for our members. Additional members translate into more resources for organizing campaigns. Successful organizing campaigns bring in more members, which build density within the auto sector and add bargaining strength. We’re proud of our new brothers and sisters at Local 42 at Volkswagen and are prepared to do all we can to assist them as they negotiate a first contract.

Having more members also helps stabilize the union’s finances, which are detailed in the pages that follow. The successful conclusion of recent negotiations at Ford Motor Co., General Motors, FCA USA, John Deere, in the auto parts industry, in gaming, higher education, defense and elsewhere, positions our union for increased growth in all of the industries and workplaces where we represent workers.

A potential obstacle — and opportunity — is the 2016 election season. Our participation in politics isn’t ideologically driven: It’s simply the key to our survival and growth. We saw how critical political participation was in 2008 and 2009 when the domestic auto industry was on its heels. Without our support for President Obama, it’s possible the entire industry, including the supply chain, would have collapsed.

Nor would we have appointees to the National Labor Relations Board (NLRB) who understand the difficulties involved when workers try to have a voice on the job.

Conversely, when voters sit on the sidelines as they did in the 2014, anti-worker lawmakers are elected, and progress for workers stalls — or begins to roll back. This coming election will determine which president will select Supreme Court justices and appointments to boards such as the NRLB and OSHA. Elections at the state and local levels also impact the bargaining strength we have.

We cannot afford to be complacent.

This financial report provides information about the union’s financial position. Among the highlights:

The following is a summary from UAW Secretary-Treasurer Gary Casteel. The full report is available for examination at all local unions.

The International Union’s financial structure is based on a system of individual funds. The UAW Constitution establishes this system and sets forth the source of income and objectives of each fund. The Secretary-Treasurer’s office ensures compliance with the Constitution by segregating all of the Union’s financial resources into separate funds and otherwise ensuring that expenditures are made in accordance with the Constitution. The Union has a total of 11 separate funds. The combined resources of these 11 funds are set forth in the figures below.

A summary of several of the Union’s larger funds is also included in this report. 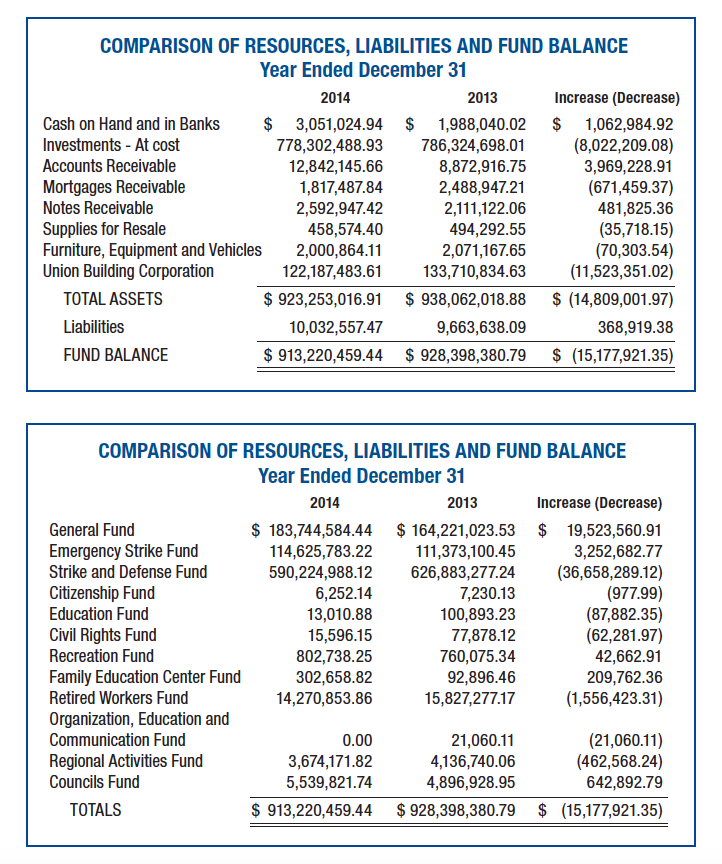 The remaining balance of the General Fund, $138,694,500.19 represents the cost of assets that cannot be readily converted to cash such as real and personal property, inventory and mortgages due from local unions.

The Union Building Corporation is the holding corporation for all properties owned by the International Union, UAW. During 2014, $1,221,839.85 was spent on the acquisition, development and capital improvement of UAW-owned properties. In addition, property valued at $30,000.00 was transferred to UBC from closed local unions. UBC disposed of property with a book value of $12,639,162.64 during 2014.

Public sector members generally do not have the right to strike. The allocation of the first two hours (or .832%) will be allocated 45.7 to the International Union, UAW General Fund and 53.3% to the Local Union.

The remaining one half (.05) hour of dues income (or .263%) shall be allocated entirely to the International Union UAW Strike and Defense Fund.

A portion of each member’s monthly dues allocated to the General Fund is distributed among several other activities/funds on a monthly basis. Each amount is expended only for the designated programs or activities. The allocation is as follows:

In addition, both the Local Unions and the General Fund are eligible for an additional rebate from the Strike and Defense Fund referred to as the “13th check”. 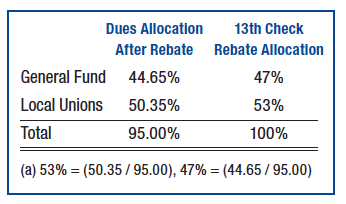 Expenditures of the Strike and Defense Fund for 2014 amounted to $17,842,804.69. A breakdown of these expenditures by Region is contained in this report. During 2014, strike assistance was provided to 404 members of our Union.

Below is a comparison of the Strike and Defense Fund Net Resources as of December 31, 2014 and the preceding year-end.

By action of the delegates to the 1980 Constitutional Convention, the Constitution was amended to establish the Organization, Education and Communication (OEC) Fund.  In accordance with Article 16, Section 14, the OEC Fund’s primary source of income is from earnings on investments. Under the Constitution, the OEC may receive up to 75 percent of the interest and dividends received by the International Strike Assistance Fund to be expended, as authorized by the International Executive Board, for specific organization, education and communication programs.

By actions of the 33rd Constitutional Convention in June 2002, the Emergency Operations Fund was established. The assets of the Emergency Operations Fund, including accrued interest and earnings on investments, shall be available to finance operations of the International Union in the event Operating Fund resources are insufficient to sustain operations due to the effects of a protracted or expensive strike, a series of strikes, or other events posing a serious threat to the economic viability of the International Union

Effective January 1, 2003, the UAW established Union Building Education, Inc. (UBE), a 100 percent-owned subsidiary corporation of the International Union, UAW, for the purpose of operating the Family Education Center in Black Lake. UBE collects income and pays expenses associated with the programs at Black Lake. The International Executive Board is authorized to transfer money from the OEC Fund, as necessary, to help supplement the cost of education activities at the Family Education Center.

In summary, the UAW’s financial condition remains strong. We continue to make difficult financial decisions in response to the challenges presented during these extremely difficult times for our members and the organization. I wish to thank my fellow Officers, Board Members, Staff Members and Office Employees for their cooperation and commitment to the financial stewardship of this great union.