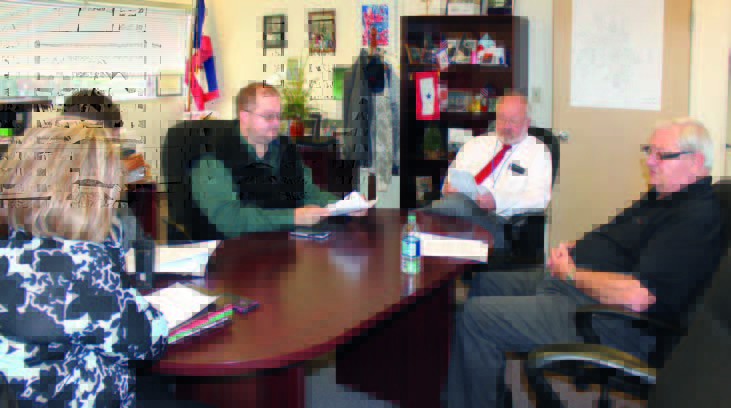 Program in Ohio shows that CAP is much more than politics

Many UAW members, when they see the letters C-A-P, automatically associate them with the UAW’s efforts to elect working family-friendly candidates through the

union’s Community Action Program. But CAP is much more than a political lobbying tool: It’s how we stay connected in our communities — not only with elected officials, but other individuals and groups to work for positive change not only for our members, but also for the community at large. After all, the first letter in CAP stands for community. For instance, in Lima, Ohio, the Lima/Troy UAW CAP Council started a project that evolved into a community wide program of unions, community groups, social service groups, faith groups, and the mayor’s office to collaborate to identify issues and solve problems.

The effort, which advocacy group Progress Ohio played a key role in facilitating, continues to make a difference in the community. There has been more emphasis on programs that keep neighborhood kids busy and off the streets, initiatives that have brought more fresh produce to keep children healthy and more open dialogue between union members and community residents who understand that their common interest is making their communities stronger and better.

John Paradore, president of the Lima/Troy Area UAW CAP, understood the potential and wanted to broaden CAP community service after seeing time and again how unions showed up to rallies alone and did everything alone. Events sponsored by labor unions were seen as a “union thing” and unions were seen as having a narrow focus regarding community involvement. A UAW local would sponsor a hunger drive or members would attend a rally regarding work issues but for CAP purposes, those campaigns weren’t as inclusive as Paradore thought they could be. “Unions are too exclusive and if we are going to stay strong, we have to be involved with other community groups and show them labor has the same goals in mind,” Paradore said.

Everyone was rowing in the same direction, but it’s easier if everyone rows together – John Paradore, President of the Lima-Troy Area UAW-CAP

First off, with his many years of labor union activism, he noticed that nonprofit social service and faith groups were noticeably absent from many of the labor union events. Better jobs, health care, and living wages weren’t only UAW issues but issues of all working people and everyone in the community is affected if people are unemployed. He thought it would be advantageous for the UAW Lima/ Troy CAP to extend itself to broader social causes beyond events labelled “labor union issues.”

By joining forces with groups that had never thought of the UAW as a partner, he envisioned future labor rallies to include not only union members but child advocacy and faith groups because the goals of all were related: community improvement. This, he believed, would build power for not only the UAW through community service but all the groups who could pool resources and get more done. “Everyone was rowing in the same direction, but it’s easier if everyone rows together,” Paradore said.

Paradore’s challenge was to make the community groups see what he saw. So he picked up the phone and called local groups and churches and asked them if they would want to form a committee to work on social justice issues.

The response was positive, almost as though there was a collective, “Yeah, that’s so obvious, why didn’t we think of that before?” Now, more than two years later, the UAW Social Justice Committee has over 20 members and a growing list of accomplishments and goals.

Meeting monthly, the UAW Social Justice Committee board identifies problems and strategizes the best solutions. The group is nonpartisan and accepts members from all groups, even those who typically might not be found on a UAW social justice committee, such as people with notably more conservative political views. Paradore recognized that politics could be a challenge but  the goal of the committee is to help citizens in Lima so he laid down the law that any anti-union sentiment is left at the door when someone walks into a meeting. “There has never been a problem,” Paradore said. “Once they sit down and meet each other and start sharing information, any animosity held outside of the meeting is absent and we all get along and that helps.”

Interestingly, the committee has found allies in unlikely places and that has led to dialogue with politicians and groups that would not normally be involved with labor unions. U.S. Rep. Jim Jordan, chair of the right-wing House Freedom Caucus, supported a Social Justice Committee’s campaign for rebuilding a home for a mother who was raising an autistic child. Another benefit of the committee is raising awareness of all issues in the city. People are often so invested in their own cause, that they are unaware of other pressing issues. The Rev. David Ross of St. Rose Parish joined the committee because his main concern was rental housing in the downtown area and the lack of upkeep by landlords. By sitting on the board, Ross met Amy Sackman Odum, director of Lima’s Department of Community Development, and learned that there are different standards for housing throughout the city and together, along with the entire committee, they are working to develop a uniform standard of housing requirements for rental homes.

Jennie Horner, coordinator for the Allen County Family and Children First Council, sits on the committee board on behalf of child welfare. Through the committee, she has been able to make great strides helping area families. The committee mobilized and bought mattresses for kids sleeping on floors, helped fund a mobile produce bus to travel to areas of the city where residents (mostly children) have limited access to fresh fruits and vegetables, and participated in the remodeling of the home for the autistic child. Through Horner’s exposure to Lima Mayor David Berger, who also sits on the board, she was able to develop a good relationship with him and his staff. Through this relationship, she brought to the mayor’s attention the connection between lack of after-school activities and juvenile delinquency in the city. Because of this Horner is currently working with the mayor and local law enforcement to provide activities for kids so they won’t end up in the justice system. With Horner’s access to children and families in need, she is the voice of them and can speak directly for them. “People living in the community know what’s best for them and they know the issues that need to be tackled. It’s the human relationships that make people strong and everyone has a vested interest in the success of this community,” Horner said.

Paradore is proud of the momentum and the evolving partnerships.

“Our union is political but it’s getting the community to

understand the partnerships that are involved in making the place a good place to live and work that’s important,” Paradore said. “One way to do this is to develop relationships with people and get them to see that it’s not political to want children to live in safe homes and eat healthy food. It’s not a union thing either, it’s a community thing.”