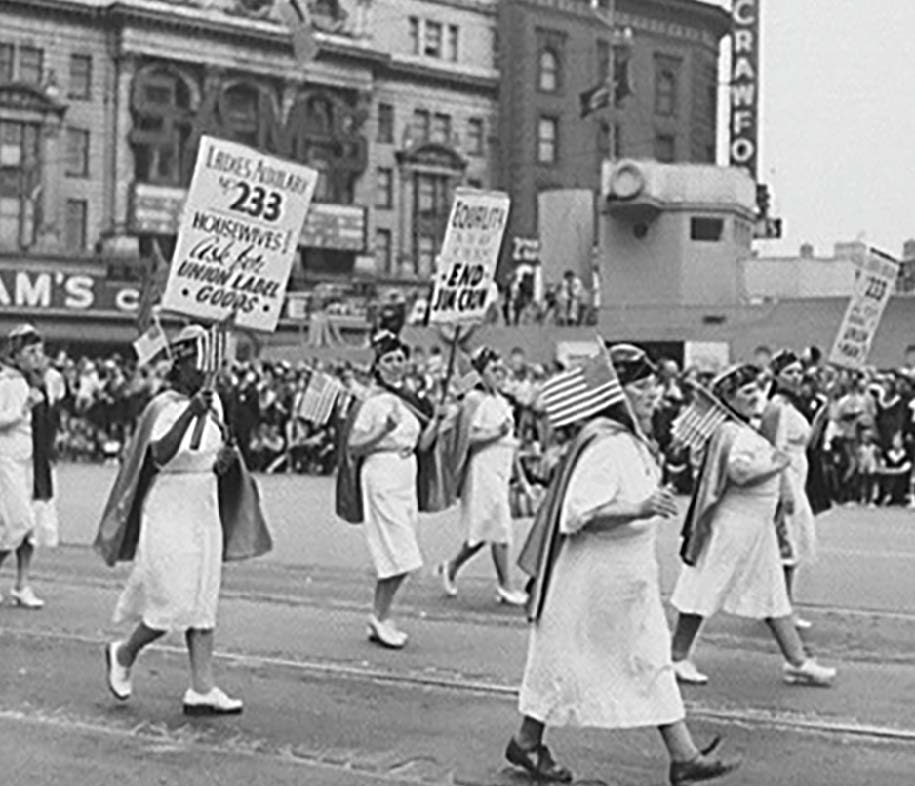 Above: Members of the Women’s Auxiliaries often had an ambitious agenda, such as securing free nurseries for mothers, maternity leave, equal pay and an end to discrimination.

DID YOU KNOW...
One of the best ways to share the values of our labor movement is to participate in the UAW Family Scholarship Program at our education center in Black Lake, Michigan. It’s a weeklong summer program for families open to all active or laid off UAW members in good standing who have never attended the program before. For more information about 2017’s program, see the story and application on the web, here or contact your local union. 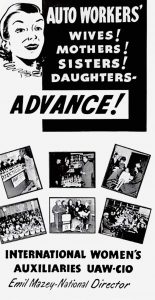 Women have always played critical roles in the labor movement — especially in the CIO-led unions of the 1930s. Obvious examples are stories of women working the line and demanding a voice at work. But the role of women goes far beyond Rosie the Riveter. It was also the wives, daughters, sisters, girlfriends and mothers of union members who often played pivotal roles in our fight for justice.

To understand the significance of this, you need to go back to the days before the CIO. “Women’s auxiliaries” consisted of female family members of mostly male union members who often performed social or charitable work on behalf of unions. Early on, the groups were polite, but showed the beginnings of activist engagement by encouraging women to use the power of the household purse to buy union-made goods and support union jobs.

By the 1930s, there was a growing divide in the U.S. labor movement. The AFL-led unions viewed their role as protecting their craft. They disfavored organizing unskilled workers, women, African- Americans and industrial actions (i.e., strikes). The CIO-led unions, on the other hand, rejected such a narrow view of labor. After the AFL and CIO split, the CIO embarked on a wave of ones. Women were now on the forefront fighting for justice along with their loved one at rallies and strikes. They were often the real “man power” of our union.

In 1941, they organized into the CIO Congress of Women’s Auxiliaries and held their first convention in Detroit. Faye Stephenson, wife of an autoworker, was the first president. She had been active in the labor movement since the age of 13. Catherine Gelles was the first vice president and she had been a union supporter since she was 12 “when she helped to stop the cars so older girls could throw rotten eggs at the scabs.”

DID YOU KNOW...
Women’s auxiliaries were also important in helping the next generation understand the importance of the trade union movement. These women led discussions around the dinner table with their children about the role of work and unions. The importance of making this connection with those who come after us was firmly held by the UAW going back to our creation. “We should keep in mind the fact that every move made to train and develop our youth through union channels will result in a greater degree of union loyalty and solidarity and give our youth a beginning in the principles of unionism so that they may join in when necessary to solidify the union front and defend their own interests.” United Automobile Worker, May 15, 1936

The women set to work with an ambitious agenda which included demands of Congress. They lobbied for free nurseries for working mothers, maternity leaves, equal pay and an end to job discrimination against African-Americans.

In this way, the CIO women’s auxiliaries were an innovation in the labor movement. At their peak in the 1950s, there were more women in labor auxiliaries than labor unions.