PRO Member: A Call to Action 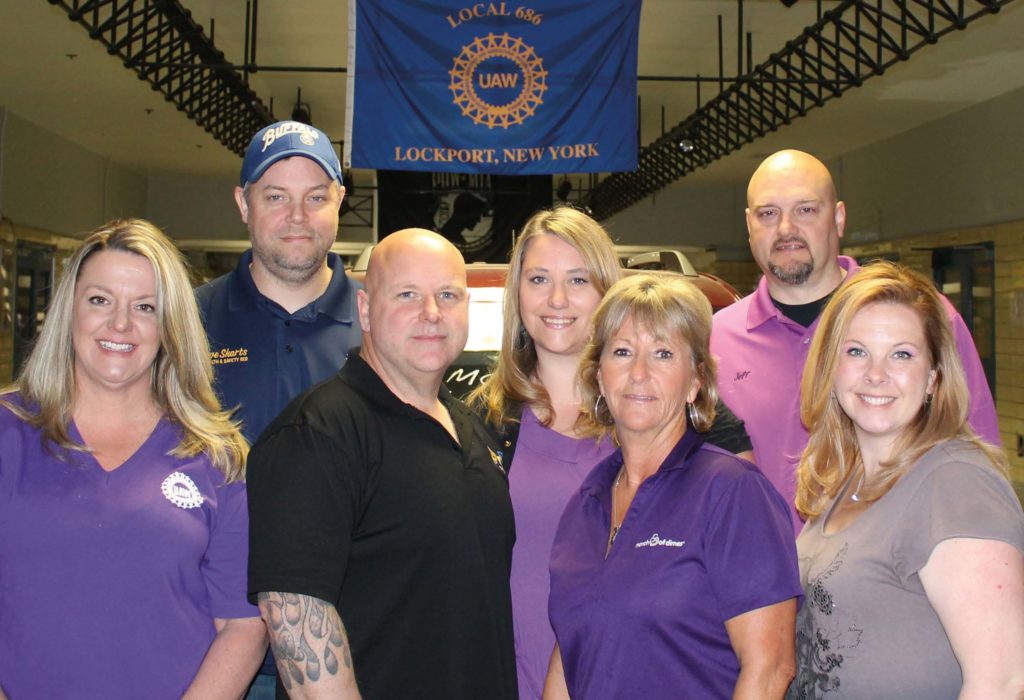 Jessie Jesson, fourth from the left, and her brothers and sisters at Local 686 remember the dark days of the auto crisis and wondered whether they would still have jobs. The crisis made Jesson aware of the need for union involvement and making connections with fellow members.

When the auto crisis struck and General Motors was heading toward bankruptcy in the latter part of the 2000s, it sent waves of uncertainty through all the plants. Jessie Jesson had been working at the GM Lockport, New York, plant as a member of Local 686 since 2000. Her grandmother had been a 30-year member of her same local who always told her to have faith in her union, but even Jesson wasn’t immune to the thoughts of “what if.”

Her plant makes HVAC, radiators, condensers and other parts for GM vehicles. The plant has been around since 1910, but has gone from GM to Delphi and today it is part of GM Components. But in 2007, it looked touch and go.

“That’s when we had our pay cut,” she remembered. “We didn’t know if our plant would survive. It was a wakeup call for a lot of us.”

Up until then, Jesson was content. “I made a good wage. I knew that being UAW had everything to do with it, but to be honest, I was kind of naïve about how our union worked.”

At one point when the fate of Lockport looked uncertain, Jesson and her co-workers were offered a chance to transfer to another GM facility in the area. “That was the toughest decision of my life because I loved our local, I loved our plant and I loved what we had. I remember sitting there talking with some others — maybe about nine of us. And we decided that if we were going to stay, then we were going to do everything we could to make our union strong.”

And Jesson and her friends made good on their pledge. Before long, they were joining standing committees and attending trainings and meetings. Through the process, Jesson learned almost as much about herself as her union. “I didn’t understand the power of talking to others, about helping them make connections between why we need to be active and the power we have at the table. But when I started doing it, I saw light bulbs going on for some and then they, too, would get active. I didn’t know I had that in me, but I now know we all have the ability to do this, to lead.”

“Our shop chairman, Mike Branch, is one of the main reasons why we’re still here and strong. Our plant now has over a thousand members and a thriving network of standing committees,” said Jesson. “I’m especially proud of what we’ve done with our Buy American committee. Mary Ward-Schiffert is our chair and our Buy American Day is an annual late summer event where we raise thousands. We also sponsor area high school robotics teams who now wear American-made jerseys in competition.”

Today Jesson is a busy UAW member. She works in communications and is the UAW representative for United Way and March for Babies. Her grandmother’s guidance to keep the faith and make her union strong still echoes in her mind. “I still remember her words, but I am especially lucky because her advice became meaningful after what I experienced. My hope is that I can pay it forward to the next generation of UAW activists.”