Battered by a Hurricane, But Still Helping Others 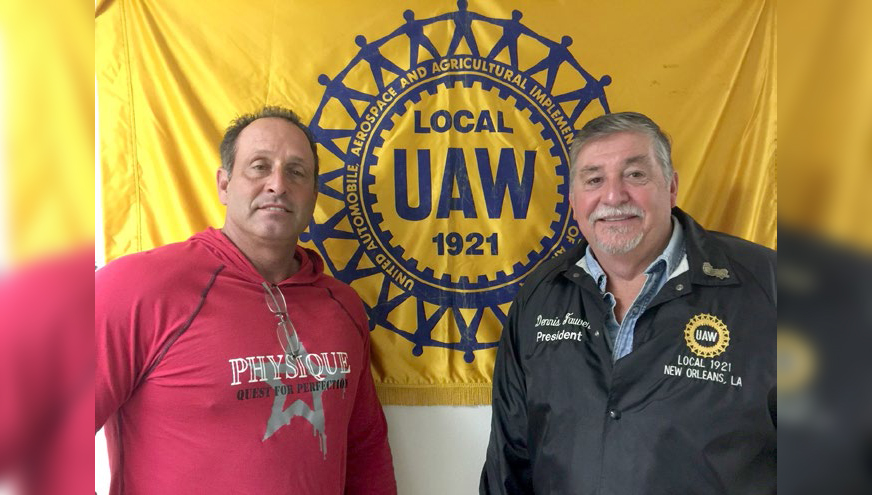 On Aug. 26, 2005, Dennis Fauver, president of UAW Local 1921 in New Orleans, was busy loading up his F-150 pickup truck with all manner of papers and files that he thought he had to save from the local union office. Gov. Kathleen Babineaux Blanco of Louisiana had just declared a state of emergency and Fauver knew that mandatory evacuation orders were next. “I’ve lived in Louisiana my whole life, but nothing had prepared me for what was about to happen, for what Katrina was about to do,” Fauver says.

Fauver had been working at Lockheed Martin’s Michoud Assembly Facility on the outskirts of New Orleans since 1983. They had been building the external tanks for NASA’s space shuttle program since 1975 at the 800-acre facility. The 800 UAW members included production and maintenance workers for the facility.

“I had just left the Navy and was looking for a good job not too far from my family. That it was union made it even better.” Fauver joined right away (Louisiana turned Right-to-Work in 1976) and started building his life. 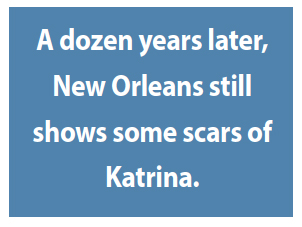 Fauver became interim president of the local in 2004 and had just been elected to a full term a few months before Katrina hit. As he loaded up his truck that Friday, he knew that the clock was ticking. Thirty UAW members were going to stay behind at the facility as part of a hurricane response team, but everyone else was advised to head out of New Orleans. “A few of our members rode out the storm, but most of us loaded up our cars and started driving. One of the eeriest things I remember was the contraflow of Interstate 59 where all lanes were heading north.”

Fauver and his family drove to Ruston, Louisiana. “When Katrina finally made landfall on Monday, I thought that it was going to be all right. But then word got out that levees were breaching,” Fauver remembers. “It wasn’t uncommon for levees to breach, but the news had one major levee after another failing.”

For the next two weeks, it was difficult to get any information from the ground. Fauver decided to head back to assess the damage.

Michoud had been mostly spared: They lost water and power, but avoided the flooding. In fact, it became one of the only dry green zones in the city for the next few months to come.

But the rest of New Orleans was a different story. The physical wreckage and devastation was shocking. “Debris and refuse piled 8, 10 feet high all up and down roads. It was overwhelming to see,” Fauver remembers.

Soon UAW members were in assessment and recovery mode. “We ran the local out of my house for the next three months. The biggest issue was that people didn’t have direct deposit back then and our members scattered across the country. But we worked through it with the company to make sure people had access to money.”

The facility wasn’t back up to production for three months. “It took about that long to get a lot of our folks home. Keep in mind that for many they lost everything so when they returned, it was to a washed- or flooded-out house.”

Stronger Together: The Thread That Ties Us Together

It’s not easy to define “union.” Some reference collective bargaining and the improvements to wages, benefits and working conditions we make through negotiations. And for some being organized is about fully appreciating the power of political action as, after all, everything we gain at the bargaining table can be wiped out at the ballot box. Others will describe the positive social change we are able to affect in our communities through our unions.

All of those descriptions are accurate. But there is also a thread that winds through all of them: the simple notion that we are stronger when we stand together and help one another. Gains at the bargaining table happen because the employer doesn’t question our resolve to stand together. We’ve seen what happens when officials who support worker rights get elected (and what happens when politicians who don’t ascend to office). And the very heart of social change comes from our mandate to stand in solidarity with those who are vulnerable and in need.

Despite the traumatizing storm that touched everyone, it didn’t dampen the spirits of UAW members when it came to helping others. “We all stepped up to help in whatever way we could, even if we ourselves had lost almost everything. We worked with United Way and UAW Community Services to get resources out where needed. It’s what we do. It’s who we are.”

A dozen years later, New Orleans still shows some scars of Katrina. Local 1921 is different now because the old Space Shuttle program shut down in 2010 and now Boeing has the contract to build the next generation of space travel vehicles called the Space Launch System. But the UAW members there remember. Just recently, a local business supported a fundraiser for victims of flooding due to Hurricane Harvey in Houston earlier this year.

“That’s a special city for us because they welcomed us during Katrina and we wanted to give back,” Fauver says.

UAW V-CAP: Investing in Our Future