From the President: NAFTA Must Work for Workers

In 1979, Ronald Reagan announced his candidacy for the Republican presidential nomination and in his speech he called for a “North American accord” which he said will produce “a North American continent in which the goods and people of the three countries will cross boundaries more freely.” It would take more than a decade for Reagan’s idea to come to fruition, but after Congress passed the Trade and Tariff Act of 1984 giving the president “fast-track” authority to negotiate free trade, Reagan could pursue his vision. Reagan passed the baton to President George H.W. Bush who continued negotiations with Mexico and Canada for a trade deal. That trade agreement that we know as the North American Free Trade Agreement (NAFTA) was agreed to by President Bush in 1992 and passed by Congress in 1993. UAW and many labor unions fought against the passage of NAFTA and pushed for better labor standards to be included in the trade deal. In both the House and the Senate, more Democrats voted against NAFTA than for it and despite vocal opposition from many Democratic members of Congress NAFTA was passed by the majority of Republicans and a handful of Democrats. It was unfortunately signed into law without enforceable labor protections by President Bill Clinton in 1993. 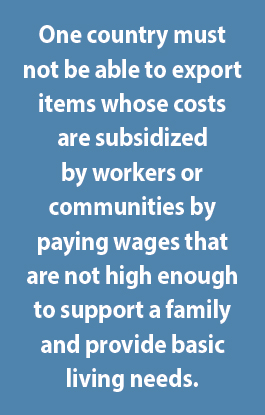 The supporters’ story back then was that NAFTA promoted trade between the U.S., Canada and Mexico and living standards in all three countries would rise. But this isn’t what NAFTA was about and it’s not what happened. The U.S., Mexico and Canada had trade relationships with each other long before NAFTA. What NAFTA did was let U.S. corporations evade American laws that protected workers and the environment. According to the Economic Policy  Institute, NAFTA resulted in the loss of approximately 700,000 jobs in the U.S. and wages and benefits have fallen behind worker productivity in all three countries ever since.

The UAW strongly supports renegotiating NAFTA because workers and domestic manufacturing have been hurt by the trade agreement. Over the last 20 years, corporations have taken the low-road approach to increasing profits by moving production to Mexico where workers are paid low wages and environmental protections are poorly enforced. This has led to a steady disinvestment in America’s workers, manufacturing capacity, and innovation. For NAFTA to be a good deal for working people it needs to create jobs in the United States and reverse our outrageous trade deficit. Because of this disinvestment, any effort to renegotiate NAFTA needs to be accompanied by a strong industrial policy focused on reinvestment, workforce development, support for advanced manufacturing and technologies, building a 21st century infrastructure, and creating penalties for companies that turn their backs on American workers.

Companies routinely used (and still use) the threat of moving to Mexico at the bargaining table to undercut labor unions’ collective bargaining power all the while Mexican workers make 30 percent of what American workers do. That’s wrong for all North American workers and we have to address workers’ rights when it comes to renegotiating NAFTA. For a new NAFTA to be a good trade agreement Mexico must, at a minimum, require independent and democratic unions, require workers to vote on contracts and union leadership, and require unions to represent its members. Furthermore, to help grow the Mexican middle class after decades of depressed wages, a new NAFTA should require Mexico to establish a Mexican manufacturing minimum wage.

A new NAFTA must include punitive duties for labor violations. We can’t allow labor violations to be settled using a weak dispute settlement system that fails to hold violators accountable. Taking into account the decades long suppression of labor rights in Mexico, labor violations should be subject to punitive duties, such as tariffs. Labor unions in all three countries should have standing to bring charges of labor abuses — regardless of whether the union represents the workers.

We support increased Rule of Origin requirements and eliminating loopholes in the existing standard. Countries that are not signatory to NAFTA are indirect beneficiaries to the agreement. It is important companies do not sidestep labor standards and environmental protections by producing their products in countries that do not meet these standards.

We have to end the exploitation of workers who are trying to provide for their families — food, shelter, clothing, education — should be attainable for workers. A new NAFTA should expand the anti-dumping provision to include wage and environmental standards. One country must not be able to export items whose costs are subsidized by workers or communities by paying wages that are not high enough to support a family and provide basic living needs.

Any good trade agreement will have health and safety regulations harmonized to the highest standard across all three countries. Workers should be competing on skills and efficiency instead of which company can cut the most corners.

The Investor-State Dispute Settlement (ISDS) provisions in NAFTA must be eliminated. ISDS gives corporations and investors the right to sue governments that pass laws that affect profits. An ISDS claim sidesteps the country’s legal system and allows an ISDS tribunal to decide the case based on the rules of NAFTA. This process lacks transparency and undermines the whole idea of democracy because corporations are given special powers that put them in the driver’s seat above laws and regulations passed by our lawmakers.

We have seen the problems caused by NAFTA and must not repeat it. A truly good trade agreement should provide the foundation for workers in all three countries to raise their living standards. NAFTA only provided the framework for companies to reap more profits at the expense of working people.