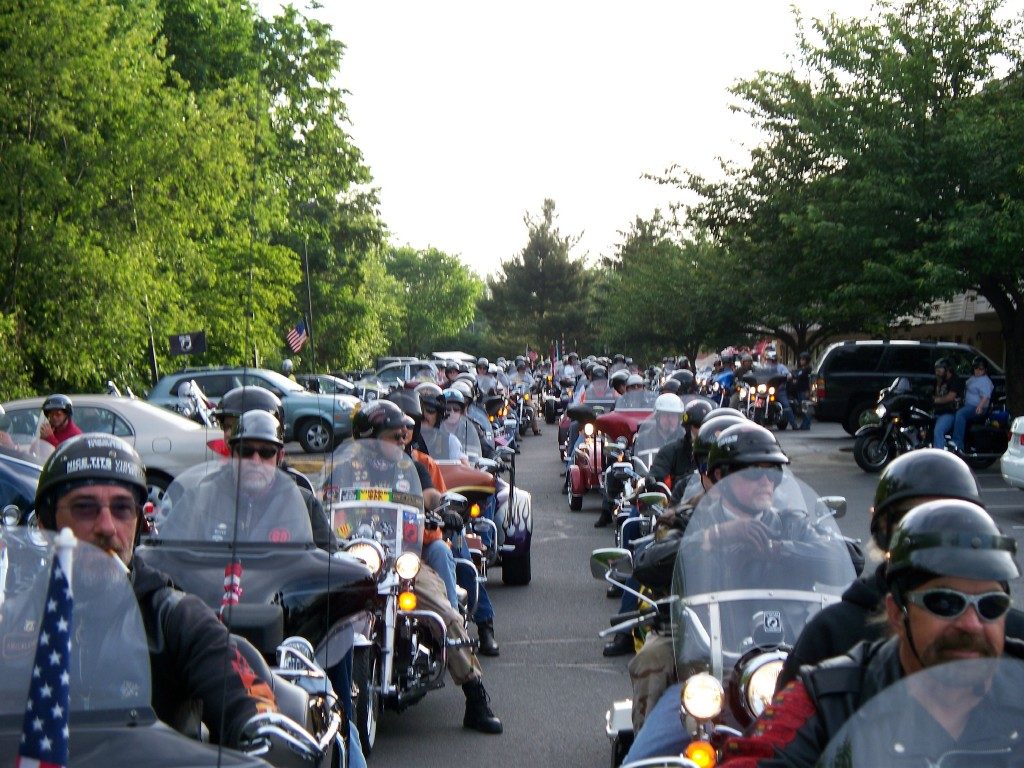 UAW members are set to participate in this weekend’s Rolling Thunder ride.

As UAW members, we know how important it is to treat Memorial Day and our nation’s fallen heroes with proper respect. Many of us will participate in ceremonies at national cemeteries, government buildings, parks and other places.

Local 2069 in Dublin, Virginia, is one of hundreds of UAW locals that will be out in force to make sure Memorial Day is properly commemorated.

Vice President Mark Peterson has participated in every one of the local’s “UAW Veterans Ride for Freedom to the Wall” since its inception 26 years ago. The motorcycle riders hook up with other UAW members and other riders from across the nation as part of the Rolling Thunder commemoration in Washington. At the local, which represents workers at the New River Valley Volvo Truck plant, there will be a 21-gun salute, cannon salutes, posting of colors and an address by Maj. Gen. Randal D. Fullhart, USAF (Ret.), the Commandant of Cadets of the Virginia Tech Corps of Cadets.

The ceremony is the biggest event in the New River Valley that weekend, but Peterson said it will be dignified and respectful because the weekend carries so much meaning.

“We will have a really nice and humble ceremony at our union hall,” he added.

The plant has produced a specially themed truck in each of the last four years to honor those who have died and all those who have served. This year’s truck has an image of Mike Christian, a naval aviator and POW for seven years during the Vietnam War. Christian collected bits of red, white and blue fabric while in captivity and used a needle made with bamboo to sew an American flag inside his prison shirt. Every afternoon before they had their meager soup, Christian would remove his shirt, display the flag and 20 other POWs would recite the Pledge of Allegiance. When his captors discovered this, Christian, from a small town near Selma, Alabama, was severely beaten and tossed back in his cell. U.S. Sen. John McCain, himself a former POW, recalled Christian’s actions in his memoir:

“As I said, we tried to clean up Mike as well as we could. After the excitement died down, I looked in the corner of the room, and sitting there beneath that dim light bulb with a piece of red cloth, another shirt and his bamboo needle, was my friend, Mike Christian. He was sitting there with his eyes almost shut from the beating he had received, making another American flag. He was not making the flag because it made Mike Christian feel better. He was making that flag because he knew how important it was to us to be able to pledge our allegiance to our flag and country.”

This year’s truck, which will also be in the motorcycle ride along with other specially themed Volvo trucks, depicts Christian with the theme “We Stand.”

Other images on this year’s truck include a flag-draped casket on a caisson, a mother receiving a flag at a service member’s funeral, and a Marine in dress blues saluting the flag.

Previous trucks have honored other heroes, including Herschel “Woody” Williams, now 94, a Congressional Medal of Honor recipient and Tuskegee Airman who has addressed UAW veterans at Black Lake. Williams will speak at the National D-Day Memorial in Washington and Local 2069 members plan to be there, too, after visiting the Vietnam Veterans Memorial on the National Mall.

The trucks are also used year-round to educate elementary and middle school students about the sacrifices made by their ancestors. Peterson said a great deal of thought goes into what images are put on the trucks. The images are meant to be educational, thought-provoking and must carry some emotion to those viewing them.

“It’s the storyline that we can tell them,” he said. “It’s not just some billboard. It keeps you right on track with the purpose of Memorial Day.”

There will be hundreds of other ceremonies big and small throughout the country where UAW members will demonstrate the purpose of Memorial Day.

“Take time to remember what this holiday is really about – those who gave all for their country,” said UAW President Dennis Williams, director of the union’s Veterans Department. “The freedoms we enjoy today would not be possible without the sacrifices of many brave men and women throughout our nation’s history. They must not – and will not – be forgotten.”

Guardian: Tesla factory workers reveal pain, injury and stress: ‘Everything feels like the future but us’

Send a message from the heart with a hand-arranged Valentine’s Day bouquet! UAW members save 25% with Union Plus.