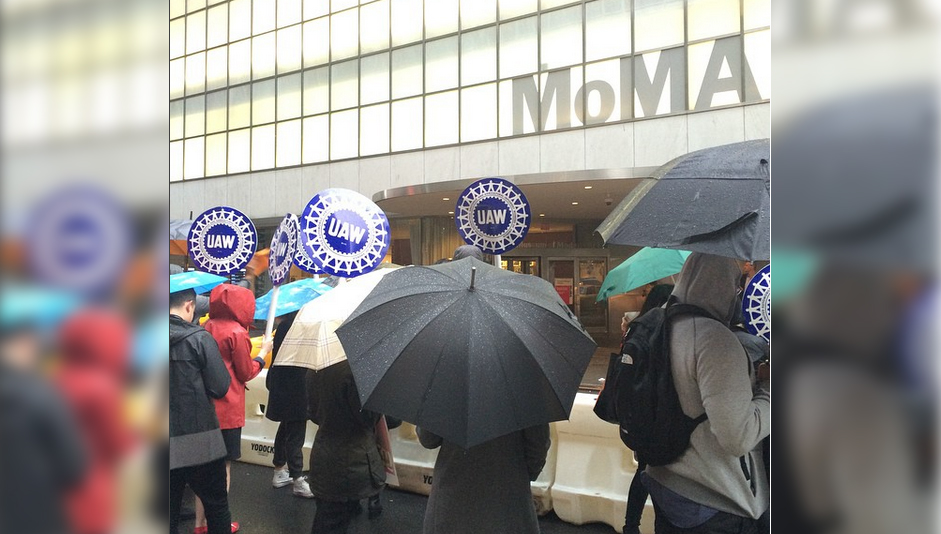 The UAW represents a wide range of workers from many sectors.  In honor of UAW members at museums across the country, we spoke to a member from the Museum of Modern Art (MoMA) in New York.

Megan Grann has been a UAW member since March 2010 and is a steward at MoMA and a delegate to the joint council of UAW Local 2110.

I work in the bookstore at MoMA, which means 98 percent of my day is spent interacting with the museum-going public. No day is entirely like the one before it in that sense. It can be very challenging, of course, but the variety certainly keeps things interesting.

Besides being home to Vincent Van Gogh’s Starry Night which is worth admission by itself, what makes MoMA standout as an important, iconic museum?

MoMA is home to a premier collection of modern and contemporary art, and it really is an inspiring place to spend the day. I work at a satellite store that’s actually inside the museum (as opposed to the main store that is attached via the lobby) and I see all kinds of tours and educational programs pass through my space. The integration between the collection and the museum as a learning space is really quite special, I think.

What did you think about working at MoMA and being part of the UAW, and how has that opinion changed, if at all?

My job at MoMA is the first time I’ve been in a union and it has been an eye-opening experience. I really didn’t know what to expect when I started and was told that I was part of a union. After becoming a steward I quickly learned how important a union is. Of course collective bargaining is a major aspect of that, but I was more surprised by the day-to-day tasks of upholding a contract. I think it’s so important to have the structures in place that a union furnishes, to ensure that every union employee has the right to a safe workplace and the knowledge that there is recourse if they feel that their rights are being violated.

What are the various jobs of UAW members at MoMA?

The UAW covers a very wide range of positions within the museum. Some of these off the top of my head are curatorial assistants, loan specialists, registrars, librarians, visitor services staff, retail and bookstore staff, accounting, development, publications and editing, graphic design, and  I know there are many more that I am forgetting. My title is Selling Specialist in the design and bookstore.

People look at the job of working in a museum to be something cool and exciting, but you and your co-workers really have had to fight for everything that you have there.  What battles have you had to face daily or through negotiations and has there been a benefit in being part of a union?

We signed our most recent contract in 2015 and the negotiations leading up to that were quite tough and we absolutely had to fight for everything we got. This included a substantial raise for “frontline” employees in the museum, meaning bookstore and visitor services staff, as well as yearly 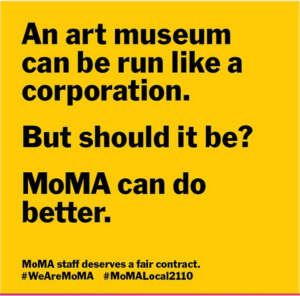 increases for the rest of the bargaining unit. As a bookstore employee, I know that my salary is significantly higher than that paid in the mainstream retail profession, and there is also some room for promotion within the bargaining unit. This is absolutely due to the strength of the union, from the leadership on the local level, to the steward committee at the museum, and concluding with our membership as a whole within the museum.

Corporate boards in museums, especially at MoMA, have some of the wealthiest people on top that you have to negotiate with during contract talks. Can you describe some of the challenges our members face during negotiations?

I really don’t have any interaction with anybody on the board at MoMA, but it’s true that the museum has a vested interest in making money. While that isn’t inherently a bad thing, it does mean that it’s always going to be a battle to maintain, and of course ideally improve, our working conditions and benefits. To that end it’s incredibly important to have a strong union during contract negotiations, but also on a day-to-day basis to ensure that our voice as a bargaining unit of hard-working and talented employees is heard all the time, not just once every three years.

What do you want people to know about working at MoMA and as being a UAW member?

As you mentioned earlier, behind the Starry Night and the rest of the amazing collection at MoMA there are many hard-working individuals who 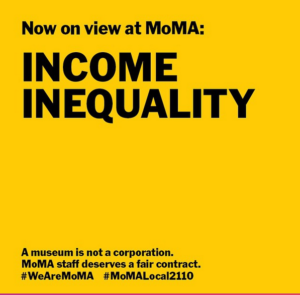 do any number of different jobs to ensure that people have a positive experience when they visit the museum. I think the vast majority of us believe in the mission of the museum and we are proud to work here. But we also have to earn a living, and many of us also have to support a family. We are able to do that at MoMa on the strength of the union.

In what ways are the members at MoMA active in New York and elsewhere?

We do have very active members at MoMA. During our last round of contract negotiations we really relied on our membership for many things, including being vocal and present at numerous demonstrations; putting talent to use in creating graphics and printed matter; and maintaining a presence on social media. All of these things helped us win the contract that we did back in 2015. We hold monthly membership meetings and consistently have a solid turnout. Our members are also active outside of the museum context. MoMA had many representatives in both Washington, D.C. and New York City for the Women’s March last January.

If you’re ever in New York City, please visit the Museum of Modern Art and support our union brothers and sisters.