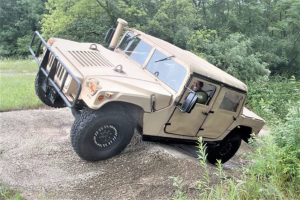 On Saturday July 17, 2021, AM General and UAW Local 5 concluded a weeklong series of events to celebrate AM General’s 50th Anniversary as a corporation building various military and commercial vehicles. That day, AM General and UAW Local 5 held an open house at the AM General Proving Grounds in South Bend, Indiana, for employees and invited guests. The vehicle that AM General is most renowned for is the iconic HMMWV, or HUMVEE, as it is more commonly known. The HUMVEE is the most prolifically manufactured light tactical vehicle in the world, with production numbering into the hundreds of thousands. There were several different versions of the HUMVEE on display for visitors to get an up-close look at. National Guard personnel were also on hand to demonstrate various HUMVEE-related technologies for visitors. There were activities for children and adults in addition to the food and refreshments that were provided. Among the highlights of the day for our employees and guests was the opportunity to go on HUMVEE rides on the test track, ending with a drive through the deep-water fording pit. There were huge smiles on visitors’ faces as they enjoyed an experience that few outside of the military get to have. 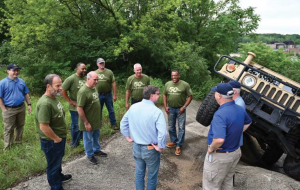 Included in the invited guests and among those with the biggest smiles while getting to drive HUMVEEs were Region 2B Director Wayne Blanchard, Assistant Director Jeff Shrock, Region 2B CAP Representative Danny Ernstes and UAW Local 5 Servicing Representative and AM General employee Joe Taylor III. The company and union were proud to be able to give our UAW leadership a close look at the amazing vehicle that we so proudly produce. AM General President Andy Hove has become quite the historian and has authored several books on South Bend, Indiana, and its military manufacturing history. Fifty years in business is a significant milestone for any company, but particularly for a defense contractor. UAW Local 5 is the oldest existing UAW Local in the country. We started representing Studebaker workers in 1933 and became pioneers for gaining benefits such as group insurance plans. AM General’s lineage goes back even farther, as it is connected to Studebaker which was building horse-drawn wagons for the military as early as 1861 and eventually evolved into the AM General, the largest producer of military vehicles in the world. AM General and its lineage have produced over 1.5 million military vehicles, more than all other defense contractors combined.

UAW Local 5 and AM General proudly supply customers around the world with the best ground military vehicle available. The ruggedness and reliability of the HUMVEE over the years has been proven to be one of the greatest assets to our military men and women, at home and abroad.