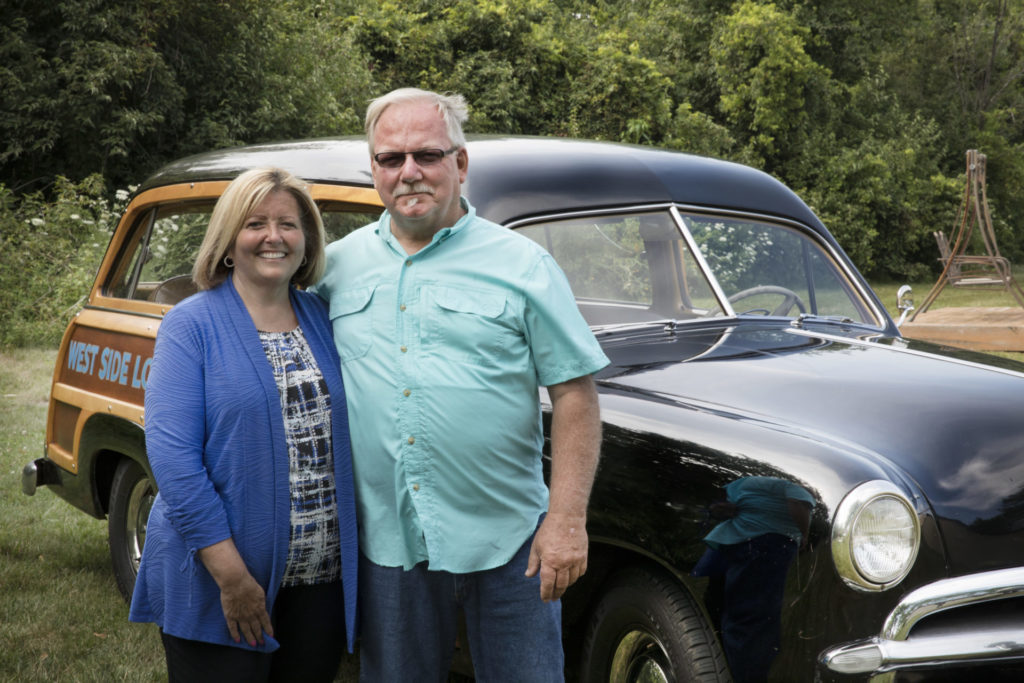 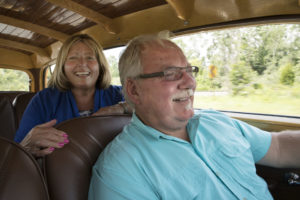 Couple discovers historic gem in a dusty garage and restores it

Looking at the 1949 Ford “Woody” station wagon, it’s easy to imagine it back in another era, a time when a local union would mount a huge speaker on the roof and broadcast messages to members as they left their plants, or maybe one might see it rumbling down a residential street on Election Day in west Detroit, encouraging people to vote for labor-friendly candidates.

Mike Kerwin, 93, a retired UAW international representative and Local 174 member, had driven that Ford while on Election Day duty. He was pulled out of his plant, American Metal Products Corp., to encourage members to vote and to deliver election materials. The car, which has “UAW West Side Local 174 CIO” painted in light blue on both sides on its wood side panels, was a critical part of the local’s communications effort. In addition to political work, it was used at rallies, parades, organizing and other functions where the local needed to reach a mass audience. 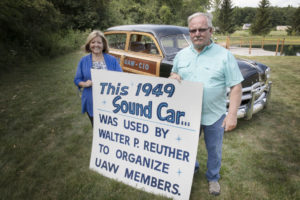 “I remember driving it around the west side of Detroit from one plant to another,” Kerwin recalled. “For any one of our units on strike, a car like that could be quite useful.”

After more than two decades of service but only 23,314 miles, the car was sold to an employee of the local, Fred Adams in 1973, and it seemingly vanished, its glorious past gone to the ages. But, thanks to some lucky breaks, fine craftsmanship, and respect for our UAW history from Jim and Cheryl Bassett, a Carleton, Michigan, couple, the West Side Local 174 Ford Woody is again on the road in southeastern Michigan.

Jim Bassett is a retired Ford Motor Co. sheet metal model maker at its Product Design Center in Dearborn, Michigan. His passion is to take an old car or truck and make it into something no one has seen before. His spacious garage is a testament to his talent — and a busy place. At present, he has a tiny Plymouth concept car from the 1940s and a 1956 Chevy pickup truck that he is customizing. About seven or eight years ago, a friend had noticed the Woody in the garage of Billy Adams, Fred’s son and a local lawyer. The friend inquired if it was for sale and was promptly rebuffed. But he did leave his card with Adams and three years ago received a call that the Woody was for sale. Jim Bassett’s friend called to advise him of the car’s availability and, seeing an opportunity to make a really cool hot rod out of it, bought the dusty wagon three days later, something his wife didn’t initially support. 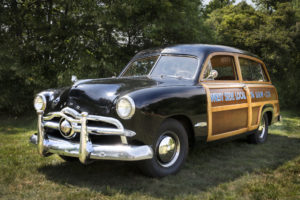 But they became intrigued by the car’s lettering on the side, a union banner that came with it, and the discovery of some old union buttons in the seats and key chains in the glove compartment. The more they learned about the car, the more it became apparent that this car wasn’t simply another old relic.  There were two large old dusty signs that came with the car and – after they cleaned them up, read, “This 1949 Sound Car was Used by Walter P. Reuther to Organize UAW Members.” That could not be immediately verified, but the Bassetts and others are still investigating the car’s historical background. Reuther was the president of Local 174, but had been elected as a UAW vice president and then president long before the car was purchased by the local.

Either way, it’s a significant piece of our history.  Cheryl Bassett did a lot of the research – and just in time. Her husband had already begun fixing a few mechanical problems and removing a couple dents in the roof where the sound equipment had been mounted.

“She goes, ‘Don’t you take another dent out of that car,’” he recalled.

“When we first purchased the car, we didn’t know what it was,” his wife said. “It was like finding a lost treasure.”

“We put the battery on it, cranked it about three times and it started right up and it idled perfectly,” Jim Bassett said, adding that he replaced the brake lines, master cylinder and parts like rubber hoses and gaskets that had deteriorated over the years. Safety, not getting the car back to its pristine original condition, was the most important factor.

“We just cleaned it up and presented it as it is,” he said.

The couple have driven the Woody around southeastern Michigan, including in Detroit’s Labor Day Parade two years ago where they gave Mike Kerwin a ride. They also took it to “The Glass House,” the nickname for Ford’s world headquarters in Dearborn, where it was received warmly by top Ford executives and Cheryl Bassett’s co-workers. She works in the corporation’s legal department.

The couple gets a lot of compliments and questions from people who are current and retired Local 174 members, as well as from the general public. It gives them a chance to discuss local and labor history with young people who may only know that Interstate 696 is named after Walter Reuther, but not much else. For Jim Bassett, it brings back memories of his father, a UAW member, and the union’s role in securing advances for working people.

“The car was used to help promote the UAW and it helped change the world,” Jim Bassett said.

When they got the car, Cheryl Bassett said restoring it to nearly its original state felt like their mission. But the couple would sell it if the circumstances were right, particularly if the new owner would be interested in keeping the car as is. But it also takes up valuable space in the garage and Jim Bassett is ready to move on to his next project.

John Zimmick, current president of Local 174, said he’d love to see the car put to good use in its current state. The local two years ago raised funds to save a labor mural that had been at their local’s previous locations, and was in dire need of clean up due to cigarette smoke damage and age. It is now proudly displayed at the Walter P. Reuther Library at Wayne State University in Detroit. The car deserves preservation, as well, he said.

“I’d like to preserve it for sure,” Zimmick said. “That’s a part of our history, right there.”