Legislative update: Tax Bill a Windfall for Corporations and the Wealthy 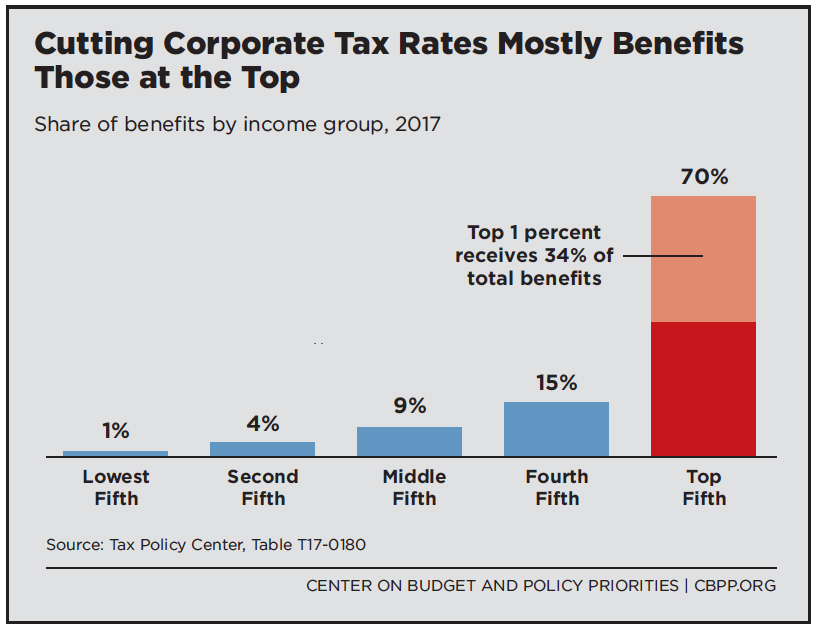 The offshoring of our jobs by multinational corporations has devastated communities for decades. Instead of fixing this problem, the new law makes it worse. Whereas before businesses paid the same tax percentage rate wherever they earned their profits, this new law rewards businesses that create jobs overseas. Companies that create jobs in the U.S. will pay a rate of 21 percent, while businesses that outsource the same jobs will only pay taxes in the foreign countries where the profits were earned without paying U.S. taxes on these profits. Countries that require little or no corporate taxes will become magnets for future factories. If that wasn’t bad enough, these same corporations will get hundreds of billions in tax breaks on what they already owe in offshore profits.

While corporations receive these and other massive tax cuts, they will not be required to create good jobs and pay living wages. Many corporations have made it clear they have no intention of passing on the financial windfall to their workers by investing in new factories and paying higher wages. Home Depot, the world’s largest home improvement chain, announced that it is using $15 billion to buy back shares of its own stock, which will reward shareholders like CEO Craig Menear rather than workers.

Defenders of the new law argue that giving big tax cuts to corporations and the rich will help working people and not add to the national debt, but trickle-down economics have never worked in practice. A few years ago, Kansas passed major tax cuts; its budget went in the red and slashed funding for schools, sanitation, and other essential services. After four years of below-average growth, deepening budget deficits, and steep spending reductions, the GOP-dominated Kansas legislature reversed many of the tax cuts.

The Republican Congress failed to learn lessons from Kansas. The nonpartisan Congressional Budget Office (CBO) estimates that this tax cut will add over $1.4 trillion to the national debt. The right wing will use this rising deficit, which will likely be higher than the CBO prediction, to dismantle important programs and services. The Republican-passed 2018 budget recommends that programs like Medicare, Social Security, Medicaid, and other safety net programs for poor children need to be cut. The new tax law will trigger $25 billion in cuts to Medicare in 2019. In fact, 13 million people will likely lose health care coverage over time as younger healthy people who can afford insurance are no longer required to buy it. Millions will face skyrocketing premiums.

Millions will face higher taxes immediately because state and local tax deductions will be slashed, many deductions will be eliminated and many homeowners in high-cost areas will not be able to deduct their mortgage payments as before. Over 70 million households making less than $100,000 annually will pay higher taxes by 2027. Eliminating the deduction for state and local taxes will make it harder for states to invest in job creation, high-quality education, infrastructure, and other important public services. The much-hyped, lower federal tax rates will expire at the end of 2025, but people will continue to not be able to use these important deductions.

Treasury Secretary Steven Mnuchin and other multi-millionaire supporters falsely claim that this bill will not help them. The facts tell a different story. The carried interest loophole that allows Wall Street tycoons to declare their income as investments remains. Many wealthy people, including investment bankers and real estate moguls, will pay 20 percent instead of the higher individual rate. They further benefit from the new estate tax, which will only apply to couples with estates worth over $22 million, though only the top 0.2 percent were previously subject to the tax. Heirs will continue to be exempt from estate taxes on inherited investments that gained value — a loophole worth billions.

Share your opposition to this new law with your elected representatives and speak out against upcoming attempts to attack our health care and retirement security. Demand no benefit cuts to Medicare, Social Security, and Medicaid to pay for tax cuts for billionaires and multinational corporations.

UAW V-CAP: Investing in Our Future