Legislative Update: Many Programs Will Take a Hit

In today’s hyper-partisan political environment and 24- hour news cycle, avoiding distraction and keeping track of the decisions our elected leaders make can be next to impossible. The actions of Congress and the president impact the safety of our work environments, our wages, affordability of our health care, access to job training, quality of our children’s education, and so much more. It is for these reasons that we must make sure our voices are heard by our leaders.

This summer and fall, Congress will be moving forward on a budget that reflects President Trump’s priorities. The budget sets limits on spending for many public programs and creates a pathway for Congress to make major changes in health care, taxes, Social Security, and safety net programs for the most vulnerable in society without needing any votes from Democrats in the House or Senate.

As required by law, President Trump began the budget process by releasing a plan that overwhelmingly benefits the wealthiest Americans. For example, President Trump’s budget eliminates the Estate Tax, leaving a $174 billion hole in our budget. The Estate Tax was created by Republican President Teddy Roosevelt a century ago and currently only applies to couples who have over $11 million in assets. The proposed budget also provides big tax cuts for corporations and eliminates U.S. taxes on offshore corporate profits, making outsourcing jobs all the more enticing to global U.S. corporations. 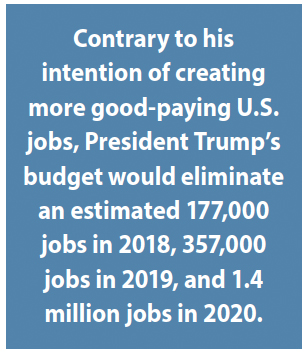 President Trump’s budget cuts are paid for by drastically cutting programs that benefit working families and retirees. If enacted, his budget would make inequality worse and drag down our wages. The Republican-controlled Congress will likely move a budget that is very similar. We know from experience that House Speaker Paul Ryan wants to turn Medicare into a voucher program and radically cut programs that benefit the middle class. With President Trump in the White House, he will now have the opportunity to make his far right-wing ideas a reality.

President Trump’s budget also steals over $1.6 trillion from education, job training, worker safety, legal services, and other programs benefiting working families. The budget decimates the National Labor Relations Board (NLRB) by cutting $16 million in funding and positions, even though NLRB caseloads are projected to increase. At the same time, President Trump’s budget increases funding to the office that audits unions by $8 million. It undermines workers’ pension plans by imposing billions in premium hikes and discouraging the participation of additional employers. The budget also cuts $67 million from programs that defend workers’ rights in other countries.

In addition, President Trump has proposed major cuts to worker safety and health, eliminating the Occupational Safety and Health Administration’s (OSHA) worker safety and health training program, gutting job safety research, and wiping out investigations of chemical accidents. The budget slashes funding for the National Institute on Occupational Safety and Health (NIOSH), the federal job safety research agency, by $135 million, a 40 percent cut in Fiscal Year 2018; closes the Chemical Safety Board; and cuts safety enforcement in the coal industry. Right-wing interest groups have argued for decades that new tax policies will stimulate economic growth, but tax cuts for the wealthy and big corporations have been shown to do very little to boost growth.

UAW members have always been committed to social and economic justice and we believe budgetary and tax policies should reflect that. That is why we support funding for basic human needs, public investments in education and infrastructure, strong enforcement of workplace protections, and programs that help strengthen the middle class and support good wages. Finally, we always look ahead to the future and advocate for policies that will ensure a prosperous and fair-minded country for future generations.

Dental Savings with Union Plus

Region 1A MLK Day of Service