Reject Being Divided by Political Extremism

On Sept 17, the Trump administration announced it was ending a program created by the Obama administration that allows qualifying children of undocumented immigrants whose parents brought them to the U.S. to remain in the only country many of them have ever known for two years on a renewable basis.

The proposal would end the Deferred Action for Childhood Arrivals (DACA) program in six months.

Following the announcement, children of undocumented immigrants in the DACA program were given only one month to apply for a two-year renewal. This decision would upend life for an estimated 800,000 young people, known as Dreamers, who live and work in the U.S., the only country most of them have ever lived within. The abrupt termination sent shockwaves across communities and families throughout the country.

Behind every number is a member of our community. The New York Times recently profiled a cross-section of the Dreamers who want to remain in the United States, a nation made up of immigrants:

Take for example, Miriam Ochoa- Garibay, an 18-year-old student at the University of California, Riverside. She was born in Mexico but has lived in the United States since the age of two. Ochoa-Garibay has excelled in her academics, receiving honors. “It wasn’t until I got to high school where I realized that maybe it was going to take more than just good grades to go to college. I became really aware that I was undocumented. I became fearful that I wasn’t going to have a better future because I was undocumented. DACA means everything to me.” Her future is at risk. 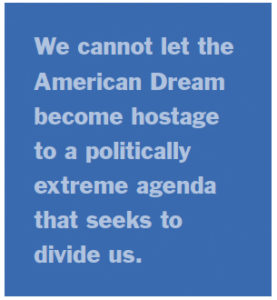 Same goes for Jin Park, born in Korea and the son of a restaurant laborer and a nail salon worker. Park is a student director of a nonprofit organization in Flushing, New York: “DACA fundamentally changed how I envision my place in the U.S. DACA liberated me to apply to college freely and openly, which allowed me to attend Harvard College, where I am now a junior studying biology and government,” Park told the newspaper. DACA allowed him to start his own nonprofit, Higher Dreams, to help the other 65,000 undocumented high school students applying to college every year.

Victor Esparza, an IT professional from Hartford, Michigan, told the Times he recalled graduating from high school, and as his friends went off to college, he began living in the shadows, fearful that one driving mistake would get him deported, even though he has been in the U.S. since age 7. He said the day he received his employment authorization card through the DACA program was the day he began to live. He’s successful and contributing to our great nation.

The above stories are a few of the tens of thousands of examples in which the contributions of young people in the DACA program have made. Over two-thirds have purchased a car, 91 percent work or attend school and many serve our country as military personnel. Immigrants pay local, state and federal taxes just like the rest of the hardworking families and individuals in our nation.

Unfortunately, the Republican-led Congress announced in late October that it was not going to include legislation to continue DACA in an end-of-the year spending bill. This is an unacceptable decision from a moral and economic perspective. It is not what the UAW is about and not what our nation is about. President Williams spoke out against the decision to end DACA:

“I am deeply disappointed by the Trump administration’s mean-spirited decision to phase out DACA,” President Williams said, adding that it was now incumbent on the Republican-led Congress to pass the bipartisan DREAM Act.

“Enough is enough! America was built on immigrant labor. We cannot let the American Dream become hostage to a politically extreme agenda that seeks to divide us,” Williams said.

We need to stand by Dreamers because the freedom we all cherish here in America was built by immigrants, who were just like the Dreamers. Nearly every American can trace their own family roots back to immigrants. Standing up for people of all backgrounds is part of who we are as a union, and who we are as Americans. Call (866) 287-6350 and tell your member of Congress to pass the bipartisan DREAM Act today.