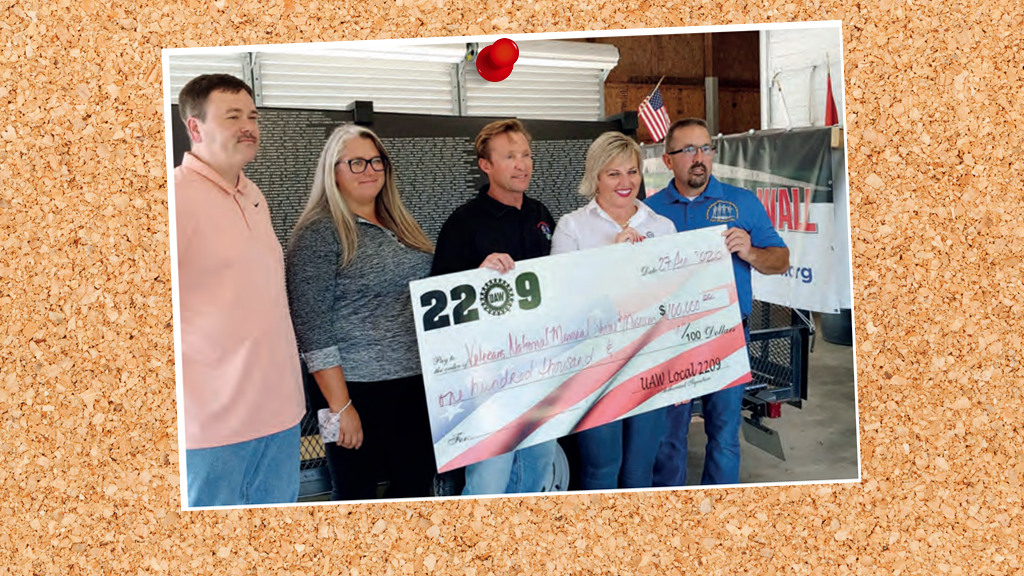 Members of Local 2209 in Fort Wayne, Indiana, consider it part of their job to make sure the public fully appreciates the sacrifices made more than a half century ago in Vietnam.

For Greg Bedford, the chairman of the local’s Veterans Committee, it’s that and more as Veterans Day 2020 approaches.

“I want to make sure that, in my lifetime, no veteran is ever forgotten,” the millwright/ welder said. It’s why earlier this year the local announced it would donate $100,000 to support the Vietnam Wall project of The Veterans National Memorial Shrine & Museum. The project is an 80% replica of the National Vietnam Veterans Memorial in Washington that lists the names of 58,318 Americans who gave their lives in service to their country.

“We are proud and honored to support this important project and are donating a check for $100,000 for the installation of the wall. This lasting tribute to the fallen heroes of the Vietnam War will bring thousands of new visitors to our community,” said Local 2209 President Holli Murphy.

“Our members of Local 2209 voted unanimously to support this treasured monument,” Murphy added. “We will also provide the Veterans Memorial Shrine and Museum with an additional $50,000 for operating expenses over the next two years.”

The donation will allow the museum to break ground on the project and move it closer to its goal of raising $1.7 million. The museum, located in Fort Wayne, is an all volunteer nonprofit 501(c) charity. It operates a 40-acre memorial grounds featuring memorials for all wars, a box car from France that was part of the “Merci Train,” which was 49 World War I-era boxcars sent to the U.S. from France that were filled with gifts as a thank you to the United States for helping war-torn Europe after World War II, and the museum. According to its website, its objective “is not only to honor the dead and all who served, but also to provide inspiration for the living to search for and work for a better America.”

Bedford also is the shrine and museum’s commander. He thanked Local 2209 members generosity in the past and for its future commitment.

“We are overwhelmed by the generosity of Local 2209 and their many members. Their support over the years has been critical to the success of our operation and will continue to be for years to come,” Bedford said.

They have raised an additional $200,000 from area companies and the community at large, with donations ranging from $10 to $1,000. Local companies are pitching in with services, as well. Among them, Hagerman Construction has agreed to perform construction work on a pay-as-you-can basis, meaning construction won’t be delayed because of lack of funds. Another company, Crosby Excavating, is donating its services, he said.