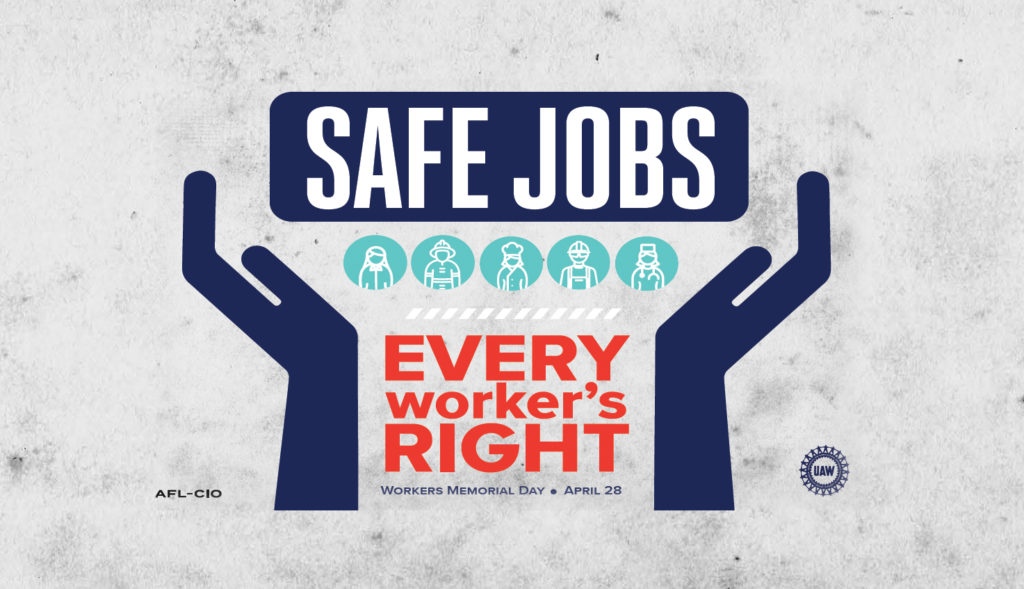 Workers Memorial Day is April 28, the anniversary of the effective date of the Occupational Safety and Health Act. An estimated 553,000 lives have been saved by the worker protections established in the OSHA regulations. Now these regulations are under attack. Resources to address safety hazards are being cut. UAW members face a host of hazards in every sector:

No one can argue with the fact that OSHA regulations save lives. And in testimony before Congress, George Washington University professor David Michaels pointed out that there is no evidence that OSHA standards kill jobs. The truth is that, “OSHA standards don’t kill jobs. They stop jobs from killing workers.” OSHA standards are really “worker protections” and, “When you hear someone talk about rolling back OSHA regulations, they’re really talking about endangering workers.”

Michaels points out that when OSHA was formed 48 years ago 14,000 workers were killed on the job. That is an annual rate of 18 deaths per 100,000 workers or 38 workers killed every day. This is more than double the number of workers (6,081) killed that year on the battlefield in Vietnam. Through a combination of OSHA regulations and enforcement, as well as the concerted efforts of labor unions and their allies, the workplace fatality rate has plummeted to 5,190 deaths on the job or 14 deaths per day. The U.S. workforce has doubled since the 1970s, so the current rate is five times lower (3.6 deaths per 100,000 workers). If you talk to the families of those workers maimed and killed on the job, these numbers are far from comforting.

The devastation felt by coworkers and families drains the pages of numbers of meaning. A single death of a coworker, a mother, father, son or daughter is one too many. And UAW members have suffered many traumatic injuries which could have led to death if not for emergency responders and advances in medical treatment.

All accidents and injuries are preventable. Workers Memorial Day reminds us, UAW members must always be vigilant and always work toward the main goal—coming home safely each and every day.

Since the last report in Solidarity magazine two more UAW members have lost their lives in workplace accidents. We mourn the loss of these members and send our condolences to their loved ones and coworkers

Brother Petersen was working alone modifying a high-pressure tank that had been obtained from a supplier. The tank was part of a large control valve assembly used to divert steam from power plant turbines. The 240-gallon tank was pressurized by shop air. Petersen was in the process of plumbing the tank and checking for leaks in each of the pipe plugs. He used an impact wrench to loosen a pipe plug. As pressure was released, he was struck and killed by the plug and tooling. Approximately 1 ½ hours after being struck, Brother Petersen’s body was found by a coworker. Near misses had occurred on at least two occasions when pipe plugs had blown out of the tanks, but no safe operating procedure had been developed for pressurizing the tanks.

Brother Bridgewater had been assigned to work on a malfunctioning loading dock. He accompanied two millwrights with a repair cart to the exterior to repair the dock lock. After the mechanical repairs were completed the millwrights left the loading dock area. At approximately 1 a.m., Brother Bridgewater was found unresponsive outside the loading dock at ground level. He was near exposed electrical wires; however, the coroner’s autopsy shows crushing injuries to head, ribs and clavicle. It is likely that he was struck and pinned by a tractor trailer while inspecting electrical wires.

Much Work Remains to Be Done