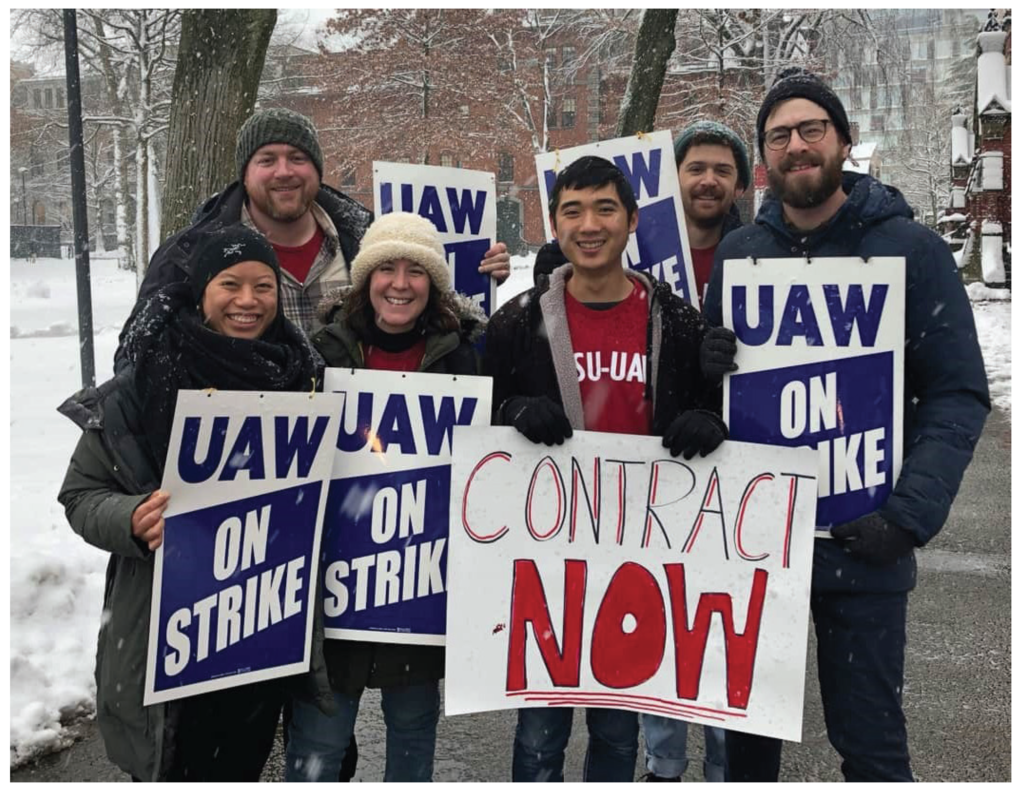 The victory for Harvard’s academic workers came after an often-contentious two-year battle with the university.

It’s been a year of unparalleled uncertainty in higher education. Perhaps no one knows this more than members of the Harvard Graduate Students Union-UAW (HGSUUAW), who went on strike for four weeks in December to fight for their first-ever contract.

On June 30, the over 4,000 academic workers ratified a contract with the university with 97 percent voting in favor. The one-year agreement, which became effective July 1, includes 2.8 percent wage increases, improved health care and a $350,000 child care fund. A minimum wage of $16 per hour was won. There are also long-sought contract provisions designed to protect HGSU-UAW members from harassment and discrimination. It also includes measures designed to protect academic workers during the Covid-19 pandemic.

“Student-workers at Harvard make this university run by teaching courses and conducting cutting-edge research,” said Jenni Austiff, a member of the bargaining committee and fifth-year Ph.D candidate in Organismic and Evolutionary Biology. “It is about time that we have a union contract that ensures we can do that work in a safe environment.”

Other improvements include paid bereavement and sick days, and protection for workers when they take extended unpaid leaves for medical emergencies.

The agreement is the result of an often-contentious two-year battle with university. The one-year contract, negotiated during the uncertainty caused by the pandemic, means HGSU-UAW members will be back at the bargaining table soon. It is expected that the bargaining committee will look to build upon the harassment and discrimination provisions won in this agreement.

“If the administration doesn’t agree to addressing our core concerns in our next contract, we commit to organizing for a strike to win these rights and benefits through collective action,” the bargaining committee said in a statement.

In another higher education victory, by a vote of 859 to 7, members of Columbia Postdoctoral Workers-UAW (CPW-UAW) have made history by ratifying the first union contract for postdoctoral researchers at a U.S. private university. The new contract makes Columbia postdoc minimum pay, at $60,000, the highest in New York City, provides meaningful protections for survivors of harassment and assault, establishes access to six weeks of paid parental leave, and includes new rights for international workers, who have been under attack by the Trump administration.

“We organized, fought for and established a more just workplace, with more respect for the critical research we perform at Columbia,” said Melissa McKenzie, a postdoctoral research scientist working on RNA splicing in neural development in the Systems Biology Department. “After going years with the lowest starting salaries in New York City, Columbia postdocs will now have the highest minimum salaries in the city — a giant leap forward for researchers.” “The UAW is proud to welcome all of these workers into our growing union family,” said Beverley Brakeman, director of UAW Region 9A, which includes New England, eastern New York (including New York City), and Puerto Rico