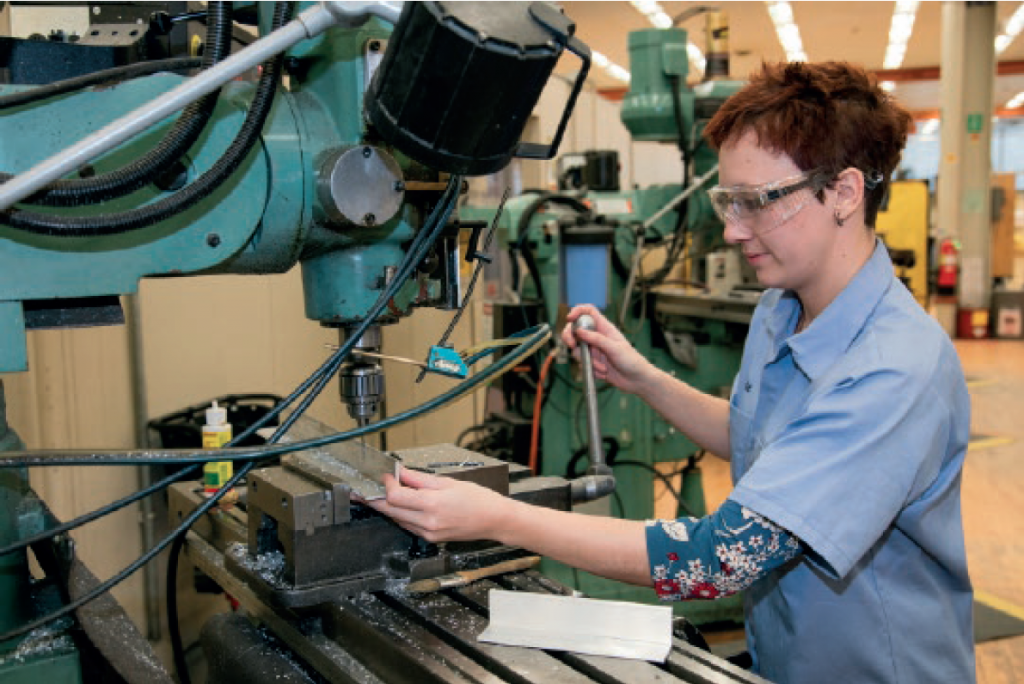 Rachel Harbin has always liked working with her hands and has a love for automobiles that runs in the family bloodline.

She also has a love affair with learning, earning an associate’s degree, a bachelor’s degree and is close to earning her master’s degree.

With a pedigree like that, it’s not hard to understand why the Local 160 metal model maker at the General Motors’ Warren (Michigan) Tech Center in December was named the Michigan Apprentice Steering Committee, Inc.’s (MASCI) Apprentice of the Year. The metal model maker journeyperson acquires skills in a variety of disciplines, including welding, sheet metal work, machining and computer-assisted design.

“It’s kind of an umbrella trade for various work with metal,” said Harbin, who earned her journeyperson’s card in December. It takes 7,328 hours of on-the-job training, plus 700 hours of class to successfully complete the apprenticeship program. But once completed, there is a tremendous sense of satisfaction.

“I love my job. From where I am right now, I think would be very happy here for many years in the future,” she said. “I get to see things that are not going to hit the market for four to five years down the line.”

Harbin gets to assemble and disassemble various GM prototypes and work with design engineers to ensure  what is designed for a vehicle will actually fit and function as it’s supposed to.

“It’s a lot of fun problem-solving as you go,” she said. “You are given a job where you are given an end result. How you get there is up to you. It’s got a lot of variety. You are never bored. It would be very frustrating for me to do the same thing every day and not learn new things.”

Her willingness and eagerness to learn played a huge part in her winning the award, which comes with a plaque and $1,000 prize. Lorna Storrs, Local 160’s apprentice chairperson, recommended her for the MASCI award.  “She is always prompt, pleasant and ready to do her job,” Storrs wrote in her recommendation letter. “I can think of no better way to appreciate the time, energy and willingness to learn that Rachel has demonstrated than to honor her with this award.”

UAW Secretary-Treasurer Gary Casteel, who directs the union’s Skilled Trades Department, said Harbin’s success demonstrates how unions help workers improve their skill set so that they may advance their careers.

“Rachel Harbin sets a wonderful example of what can happen when motivated union members take full advantage of the opportunities that their union has negotiated through the collective bargaining process,” Casteel said. “It’s also a great example set by our existing journeypersons who help the apprentices learn as they earn.”

Harbin is quite handy. Her grandfather was a tool- and-die maker and her father began as a mechanical engineer. Both men became plant managers by retirement. Her mother was the daughter of a machinist and an apprentice tool-and-die maker herself before being laid off and having children. She taught her daughter many skills, including how to not let her small stature be a disadvantage in a male-dominated field that some may perceive as requiring exceptional strength. But Harbin did not have a lot of machining experience. She credited the journeypersons she worked with helping her learn the trade and earn the journeyperson’s card. One in particular, metal model maker Holger Lafrenz, was especially helpful. Apprentices must learn how to do the job correctly and safely the first time so they don’t have to unlearn bad habits.

“You are always with a journeyperson,” Harbin said. “It’s important for you to learn to do it the right way the first time. It was a little intimidating coming in but everyone that I’ve ever worked with — if you demonstrate an interest and if you pay attention to what they are trying to teach you — they are more than willing to help you.”