James Martin is on temporary total disability because of the time he spent working at the Fuyao Glass plant in Moraine, Ohio. He suffers from diminished lung capacity that, according to his doctor, was caused by working with isocyanate glues and primers, powerful chemicals which are known to cause asthma and other breathing problems.

Martin’s life has been drastically changed by the fast-growing Chinese company’s inattention to worker health and safety. He knows he would likely still be working if he was represented by the UAW. 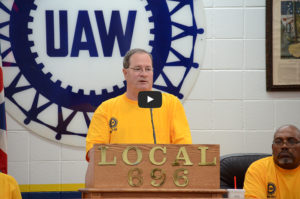 “I know if the UAW had been there and had a contract, they would have had my back,” Martin said at a recent town hall at Local 696 in nearby Dayton with his co-workers, UAW members and community supporters. Fuyao workers want to organize their own union with the UAW to fix the many health and safety issues at the massive former General Motors plant and have a voice on the job.

Martin began work in February 2015. On his first day, management at the plant, which is the world’s largest auto glass manufacturing facility, held a safety class in which half of it was spent learning about some of the dangerous substances he and his co-workers would be working with. They discussed the importance of Safety Data Sheets (SDS) that explain in detail about the chemicals and their potential hazards.

In mid-March, after his first two hours of exposure to chemicals in the manufacturing process, Martin and some of his co-workers began to experience headaches, lightheadedness, nausea, and a burning sensation in their eyes and throats.

“We mentioned it to our supervisor and he ignored our complaints,” Martin said.

At the end of their shift, the workers checked the containers of chemicals they were working with to see if they could get some of the warnings off the cans.

“We could not,” he recalled. “They were printed in Chinese.”

From mid-March until mid-June, Martin and his co-workers repeatedly asked for respirators and the Safety Data Sheets.

“All we were told by our supervisors was, ‘No need.’”

What really angered Martin and other workers was when they were shown a training video that was filmed in China. When the video got to the part of the manufacturing process that he works at, the Chinese workers were all wearing respirators. Martin says they were told by the company that they use different chemicals in the United States.

Martin doesn’t want what happened to him to happen to other workers. Without a union to have a voice in the workplace, Martin fears for the health and safety of his former co-workers.

“Fuyao must understand and accept that employee safety must always be their primary concern,” Martin said.

The town hall came just days after the National Council for Occupational Safety and Health listed Fuyao as among the “Dirty Dozen” most dangerous employers in the United States. It noted that employees were frequently working around broken glass and sharp edges without proper protection, and are exposed to the risk of amputation.

In March, Fuyao, OSHA and four workers represented by the UAW reached an agreement that requires the company to make major safety improvements to the plant, including addressing serious issues regarding machine safety – such as workers who enter machines to make repairs without proper safeguards and the lack of equipment that prevents workers from getting caught in machinery. But other health and safety issues remain. For instance, OSHA also is investigating possible safety violations alleged to have caused serious respiratory problems, cuts from glass shards, unguarded machines, and exposure to dangerous levels of furnace heat. In February, workers filed charges with OSHA detailing the incidents, including workers using dangerous adhesives without proper breathing protection.

At the town hall, worker after worker told the audience of about 200 of the many problems in the plant. Larry Yates told of safety issues that go unaddressed and inconsistency in safety 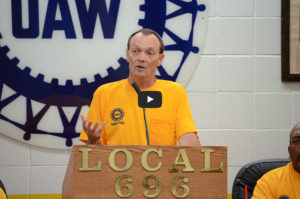 rules. Yates filed an OSHA complaint after being assigned to enter a furnace filled with shards of broken glass to make repairs while half of the furnace was still operating at 650 degrees Fahrenheit. He also spoke about a co-worker who was fired two days after sustaining more than 100 stitches due to a workplace accident.

When workers saw that a few people fighting alone wasn’t enough to make Fuyao address their concerns about health and safety or other issues, they started joining together to form their union. 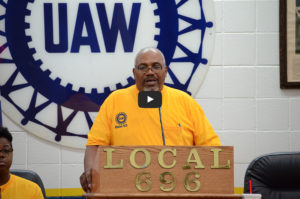 Teodore “Rick” Searcy told the audience he would like his son to have the chance to go to college, but that dream won’t happen if he and his co-workers don’t have a voice on the job.

Those in attendance gave Searcy a standing ovation.

UAW Region 2B Director Ken Lortz told Fuyao workers that the union will stand behind them in their battle to improve their lives on the job.

“There’s no reason why Fuyao can’t provide the good jobs and the safe jobs that Dayton and Fuyao workers deserve,” Lortz said. “And there’s no one who knows better how to fix the problems at Fuyao than the workers who are doing the work. Yet Fuyao refuses to listen to its workers.”

Since workers began the drive to have a collective say in their workplace, the Chinese auto glassmaker has raised wages $2 an hour. But wages and health and safety are not the only 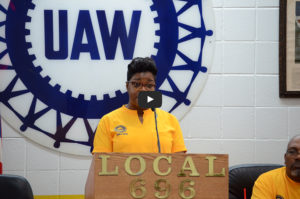 issues that workers want to address. Lisa Connolly said the attendance policy allows for five paid days off, but can only be used at the company’s discretion.

“In my opinion, the policy is flawed,” Connolly said. “It is set up for failure.”

Several area public officials and community members told the workers that Fuyao needs to step up by stepping back from its anti-union posture. The Rev. Dr. Rockney Carter, senior pastor at the Zion Baptist Church and president of Leaders for Equality and Action in Dayton, said workers at Fuyao want to work in a place that is sensitive to their needs not only as employees, but as people.

“The concern for real is how people are being mistreated,” Carter said. “It’s a moral issue.”

Ohio House of Representatives Minority Leader Fred Strahorn; Montgomery County Clerk of Courts Gregory A. Brush; Mark Owens, Montgomery County Democratic Party chairperson, and clerk of court for the Dayton Municipal Courts; and John Agenbroad, mayor, City of Springboro, were among the many community members who addressed the workers.

Several representatives of UAW locals from Ohio, Indiana and Michigan attended to show their support for Fuyao workers. Jack Castleman, president of UAW Local 3059 in Evansville, Indiana, represents workers at the Pittsburgh Glass Works (PGW). Workers there organized 10 years ago and are now on their third contract. Gains made in Evansville and at a PGW plant in Crestline, Ohio, could be undone by Fuyao’s low wages and subpar working conditions.

Their most recent contract, however, took just 12 days to resolve and was approved by 72 percent of the membership. Since they organized, they’ve made great strides in health and safety, including the formation of a joint company-union health and safety committee.

“It’s manned on both sides. It meets every month,” Castleman said. “We get things done in our plant, safety-wise, and both sides benefit from it. It’s worked, it’s flourished and we’re proud of it.”

But he visited with Fuyao workers recently and was appalled by some of the stories about dangerous working conditions at the plant.

“I couldn’t believe those kinds of working conditions existed in this country,” he said.

Local 3059 will be there to help them change their workplace for the better, he added.

“We’re behind you. If you need us for anything, you holler. We’re here.”