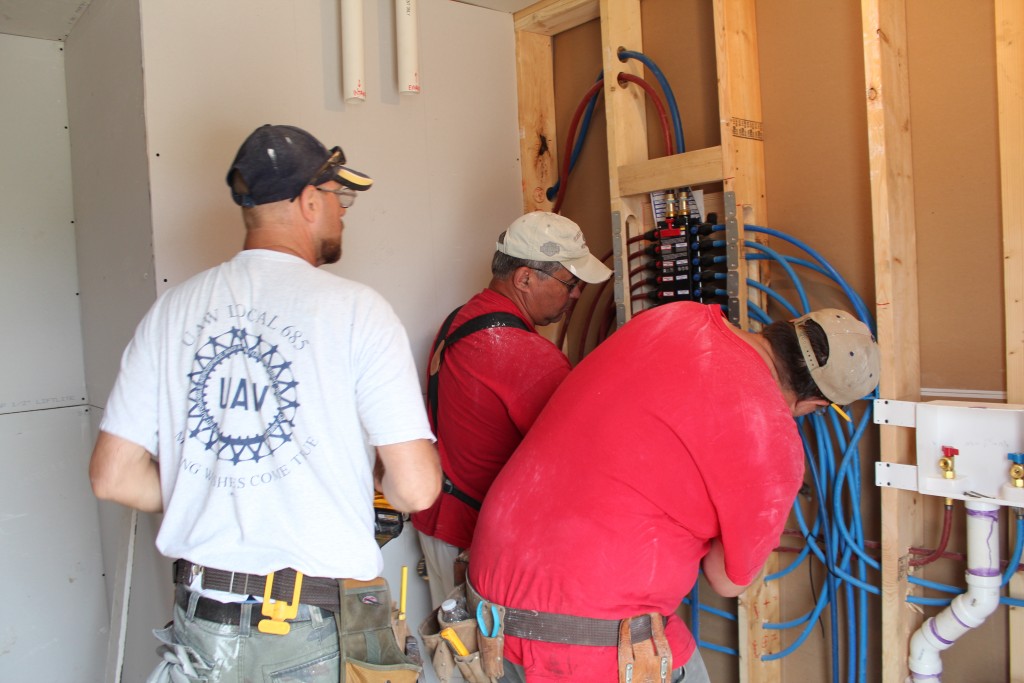 Claudia Stewart worked at the Delco plant in Kokomo, Indiana, and actively promoted unionization in the mid-1930s. Eight decades later, her successors in the union movement have lent her grandson a helping hand that would give the Afghanistan veteran a house for himself and his 9-year-old daughter.

Johnathan Stewart served with the U.S. Army as a combat engineer for two tours in Afghanistan. The single father was selected as the recipient of the Habitat for Humanity Veteran Build.  Habitat for Humanity approached Local 685 member Gary Rhinebarger to see if the local might be interested in supporting the “Veteran Blitz Build.” The membership unanimously supported the project to build Stewart’s home in less than two weeks this summer.

“I thought a veteran build would be a great idea and our membership strongly supported that idea.  We pride ourselves on supporting veterans and assisting throughout the community. This project seemed to be a perfect fit,” Rhinebarger said. “As a veteran myself and appreciating the sacrifices of others, this is the right thing to do.

“Our people from the local plants are some of the most giving people I know,” he added. “It was great to be a part of it. This will always be a highlight in my life.”

No doubt it’s a highlight for Stewart, who now has a place of his own and a street filled with children for his daughter Bailey to play with. Since his return from Afghanistan in June 2010, Stewart has jumped from house to house, hoping one day to eventually embrace their permanent home.

“We have never been in a place with other kids around,” said Stewart. “That’s something she’s never had before. She will finally have some other kids to play with. … I have only heard good things about this neighborhood.”

Habitat for Humanity offered several build sites to Stewart. He didn’t know it at the time, but the site he selected belonged to a World War II combat engineer veteran.  The home on this property had been destroyed by the same tornado that demolished Local 685 union hall in 2013.  The property was donated to Habitat by the deceased veteran’s sister.

Cheered on by a huge crowd, the keys were presented to Stewart and his daughter by the UAW, Habitat and Fiat Chrysler Automobiles on July 4 at the Haynes Apperson Festival. The next Sunday, the home was blessed by UAW chaplains. It was an emotional time for the father and daughter.

“This all makes me want to get very emotional. I’m not really big on feelings and I don’t want to get extremely emotional out there,” Stewart told the Kokomo Tribune that day. “I have learned how to suppress my feelings over time, but this is a bit overwhelming.”

It was also emotional for UAW members, including Local 685 President Carl Greenwood.

“When I was first approached about building a house in a week and a half, I thought they had lost their minds. Then I came to the site and I saw the commitment of the Local 685 brothers and sisters, and with Habitat having it down to a science, I had no doubt,” Greenwood said. “I want to say without the union promoting this and being ingrained in the community, a lot of these things don’t happen. We are the community and we do the right thing. We are very blessed to live in a free country, one that raises the flag and honors our veterans. I am so glad John and Bailey have this home. “It makes my heart exceedingly glad.”

The home is built with 100-percent American-made materials and built by Local 685 members and local contractors. Generating funds to pay for the build, furnish the house and feed the volunteers was accomplished through T-shirt sales, a raffle sponsored by the VFW and soliciting donations within the community. All contractors building the new Local 685 union hall donated supplies, services, or made monetary donations.

The home was complemented with many surprises including landscaping, home furnishings and a garage. In addition, a flag pole was set and an American flag previously flown over the U.S. Capitol was donated by Sen. Joe Donnelly, who also spent time swinging a hammer on the project. A side benefit of the build turned out to be the interaction with John’s new neighbors in the community. As meals were provided for the volunteers, neighbors joined in and it became a chance for them to experience UAW community involvement.  Many friendships were formed throughout the build as everyone got to know one another.

“This project was a good combination of the union and the company working together for the good of a local veteran,” said Local 685 member Pat Skarda. “It doesn’t get much better than that.”