Fighting for the protection we deserve 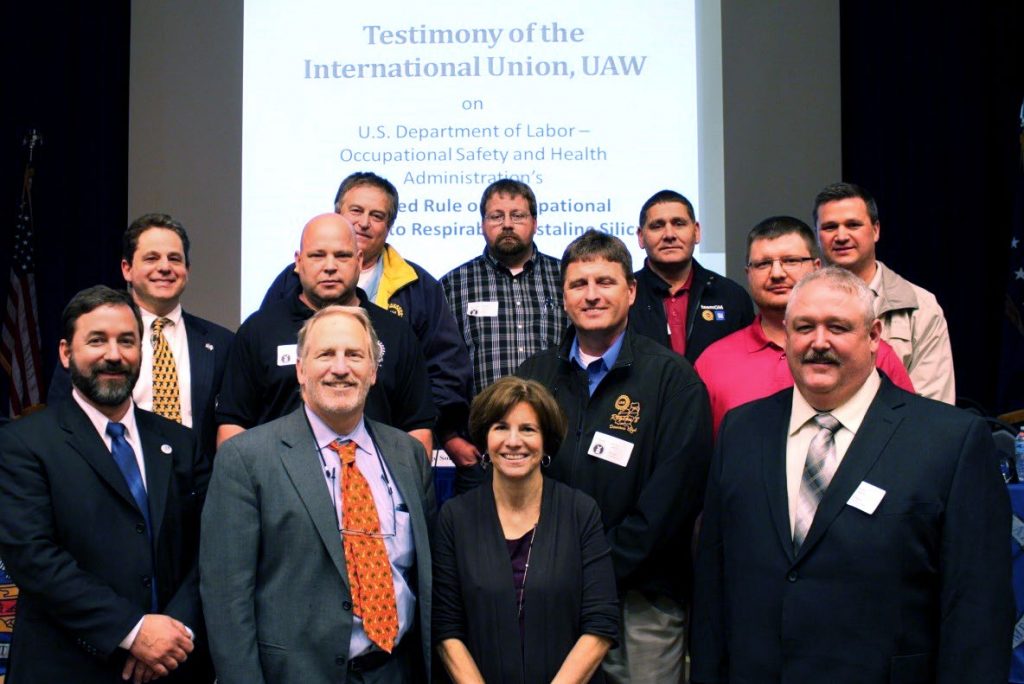 In late March, millions of working people earned a long and hard-fought victory when the Occupational Safety and Health Administration (OSHA) took action to curb lung cancer, silicosis, chronic obstructive pulmonary disease, and kidney disease in America’s workers by limiting their exposure to respirable crystalline silica. Crystalline silica is a ubiquitous mineral, found most commonly in the form of quartz.

These tiny dust particles can cause lung cancer, emphysema, kidney disease and other diseases. The rule will save more than 600 lives and prevent more than 900 new cases of silicosis each year, once fully implemented. It is projected to provide net benefits of about $7.7 billion annually, although it is impossible to put a value on human life.

The adverse health effects of inhaling silica dust have been known as far back as ancient stone-cutting in Greece and Rome. We have known how to prevent silicosis for at least 80 years, as wetting down the dust or improving ventilation significantly cuts down the risk of unhealthy exposure. In the mid-1930s, U.S. Secretary of Labor Frances Perkins convened a panel of experts to study this issue.

“This rule will save lives. It will enable workers to earn a living without sacrificing their health,” said current Secretary of Labor Tom Perez. “It builds upon decades of research and a lengthy stakeholder engagement process — including the consideration of thousands of public comments — to finally give workers the kind of protection they deserve and that Frances Perkins had hoped for them.”

For decades, the UAW has fought to protect workers from exposure to silica. This new rule will help UAW members who work in glass manufacturing, foundries, plastic injection molding, ball bearing manufacturing, auto and truck assembly, auto repair and heat- treat operations. Additionally, welders, metal fabricators and paint manufacturing members will be positively impacted by this new rule. Workers are also exposed to silica in new industries such as stone or artificial stone countertop fabrication and hydraulic fracturing and will be better protected as a result of the new standard.

OSHA had a thorough process to develop the standard that included 14 days of public hearings (in which UAW members and our health and safety representatives participated). During this period, more than 200 stakeholders presented testimony, and over 2,000 comments were accepted.

For Tom Ward, a masonry trainer for the Bricklayers and Allied Craftworkers in Michigan, the final silica rule was personal. When Ward was young, he thought his dad was Superman, especially because he worked with his hands. Ward told Secretary Perez about how heroic and invincible his father seemed, about his athleticism and his work ethic. But years of working as a sandblaster had taken its toll and silica turned out to be his kryptonite.

When he was just 34 years old, Ward’s father was diagnosed with silicosis, a progressive, incurable disease afflicting workers who drill, cut, crush, or grind materials like concrete and stone. The disease suffocated him, and he literally worked until his dying day. His father’s death from silicosis was not just a personal tragedy for Ward and his family; it was a financial crisis, too, because they lost everything.

Inspired by his father, currently Ward works in the crafts trades and teaches many of the safety measures that could have saved his father’s life. He believes we need a better, updated safety standard that protects people who work around silica dust. Ward joined Perez at OSHA’s announcement of the final silica rule.

Progress has been slow in large part because powerful industry groups have always fought against stricter standards. OSHA last acted in the 1970s, and even those standards were out of date from the moment they went into effect.

The new protections will take effect in June 2016, but businesses will have ample time to comply. In addition to reducing the exposure limit, the final rule will require that employers limit exposure through engineering controls, creating an exposure control plan, providing medical exams  to exposed workers, and training workers on the risks of exposure.

From the time the UAW was formed, worker protections have been a part of what we do. We have always worked hard to ensure the health and safety of the lives of men and women in America, and we worked equally as hard to help complete this rule. Our brothers and sisters who work with steel, brick and stone — who build our homes, operate our foundries and maintain our roads — deserve nothing less than the best possible protection. Passage of this final rule serves to protect their right — one of our most basic rights of all — to come home safe and sound after a hard day’s work.