Fighting for our members 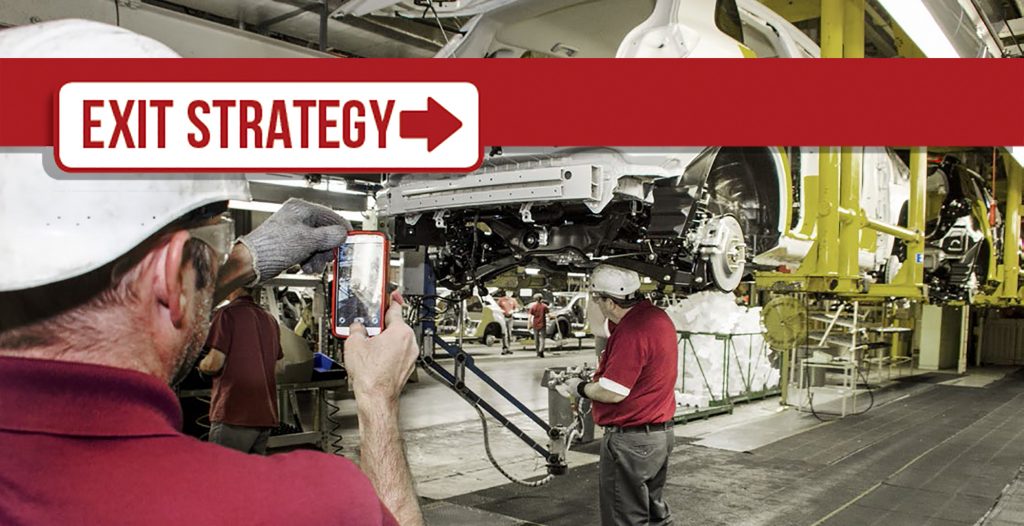 A plant closes, but having the UAW there is a giant plus

When Terry Williams started her job at the Mitsubishi Motors North America (MMNA) plant in Normal, Illinois, in 1989, she said it was like winning the lottery. For the next 26 years, she continued to build her life, raised a son and had a job she loved and cherished. Then at the end of July, with just three years left until her retirement, Williams and her co-workers learned that their plant would close. Nothing could prepare her and the 994 other members of Local 2488 for the shock and devastation that now faced them.

With the plant closing and the current UAW contract ending Aug. 27, a new contract had to be negotiated in order to give the membership security and an exit plan until all production stopped. Although nothing in the collective bargaining agreement would erase the anxiety and uncertainty of knowing they would soon be without jobs, it helped cushion the blow and gave options to members that simply would not be available had they not had a union.

“Because of the UAW and our contract, I am able to retire early if I choose to draw my pension,” production associate Kelli Harrison said. “So I’ll be 51 years old and drawing a pension, so I’m pretty blessed to have that option out there.”

Local 2488 Bargaining Chairman Roger Goodwin and the rest of the UAW bargaining team worked hard and tirelessly to ensure that he and his co-workers left with the best possible severance package.

“Prior to the bargaining we went through, only 8 percent could retire with full pensions. After we negotiated the severance package, 60 percent of our members can now retire with full pensions,” Goodwin said. “That’s a pretty big deal. Everyone is entitled to a lump sum depending on age and years of service. Also, almost every member has either retiree healthcare available or healthcare continuation for up to 16 months or the ability to cash out.”

Goodwin added, “The average age in the plant is about 54 years old and 90 percent of them have been here between 26 to 28 years. This is going to force many of them to leave the area and relocate to new jobs. The community will really be hurt by this.”

Nearly three decades ago, when ground was broken in this central Illinois town outside of Bloomington, workers were excited about their future.

Roberto Avina remembers the excitement of getting recalls the longevity of the plant was called into question since the first car rolled off the production line. “Since I started back in ’89, they were telling me that the plant was going to last only 10 years.”

The chartering of UAW Local 2488 soon followed on Aug. 28, 1989, making Mitsubishi’s only U.S. manufacturing facility the first transplant auto manufacturer to have its workforce become UAW members. For then-Region 4 Director and now- UAW President Dennis Williams, it was a proud and historical achievement in union organizing.

Avina continued: “After we became a UAW plant, it helped me to get another 16 years after that.”

For a smaller car company, having an auto plant in the United States was always a struggle as Mitsubishi continually faced tough competition globally in car sales. With a plant closure in perpetual conversation, hope would come in 2011 when the UAW worked with the company and state to secure a new car line to be built at the plant.

“It’s been kind of stressful because you never knew from day-to-day how long this would continue to go on because we were just plugging along day-by-day, really losing money,” said Jerry Harcharik, a tester line inspector.

Local 2488 and Mitsubishi tried several ways to keep product in the plant, including negotiating a deal that landed production of the Outlander Sport. But sadly, it still wasn’t enough as the automaker continued to face struggles. On July 24, Mitsubishi announced the plant would end production.

I’ve been part of something more than just a job — It’s something bigger.

“I’ve put on my taxes for the last 26 times ‘autoworker’ and I’ve been part of something more than just a job — It’s something bigger,” production associate Kevin Brown said. “It’s something like trying to work for the elimination of two-tier wages, or increasing benefits, or even working for healthcare for more than just the few who can afford it. That’s something that’s important.”

Since the announcement of the plant closing, the community rallied behind the workers at the plant. A task force — made up of representatives from Mitsubishi and the UAW, community and business leaders, and other labor groups — is actively pursuing other manufacturers to take over the plant, giving hope that the closed plant won’t be closed for long.

President Williams said the UAW continues to play an active role in trying to find another employer for the facility. He credited the bargaining team at Local 2488 for doing an outstanding job in difficult circumstances.

“No one wants to hear that their plant is closing. It’s stressful to look at the future without that steady paycheck,” Williams said. “What I’m most proud of is the effort by the local membership, and the leadership by Region 4 Director Ron McInroy and Secretary- Treasurer Gary Casteel, that will help many of our members transition out of Mitsubishi with a lot more than they would have received if they were not union members. We will continue to actively look for other opportunities in Normal to bring jobs back to our members in central Illinois.”

Harcharik and Brown summed up the general feeling in the plant.

“In the end, I think it was important to be part of a union at times like these because we had no guarantees at all,” Brown said. “Having that union protection really gave us a little peace of mind and they worked very hard in negotiating our severance/early retirement package, which I think will really be helpful to all of us.”

“Thanks to a good, sound closing agreement and collective bargaining agreement that will see it through till the end of days here, we do have some more light at the end of the tunnel. “Harcharik added, “And that light isn’t an oncoming train, it’s an actual light.”

On Nov. 24, about 200 people from the community gathered with signs along the plant’s driveway at the end of the production day to show support and give thanks to the men and women as they drove away from plant. For most, it was the last day they work on the line at this plant.

Maggie Nichols, a resource development director for United Way of McLean County, was one of the supporters who arrived to show her support. “We are here to send a farewell to the UAW workers as well as the staff at Mitsubishi on what is the last day for most the employees out here and we just want them to know that we’re thinking about them and that, just because the plant is closing, we’re still here as a community for them.”

On a normal day, the workers would quickly leave the plant once their shifts were complete. On this day, they passed the parade of supporters much slower. They tried to soak it all in as they drove by filled with pride and smiles, some with tears, and some with camera phones documenting their emotional final exit.

“Anytime there was a charity, they were always the first to step up” said Mike Matejka, governmental affairs director of the Great Plains Laborers District Council, which organized the event. Matejka was pleased that so many people came out.

“I always remind people that they were the largest donors to Toys-for-Tots in the community, they started bone marrow drives in this community, their veterans committee was very active in going to the veterans’ home, so they were very visible.”

Supporters waved and cheered on the passing workers from multiple driveways which made production associate Ernesto Mata feel good as he exited the plant. “It shows that we are really were appreciated by the city and community. I especially liked that Arby’s on Market Street gave meals to us Mitsubishi workers on Friday if we could show our uniform or work ID. It was all really great to be appreciated because we always tried doing a fantastic job.”

Government officials and charity and community leaders were among the crowd. It was also filled with retired and former Mitsubishi workers, families, children and others who felt the importance of showing up and giving thanks just as they entered the Thanksgiving holiday.

“I couldn’t figure out why there was so much traffic as we were exiting the plant,” Greg Reed said, “and then I saw the crowds. It was bittersweet because you realized at that moment as you drove away that this is the end, but at the same time it made you feel good because so many came out to wave and say ‘Thank you’ for making world-class vehicles and being part of this community for the last 26-27 years. It just really felt good.”

The community in Normal, Illinois, came out in force to thank members of Local 2488 for all they’ve done in the community over the years.

“Mitsubishi is the second largest employer in the town of Normal, second to Illinois State University,” said Scott Preston, a Normal council member and co-chair of United Way of McLean County. “The partnership that they provide to this community, the value they bring and all the individual employees how they’re involved in our community — they’re living here, they’re doing things and they’re the reason we’re such a great community and we’re very, very thankful.”