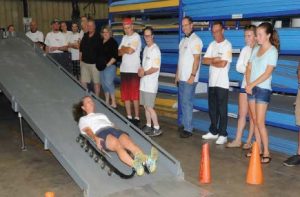 In August, the 65 UAW members at Hinkle Manufacturing Inc., a unit of Local 12 in Toledo, Ohio, received a visit from USA Luge-America’s Olympic Luge team. USA Luge stopped in Toledo on the way to events in Wisconsin as a “Thank You” for Hinkle’s long-term sponsorship. They expressed their appreciation by joining members at a catered luncheon and setting up a ramp in the factory so everyone could try out a luge. “It was such an honor and a privilege for us to try them out, said Unit Chairperson Cynthia Castilleja.

USA Luge Coach Fred Zimny said Hinkle Manufacturing has been a supporter and a sponsor for us for 15 years, supplying them with sled boxes to transport their equipment around the world. Hinkle donates all the containers as part of its contribution to the team. “Other Luge teams have asked us to make containers for them but Hinkle Manufacturing declined their requests,” said Castilleja. The durable lightweight boxes have become essential in USA luge’s ability to transport their equipment around the world safely and affordably. Company President Tab Hinkle said we are committed to helping the team. We found out how grateful they are for our contribution,” Hinkle added.

Zimny praised the quality boxes built by our UAW brothers and sisters. “We carry all of our equipment in those containers and ship them all around the world. These boxes have actually taken our sleds to four different Olympic Games and annual World Cup Competitions. They’re good, sturdy boxes. They’re the best.” Despite the celebration and praise, Castilleja described the occasion as a somber one. The day prior to the event, Hinkle Unit Chairperson Joan Adamson was in a fatal car accident. “Everyone was upset but we knew Joan would’ve wanted us to participate. She was always proud to be a UAW member and part of Hinkle.”

The Workers’ Voice was Heard — GOP Attack on Workers STOPPED!
Thanks to the efforts of many, the voice of labor was heard and the GOP lame-duck effort to drastically cut Unemployment Compensation was stopped. We should all take great pride in knowing that UAW members played a key role and lead the charge to stop this draconian legislation. A special thank you to all who wrote letters, called legislators, testified, lobbied, and filled hearing rooms at the State House. This effort was a true example of what we can accomplish with collective action. Once again, you have made our region proud. THANK YOU!
UAW Region 2B Report • Ken Lortz, director • Richard Rankin, assistant director • Regional office: 1691 Woodlands Drive, Maumee, Ohio 43537 • Phone (419) 893-4677 • Fax (419) 893-4073 • Tricia Geiger, editor
Share4
Tweet
Share
4 Shares
tags
hinkle manufacturing, local 12, Ohio, olympics, Region 2B, region 2b insert, toledo