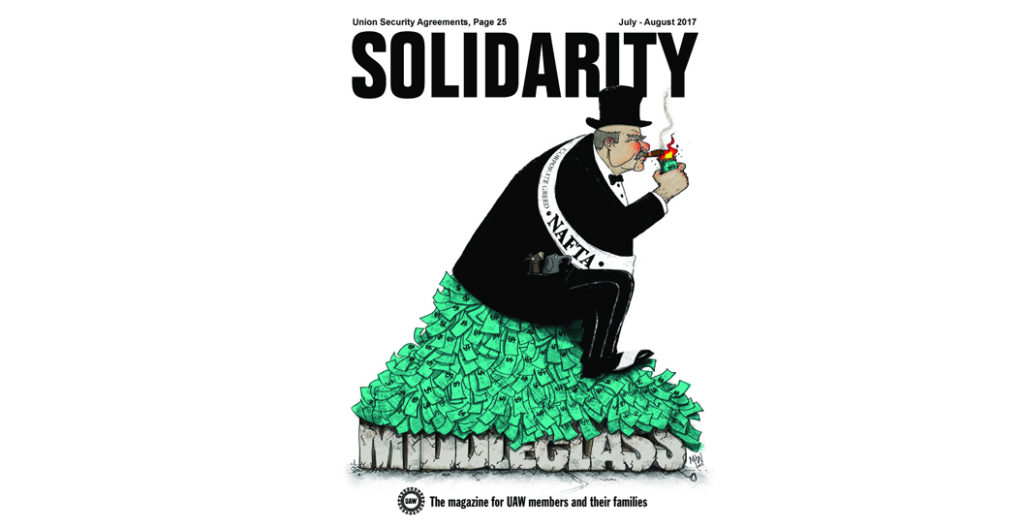 Let’s Have a Trade Agreement that Benefits Working Families 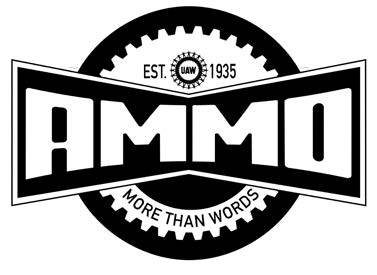 Independent presidential candidate Ross Perot in 1992 predicted there would be a “giant sucking sound” of jobs leaving the United States if the then-proposed North American Free Trade Agreement (NAFTA) was approved.

Perot, of course, correctly saw the future. That giant sucking sound was 851,700 U.S. jobs, particularly in manufacturing, draining mostly to Mexico, according to the Economic Policy Institute (EPI). Because of NAFTA, the U.S. lost 360,000 auto industry jobs, while Mexico gained 620,000 between 1999 and 2013, EPI says.

But it wasn’t just the lost jobs that NAFTA affected. The threat of moving to low-wage Mexico was enough to prevent workers in America from seeing real wage increases. Real wages for manufacturing workers fell by 4.4 percent from 2003 to 2013, according to a National Employment Law Project study issued in 2015.

A job in manufacturing once was a ticket to the middle class in this country. A job in a factory now means one often needs a second job just to make ends meet — forget about saving for retirement, sending your child to college or even a vacation.

NAFTA has failed working Americans and their families. It has failed the communities that rely on the taxes provided by manufacturing, particularly in the industrial Midwest. It has failed to lift Mexican workers out of poverty.

A trade agreement that hurts average Americans isn’t what NAFTA promised. Americans in the 2016 presidential election said they were tired of trade deals that only benefitted rich investors. Many voted for President Trump because he promised to kill NAFTA. Now President Trump says it will be renegotiated, but it is uncertain if what is accomplished will help working people.

We hope he keeps his promise and renegotiates NAFTA so the entire nation benefits. In the pages that follow, here are some ways NAFTA can be renegotiated to make it a fair deal for working Americans.

NAFTA Shouldn’t Put Our Auto Industry at a Disadvantage 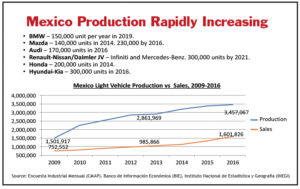 The U.S. trade deficit with Mexico in motor vehicles nearly doubled from $23.3 billion in 2010 to $46.2 billion in 2014, according to a 2016 study by the Center for Automotive Research. Simply put, the center of automobile vehicle and parts production has been moving south for quite some time thanks to NAFTA.

NAFTA has led to great imbalances in trade, especially in autos and auto parts. One way to bring trade back into balance is with quotas and tariffs. This would enable each country to manufacture goods but it would stop the flood of work that is currently flowing to Mexico in search of low wages and high profits. 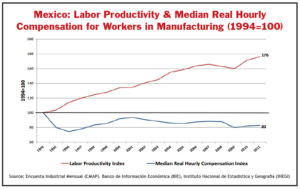 One way that NAFTA is unfair to U.S. autoworkers is in its Rules of Origin (ROO) policy.

Now, manufacturers can produce duty-free auto parts if their content contains 62.5 percent domestic content from NAFTA countries. Those renegotiating NAFTA need to close loopholes to not only where all materials are assembled, but examine where they originally came from. Non-NAFTA countries such as China use Mexico as a back door to get their products into the U.S. without paying duties. The products are minimally changed in Mexico to avoid paying a duty. A stronger ROO that requires a greater percentage of domestically produced content in a renegotiated NAFTA could penalize companies that abuse the rules. 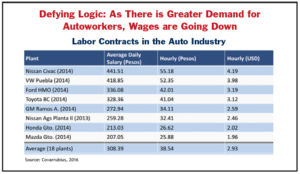 A stronger ROO clause protects workers in all three NAFTA nations from companies that would game the system.

Among the many problems with NAFTA is something called the Investor-State Dispute Settlement (ISDS) provisions. ISDS gives corporations and investors the right to sue governments that adopt laws and regulations that they claim affect their ability to make profits. ISDS sidesteps our country’s legal system and allows an ISDS tribunal to decide the case based on the rules of NAFTA. Moreover, these trader tribunals lack the transparency that is necessary in a functioning democracy. 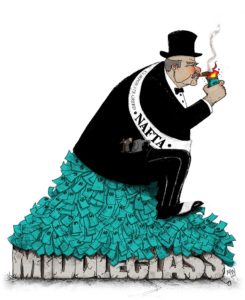 For example, it would be possible for a Mexican or Canadian corporation to sue a state or local government in the U.S. because the government entity implemented worker, consumer or environmental regulations designed to protect the public, but leads to the expected loss of future profits. In other words, if a company thinks it will make less money in the future, not lose money but just make less, the company can sue. Under NAFTA, a foreign manufacturer can bring a case before a NAFTA tribunal that challenges a local government’s Buy Local or Buy American ordinances or laws. That government body could potentially be on the hook for millions of lost profits to a foreign corporation.

According to a March 28 letter from the Acting U.S. Trade Representative to the House Ways and Means Committee, the Trump administration plans to “maintain and seek to improve procedures to resolve disputes between U.S. investors and the NAFTA countries through, among other things, mechanisms to deter the filing of and eliminate frivolous claims; procedures to ensure the efficient selection of arbitrators and the expeditious disposition of claims; and procedures to ensure transparency and public participation in dispute settlement proceedings.”

At this point, it’s not clear what specifically the administration will do to change ISDS, but clearly, foreign entities should not have greater rights than U.S. citizens, and those same entities should not be able to claim millions in damages from laws or regulations made by a democratically elected government body in this country. It’s time to end special rules for corporations and Wall St. and put workers in the driver’s seat.

NAFTA Was a Bad Deal for Mexico, Too

Here’s Why We Should Care

The United States and Canada have free and independent labor unions. While we know labor laws in this country are not strong enough, unions still have the power to represent workers effectively and change lives for the better.

In Mexico, the government has a policy of supporting corrupt, employer-dominated “protection unions,” sometimes also referred to as “yellow unions.” These are unions in name only as they merely exist to advance the cause of the employer. An estimated 90 percent of all union contracts in Mexico are protection contracts, according to the AFL-CIO report: “NAFTA at 20.” There is no democratic representation for workers, and most workers are usually completely unaware of the union’s existence. Contracts are negotiated in secret and there is no requirement that contract terms be disclosed to anyone.

Furthermore, the labor boards that certify local union elections are made up of officials from protection unions and companies. This makes getting recognition of an independent union extremely difficult. Mexico’s assembly factories, including where auto parts are manufactured for export, are notorious for low wages, long working hours, hazardous conditions and sexual harassment, according to the AFL-CIO.

The lack of bargaining power has real consequences for Mexican and U.S. workers. Despite NAFTA’s promise to raise Mexican workers’ standard of living, there were over 20 million more Mexicans below the poverty line in 2014 than in 1994 when NAFTA took effect. Instead of raising the Mexican standard of living, NAFTA has forced many Mexicans to look north for work, which opened them up to exploitation by unscrupulous U.S. employers.

Meanwhile, workers in the U.S. face the constant threat of their work being moved to low-wage Mexico, and have seen their wages and benefits compromised.

Any change to NAFTA must address the deficiencies in enforcement of fundamental labor rights and enhance worker access to complaint mechanisms so that when employers violate their rights, they have a vehicle to have their complaints heard and acted on. 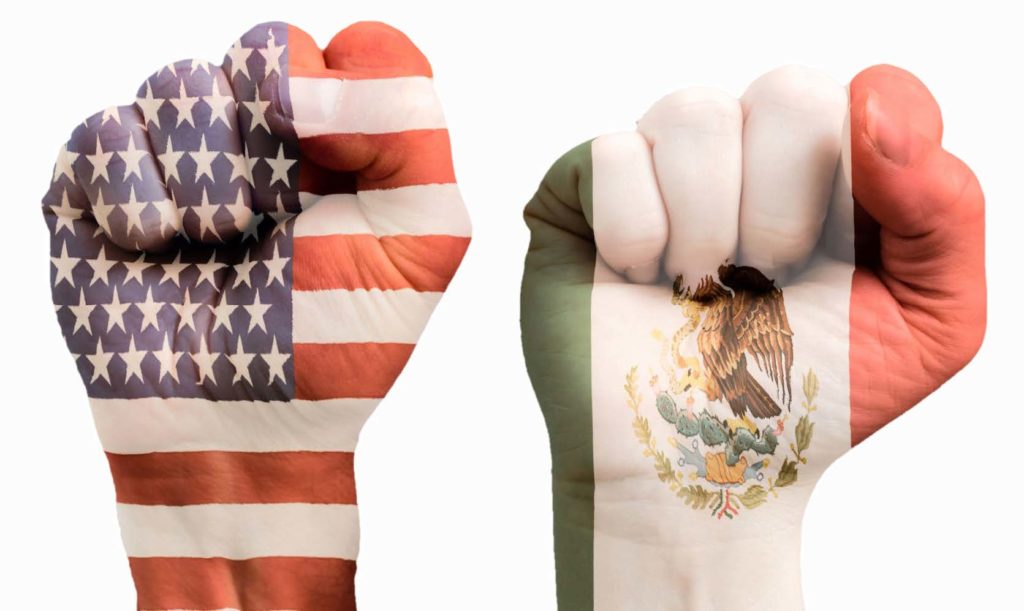 Enforcement of Rules is Critical

When NAFTA was first negotiated, labor and clean air and water standards were hastily slapped together as side agreements– unsuccessfully – to quiet labor unions and environmental groups. In the decades that have passed, they have made no real impact.

How do U.S. workers compete with Mexican workers who do not have a voice on the job, or whose employer does not have to follow even the most lax environmental or health and safety standards?

NAFTA’s deficiencies in these areas were intentional; it was not designed to ensure workers get a fair shake and work in a safe and healthy facility, or that the air we breathe and the water we drink are free of contaminants. The agreement was negotiated to only benefit corporate interests in the U.S., Canada and Mexico. And it has allowed employers in Mexico to dump their lower wage and environmental standards on the U.S. with goods produced at lower costs than if they were produced in the U.S. or Canada. This kind of “Social Dumping” must be stopped and must be addressed in NAFTA renegotiations.

Any new NAFTA must have enforceable international labor standards. Trade sanctions could be used to punish the countries that violate these standards in all three nations. Such provisions would help stop worker exploitation and environmental degradation, as well as stop the race to the bottom that NAFTA has created.

President Trump called NAFTA the “worst deal in history.” It’s time for the Trump Administration to take the bold steps that working families need to make this a good deal for them, too.

NAFTA cannot be fixed with a few tweaks or lip service to workers or environmental standards. And it cannot be fixed by applying the insufficient labor and environmental chapters in the TPP. It must be completely renegotiated to take into account the lives of ordinary working people and the planet.

A new agreement that works for all people in the U.S., Mexico and Canada can be worked out. But it will take our elected representatives, including those who rightfully opposed the current NAFTA agreement, to honor their commitment to making NAFTA a better deal by strengthening worker and environmental protections; ensuring that our government and citizens are not at a disadvantage to investors when it comes to instituting laws and regulations for the public good; making sure trade is indeed fair to all sides; allowing all workers the freedom to join an independent union if they choose to do so, and by guaranteeing that anything agreed to has the participation of the public and not only the corporate/investor community.

The UAW has never been against free trade. We simply demand that it be fair and balanced trade and to the benefit of everyone and not just a few influential interests.

It’s time to get this deal right. Contact your congressional representative and let them know that any new NAFTA has to benefit working Americans.

UAW President Rory L. Gamble Statement on the first 100 Days of the Biden Administration and Advances for Working Families