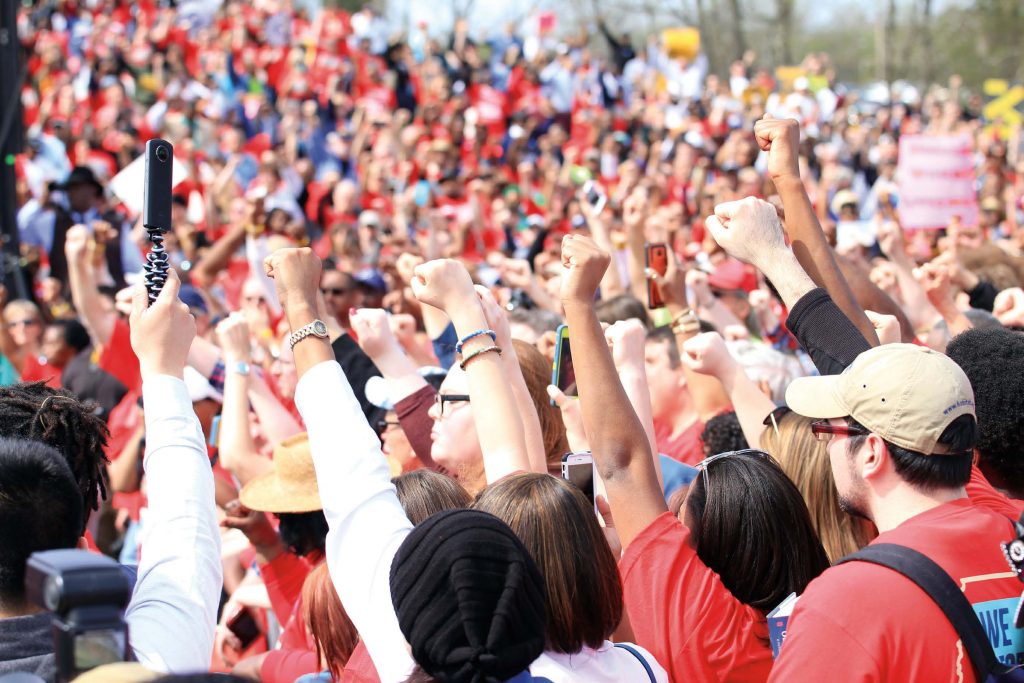 Echoes of an earlier time in Mississippi were unmistakable: Rights denied and rights to be fought for. An entity that would protect the rights of some people, but viciously oppose the rights of others. A coalescing of people of different races, ages, faiths, socio-economic status and other backgrounds coming together to fight for justice. Prominent individuals from across the nation and the world lending their name and influence to the cause.

But on March 4, when all was said and done at the March on Mississippi to support Nissan workers who want to vote on union representation without intimidation, the question to be answered remained:

The question this time isn’t posed to government officials protecting a system of racial segregation and denial of civil rights that has left a permanent stain on our nation’s soul. The question this time is posed to a global corporation that allows employees at every one of its facilities to unionize – except in the United States. In our country and particularly in this state, Nissan fights viciously to prevent its workers from exercising their civil right to join a union and better their lives.

Indeed, why Mississippi? What makes Mississippi workers so different that they are not granted the same civil rights as workers elsewhere? The workforce at the sprawling manufacturing facility 10 miles north of Jackson, Mississippi, is 80 percent African-American and is in a state that lags the nation in wages, education, health care and other standards of living. Nissan workers want to change that.

“I have two daughters and I want them to grow up in a community where they will have a real shot at a good future and a decent living,” said Morris Mock, who works on the paint line. “That’s why I’m going to keep fighting for good jobs at Nissan’s plant, no matter what it takes.”

Having a voice on the job, like their counterparts at manufacturing facilities in Brazil, France, South Africa, Spain, the United Kingdom and elsewhere, would give them power to try to improve wages, benefits, health and safety and other working conditions.

“We understand that we are better together,” UAW President Dennis Williams said as the crowd, easily in the thousands, basked in the sun of a Springlike day. “We know that the only path to have economic justice is through collective bargaining.”

Even though the criticism of Nissan’s anti-worker campaign in Canton was intense at times, Williams reminded the workers that this movement was about them, their families, their future and the ability to change what is in front of them.

“This isn’t about being anti-Nissan,” Williams said. “This is about a balance of power. It’s about the workers having a voice in the workplace.”

Having that voice heard could help improve issues like health and safety. A moment of silence was held for Derrick Whiting, a Nissan worker who died on the job in 2015. Whiting had complained of chest pains and went to the plant’s medical facility, but was sent back to the line and later collapsed. The company disputes that Whiting died on the job.

“I was there,” Parks said. “I saw him on the floor and they’re telling me I’m lying.

The U.S. Occupational Safety and Health Administration (OSHA) has issued multiple citations against Nissan for violations of federal health and safety laws. The most recent citations, issued in February, found that Nissan “did not furnish employment and a place of employment which was free from recognized hazards that were causing or likely to cause death or serious physical harm to employees.”

Another key issue for Nissan workers is the ability to transition from being a temporary worker without any idea of when they might become a permanent worker. Temps typically earn much less and have no control over when they are working, which disrupts family life. Wages and the lack of power they have to control work issues like their schedule is actually something the state uses as a selling point to manufacturers seeking to open plants. The state of Mississippi has given Nissan $1.33 billion in tax breaks since Nissan began operating in Canton in 2003.

“For so long, Mississippi has sold us as a cheap labor state,” said Derrick Johnson, president of the Mississippi state chapter of the NAACP. “We’re not going to take it anymore.”

Nissan versus the U.S. Government

The UAW aligns with the IndustriALL Global Union to seek assistance from the U.S. National Contact Point (NCP) for the Organisation for Economic Cooperation and Development (OECD) in responding to Nissan’s violations of workers’ organizing rights in Canton, Miss. The UAW and IndustriALL say the company is using “threats, intimidation and fear” to keep a union out of the plant, in violation of the OECD Guidelines for Multinational Enterprises. The request for assistance from the OECD, which promotes policies that improve the economic and social wellbeing of people around the world, follows years of good-faith efforts by Nissan workers and the UAW to reach an agreement with the company to allow a fair union election in Canton.

The U.S. NCP determines that the issues raised by the UAW and IndustriALL are “material and substantiated and merit further examination.” However, Nissan rejects the U.S. NCP’s offer to mediate the dispute, leading the NCP to say in a statement that it “regrets Nissan’s unwillingness to participate in the process.” Later, the UAW and IndustriALL make additional requests to OECD National Contact Points in Europe and Asia, where Nissan has active corporate and manufacturing operations and business alliances.

The NLRB files a complaint against Nissan and a contract worker agency for violating workers’ rights at the company’s Mississippi plant. The UAW, which has long alleged that Nissan is intimidating workers, made the charges leading to the NLRB complaint, which finds that Nissan managers “threatened employees with termination because of their union activities … interrogated employees about their union support … [and] threatened employees with plant closure if they choose the union as their representative.”

In a hearing before the French National Assembly, Carlos Ghosn, chairman and CEO of Nissan, Renault, and the Renault-Nissan Alliance, denies allegations that Nissan opposes employee representation in Mississippi, saying the company “has no tradition of not cooperating with unions.” The next day, in Brazil, union representatives deliver a letter to organizers of the Olympics in Rio de Janeiro stating that Nissan is violating Olympics sponsorship guidelines by undermining workers’ rights in Mississippi.

On the heels of Ghosn’s seemingly pro-labor comments to the French National Assembly, Nissan broadcasts a video inside the Mississippi plant in which a plant manager states: “We believe that it is not in the best interest of our employees, our customers, or our community to have the UAW here.”

A top official in the French National Assembly calls on the French government to weigh in on behalf of workers at Nissan’s Mississippi plant who want to have a union vote without management intimidation and threats. Christian Hutin, deputy chairman of the Social Affairs Commission and member of the National Assembly, says France should help Mississippi workers by using its leverage as a major shareholder in Nissan’s business partner, the car manufacturer Renault. With an approximately 20 percent stake in Renault, the French government is the largest shareholder in Renault, which in turn is the largest shareholder in Nissan.

A U.S. magistrate judge hands down a federal warrant against Nissan, allowing OSHA to inspect the Canton plant in order to determine whether the company is providing a workplace that is “free from recognized hazards that are causing or are likely to cause death or serious physical harm to its employees.” Nissan attempts to quash the warrant.

Based on new developments, including the NLRB complaint and repeated health and safety violations at Nissan’s Mississippi plant, the UAW and IndustriALL renew their request to the OECD — this time seeking assistance from National Contact Points (NCPs) in the Netherlands, where the Renault- Nissan Alliance is incorporated, as well as France and Japan, where the companies have active corporate and manufacturing operations.

OSHA issues citations finding that Nissan “did not furnish employment and a place of employment which was free from recognized hazards that were causing or likely to cause death or serious physical harm to employees” and that the company did not “provide adequate training to ensure that employees acquired the knowledge and skills required for the safe application, usage and removal of energy control devices.”

Senator Sanders told the crowd that 30 percent of the children in the United States are living in poverty. Less than half of all workers have saved money for retirement.

“This is America. This is the greatest country in the world and all of our people deserve decent wages and decent benefits,” Sanders said, adding that Nissan makes huge profits, pays its CEO handsomely and should “share some of that wealth.”

“The reasons we see opposition to unions here in Mississippi and in this country, are because unions work,” he said.

“The eyes of the country and the world are on you,” he told Nissan workers. “Don’t feel you are alone. You’ve got people all over this country — and many of my colleagues in the Senate are with you. We are with you in this struggle. Fight on and let’s win this battle!”

Many UAW members from across the country travelled to Mississippi to support their brothers and sisters at Nissan. Adam Underhill, president of Local 167 in Wyoming, Michigan, has worked at union and nonunion manufacturing plants and knows how a union can help workers. Before his job with General Motors at its engine components facility in Wyoming, he worked at a nonunion plant that made frame rails for fire trucks. Temperatures in the plants reached 110 degrees in the summer. There wasn’t a safety protocol for moving the heavy rails, putting him and his fellow workers in danger every day.

“That health and safety stuff is huge,” Underhill said before the rally. 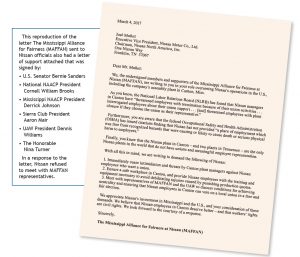 Robert Turner of Local 2131, who works at Inteva Products in Adrian, Michigan, brought his family down to help. His wife, Shauna, and four of his children were passing out t-shirts before the march.

“I’m here to support the Nissan workers at the Canton, Mississippi, plant because everyone should have a voice in the workplace and being in a union is to have a voice at the table,” Turner said.

Denise Floyd-Scott of Local 600 and Tyrone Scott of Local 900 spent 15 hours on a bus from Detroit to support the Nissan workers.

“We came here to let Mississippi know they have a right to fair wages and a safe work environment and a union will give that to them,” Floyd-Scott said as she marched from the rally site across Interstate 55 to the Canton plant. “We have to let them know we stand with them in the fight.”

The long procession across the interstate to the plant gate was held to deliver a letter (see below) to plant management that demanded Nissan managers stop the intimidation tactics and allow a fair vote on the representation question. The support the workers received from other unions, public officials, clergy, environmental and women’s groups and others has been exceptional.

President Williams reminded Nissan workers that outside support only counts for so much. The solidarity needed to win comes from within.

“We can only support you,” he said. “It is up to the Nissan workers to make it happen.”

Travis Parks spoke for many Nissan workers who want to vote without fear or intimidation from Nissan.

Happy New Year from the UAW!