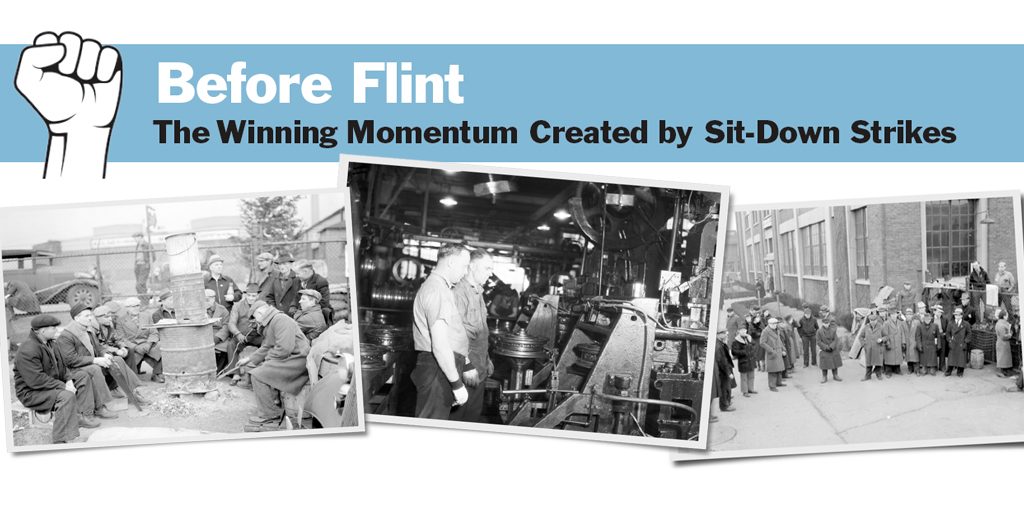 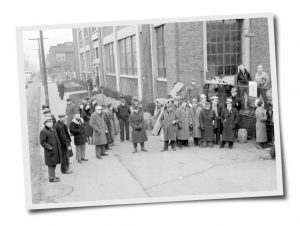 Editor’s Note: The following story was written by Jim Ward, a retiree of Local 78 in Detroit. A dedicated union activist as an active employee and as a retiree, Brother Ward passed away in October.

I’m going to take you back to 1935; I want the younger members of the UAW to know the benefits they receive didn’t come easy. On the streets of Detroit, a bedraggled army of unemployed men and women marched from plant gate to plant gate in desperate search for work. In a scene that would be repeated a half century later, grown men were standing on street corners holding handmade signs begging for work. Those lucky enough to have jobs were forced to work under conditions designed to break their spirit. Wages were very low and constantly falling lower.

In the fall a tool maker named Walter Reuther, who had been fired from Ford Motor Co. because management disliked his radical politics, returned to Detroit from a prolonged tour of Europe and Russia. Reuther and his younger brother Victor stepped into this labor tinder box with the express purpose of turning the tiny United Auto Workers union into a force that could not be ignored by the auto industry titans. 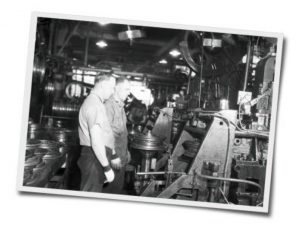 Realizing the strength in numbers, the Reuther brothers and other organizers urged the individual weak unions on Detroit’s west side to pool their resources. In September 1936, their organizing effort led to the formation of UAW Local 174. Walter Reuther, then all of 29 years old, became their first president. The small local was comprised of only 78 members.

Their first target was Kelsey-Hayes Wheel Company, which produced wheels and brake drums, mostly for Ford. Kelsey-Hayes was chosen for two reasons. It had a core of staunch union activists, and it had a relatively small work force — roughly 5,000 employees. The fledging local stood a better chance of organizing Kelsey-Hayes than the massive Ford Rouge Complex.

The organizers decided to concentrate on Department 49 at the McGraw Avenue Plant. Department 49 had the highest number of signed up unionists. It also housed the hub-and-brake drum section, a cauldron of worker discontent. The foreman enjoyed riding roughshod over poorly paid workers who were hired in at only 37.5 cents an hour. Women were paid only 22.5 cents an hour for the same job. The site was ripe for organizing.

Victor Reuther, Merlin Bishop and George Edwards (who later became a federal judge) secured jobs in Department 49. With union organizers in place, all they needed was an incident to spark a strike. They found it when they learned that a young woman fainted earlier in the year from the demands of a production line speed-up. As luck would have it, the woman was a union supporter and readily agreed to help.

With details nailed down, the organizers set the strike for Dec. 10, 1936. Since they planned a sit-in, they set up picket shifts and formed a committee to feed the strikers and their families. Aware that company spies infiltrated most union gatherings, the organizers kept the date and time of the protest a closely guarded secret. At the agreed-upon moment — 20 minutes before the end of the first shift — the young woman fainted. But this time, when she fell to the floor she launched the beginning of the UAW as we know it. In his book, “The Brothers Reuther,” Victor Reuther recalled what happened next: “I ran and pulled the main switch and shouted, ‘Strike! We’ve had enough of this speed-up!’ The call for strike action spread through our whole department and soon we had an enormous gathering around us.” 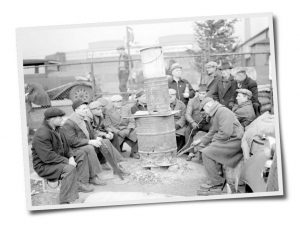 Upon seeing the determination of the workers, the plant manager cancelled the second shift and agreed to hold a formal negotiating session the next morning with union representatives from the plant on McGraw Avenue and the one on Military Boulevard. Jubilant over their success, the strikers went home to await new developments. That day alone Local 174 signed up hundreds of new members who were awed by the union’s ability to confront management. In typical form, the Kelsey-Hayes management team began to stall. For days, supervisors tried to cripple the organizing drive by bribing workers to support the company union rather than UAW Local 174.

On Monday, Dec. 30, 1936, the union called a general sit-down strike in both plants to protest Kelsey-Hayes’ refusal to bargain fairly. Some 500 men and women remained inside the plants while workers from across Detroit rallied outside and blocked the entrances. The picketers and protesters thwarted Kelsey-Hayes’ attempt to move the equipment out of the plant, and more than 1,000 workers rushed to join the bold little local. Whenever it was rumored that the company was readying an assault on the strikers, union brothers and sisters converged on the site to protect them.

Five days into the sit-down strike, Kelsey-Hayes slipped dozens of professional strikebreakers into the McGraw plant. Several thousand union members quickly surrounded the plant and began yelling, “Throw the scabs out!” Shortly after the angry chants filled the air the scabs left the building. The sit-down strikers also benefited from the refusal of local politicians and police agencies to evict them. Officials took the position that the protesters had entered the building legally as employees and had the right to remain there.

As the days wore on, Kelsey-Hayes came under increasing pressure from its major customer. Ford was running low on parts. Executives from both companies held an emergency meeting in Ford headquarters. Harry Bennett, the notorious hatchet man for Henry Ford, warned that if the strike was not settled, Ford would go elsewhere for supplies. That ultimatum forced Kelsey-Hayes to enter serious bargaining with Local 174.

On Christmas Eve, Local 174 reached a settlement. It called for an across-the-board wage of 75 cents an hour, a shop steward system, a shop committee elected by UAW members, and a seniority system that governed the order of future layoffs and recall. The union negotiators secured a 20 percent reduction in the speed of the production line.

The sit-down strikers marched to the cheers of thousands who gathered to congratulate them on their victory. Victor Reuther wrote, “Everyone sensed that a new era had begun for autoworkers. Within 10 short days Local 174 increased its members from 78 to 3,000.

After the Kelsey-Hayes Wheel triumph the phone at the west side local was ringing every hour of the day and night: Send us some soup and sandwiches; we’re sitting down on 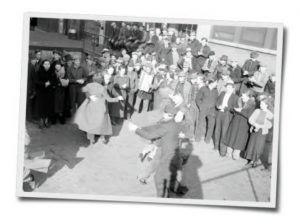 Hours after the settlement, Victor Reuther and Merlin Bishop left for Flint where they played key roles in the General Motors sit-down strike. The 44-day protest, which lasted from Dec. 30, 1936 to Feb. 11, 1937, thrust the UAW into the national spotlight. But it was the successful 10-day Kelsey-Hayes sit-down that helped pave the way for success in Flint.

Local 174 grew at a rapid pace. Sit-down fever spread through dozens of small plants and several large ones. By Christmas 1937, membership at the tiny local that dared to take on giants of industry stood at 35,000. It rightfully holds an honored place in the formation of the UAW.

Editor’s note: Prior to Brother Ward’s passing, he ended the piece by noting: “I have been trying for a couple years to get a historical marker on the site of the old Kelsey-Hayes Plant at McGraw and Livernois avenues in Detroit to honor the early sit-down strikers. I didn’t know how difficult it would be. I have contacted the president of the Detroit City Council, the Detroit Historical Society, a labor historian in Virginia and the list goes on. I will continue my efforts so that what those men and women did in 1936 is not buried in the rubble of Kelsey-Hayes as they tear it down.”

Sit-down strikes began gaining popularity in many industries by the mid-1930s.The first sit-down strike by a UAW local occurred in 1936 in South Bend, Indiana. Members of the Bendix-Stromberg Workers Federal Labor Union #18347 were battling with a company union, the Bendix Employees Association, for representation within the Bendix plant beginning in 1933.

The Bendix-Stromberg workers would affiliate with the UAW in 1935 and become UAW Local 9. UAW Local 9 represented workers at the Bendix Products Corporation of South Bend, Indiana. On Nov. 17, 1936, Bendix workers held the first UAW sit-down strike after the workers stayed in the plant for six days until agreements with the company were worked out. The company union was denied the right to bargain for employees and Local 9 became the single bargaining agent for Bendix workers.

Fast forward 80 years: Members of Local 9 continue in solidarity as employees of Honeywell Aerospace. Honeywell, which makes brakes and wheels for the military and commercial aviation markets, has locked them out of their jobs since May 9. Honeywell, which has put forth two substandard contract proposals that members have voted down, also locked out UAW Local 1508 in Green Island, New York. Scab replacement workers are doing their jobs during the lockout.