Community Service: It’s Who We Are 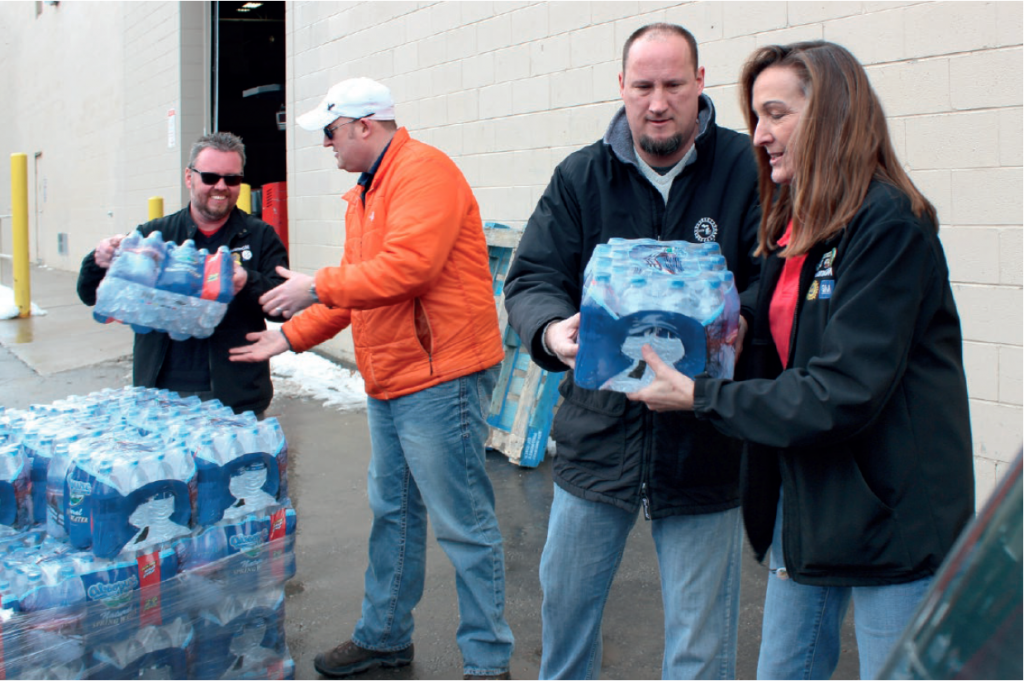 There’s something special about union people. If someone is in need, we respond. We don’t judge or make excuses not to do something: We act. What is it about trade unionists that makes this trait so ingrained, so instinctive? For starters, it’s why we organized in the first place. “An injury to one, is an injury to all” was an early labor slogan used in organizing to emphasize the point that we are stronger together. How then can we turn our back when someone in our community is in need?

During World War II, unions across the country began initiatives to organize relief projects in communities. The idea of community service was enshrined in our union through the Community Services Department which was established in 1951. Community Services is also one of the mandatory standing committees noted in Article 44 of the UAW Constitution.

But service happens not because our constitution mandates it, but because it is who we are. There are examples of this everywhere: countless locals raising funds to send water and supplies to Flint, Michigan; food donations for striking Kohler workers; school book bag drives for students in need in the fall. If UAW members see a need, we organize quickly to address it. Below are stories from two locals, but this is just a small sample of what UAW members are doing every day to build stronger communities and strengthen their union.

No project too small

Fort Wayne, Indiana, is home to big General Motors’ trucks and big UAW hearts. Local 2209 members work at GM’s Fort Wayne Assembly plant. “Local 2209 members come from all corners of the country. Some are far from their families. Despite that, we have a very strong sense of community here, and that drives a lot of our activism,” said President Brian Hartman.

“Our community services program is very organic. We do a lot of activities in partnership with the  area United Way, but we are also always keeping our ears open to find out what is going on and what our members are concerned with. There’s no shortage of work to be done, unfortunately. But we take on as much as we can in our local.”

That means that their Community Services Committee might be called on for disaster relief, building ramps, gate collections for people in need, or rallies, to name just a few. “It’s a broad array of projects, for sure,” said Hartman. “We recently heard about an elementary school that needed a new flagpole. It was a pretty simple project for us, but the impact on the students was huge. And that’s the point: Community service can change lives. And it goes both ways — we help others, but also gain so much back in return.”

Hartman gives an example: Community service gives the local the chance to engage with members about how their projects are connected to their strength at the bargaining table. “A rally to support Vera Bradley workers whose jobs are going to China is also about what could happen to us at Fort Wayne Assembly.

Injustices in our community need to be called out, or they become acceptable and are soon happening to all of us,” said Hartman. “Even the flagpole we donated to Roanoke Elementary School. One day one of those kids might think about organizing her worksite and have a positive memory of the UAW instead of what is shown in the media.”

Because the local has such a variety of projects, it put together a brief commercial which does the math on hours volunteered and dollars raised. “That commercial got a lot of positive attention. Members were proud when people would thank them at the neighborhood grocery store or gas station.”

‘We not only build cars and trucks, we build communities.’

Local 862 in Louisville, Kentucky, is made up of two large Ford Motor Co. assembly plants and multiple smaller units. “We’re very active in the community,” said Local 862 President Todd Dunn. “A key part of  our program is working with other groups. It’s a great opportunity to find common ground with organizations that might not know anything about labor,” said Dunn. “From that, we can build real, lasting relationships and strengthen their understanding of unions.”

In addition to participating in parades and putting together events and fundraisers, Local 862 has an unparalleled reputation for its building projects. It has built more than 300 ramps through its Wayne Vickers Memorial Wheelchair Ramp Project (named in memory of a co-worker). The local also takes on much larger building projects. It designed and built a “Mobility City” for Visually Impaired Preschool Services to simulate storefronts and buildings to help visually impaired pre-school children. “It gives children a safe environment to navigate streets and feel what  a fire hydrant or city parking meter looks like,” Dunn said. A course for a local high school’s robotics team is also on its list of accomplishments. And one of its latest projects was a memory garden for residents  of an assisted living center. “We talked with the therapists and asked what would help the residents stimulate their memories and from that we came up with ideas like a park bench with a stanchion to insert pictures such as a man with his dog. This helps trigger memories and make their lives more comfortable,” said Dunn.

The local has also built cabins and is soon starting a welcome center for Active Heroes Retreat Center, an organization dedicated to ending suicides among veterans.

Remember how Dunn said working with other groups can sometimes open minds about unions? “Just recently, I met a very wealthy philanthropist   who supports veterans. She wasn’t really familiar with unions and was probably quite conservative politically. I told her about all the work our local is doing with Active Heroes and how committed our union members are to community service. She said our conversation was an eye-opener and that she had no idea labor unions were so patriotic. She then opened her checkbook and wrote Active Heroes two huge checks.”

“For us, it was important that we get broad involvement in our Community Services Committee. We have co-chairs from our two big plants and we make a point of doing projects that touch every part of our community: the elderly, children, veterans, everyone,” said Dunn. “Honestly, we owe so much to those who have come before us. They’ve taught us about union values and compassion for others. Our hope is that the members of today see that in what we are doing in the community every day.”

Celebrating friends in our communities on National Friendship Day