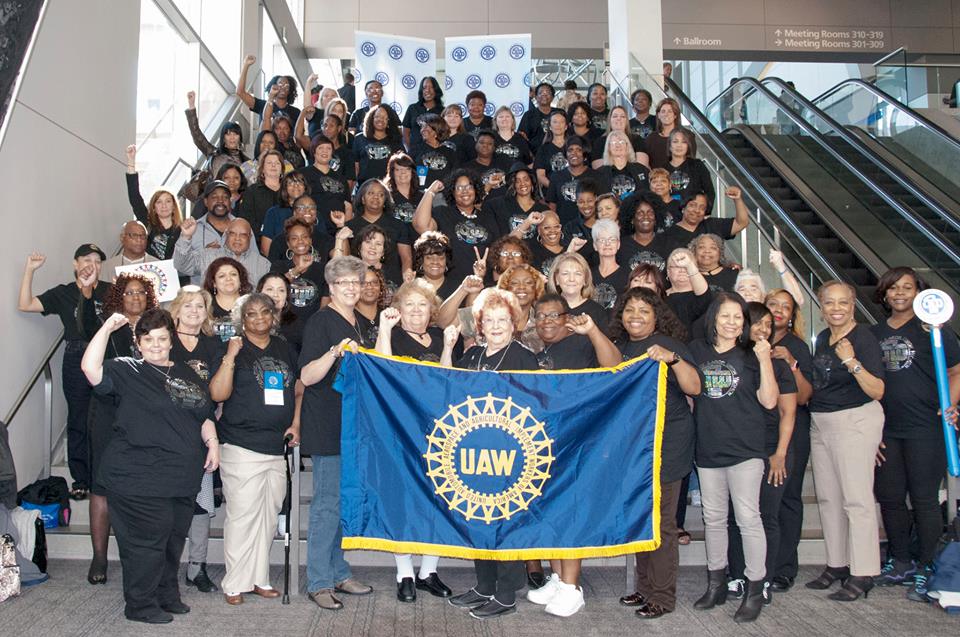 Unions fought for many of the benefits workers now have such as the 40-hour work week, overtime pay, and improved health and safety standards, which have improved the lives of all workers. It is only through a strong union and worker voice that these benefits will remain intact.

Worker’s wages have been stagnant and the rich have gotten richer. “A recent study showed the wealth gap is widening faster than anyone anticipated and that just 62 people own as much wealth as the poorest half of the entire world population — that’s 3.6 billion people,” said UAW Vice President Cindy Estrada, who directs the union’s Women’s Department. “This rising wealth disparity disproportionally affects women, leaves our children hungry, and keeps our elderly from living in the dignity they deserve.”

Union membership improves the lives of women and their families, both economically and by giving them a voice in their workplace. For example, a recent report on women in unions by the Institute for Women’s Policy Research (IWPR) shows that unions raise wages and improve benefits for workers at the middle and bottom of the wage scale at a workplace where workers are disproportionately women. In fact, women who are represented by a union earn an average of $217 more per week than women in nonunion jobs.

While wages are important, the advantages for union women go beyond higher wages. Union membership brings wages into the open and ensures that employers will pay workers based on the job they do. The wage transparency in a unionized workplace helps close the gender wage gap and prevents gender bias. Unions also typically provide women better access to benefits such as pensions and health care.

According to the IWPR report, 3 in 4 unionized women have some type of pension plan compared with 4 in  10 nonunion women, and are also more likely to get health benefits, paid sick days, and maternity or family leave. Additionally, through the collective bargaining process, unions are more likely to provide greater security from harassment, discrimination and arbitrary disciplinary actions.

Unions have been a major voice in the advancement of national policies that are important to women, like fighting for equal pay and fair work schedules, for equality in the workplace, women’s health concerns, and paid leave so they can take care of family issues, like a sick child. However, there is still plenty of work to be done in order for women to achieve equality in the workforce. While the gender wage gap of union members is lower than for nonunion workers, it does not disappear. There are still factors that contribute to the current wage gap such as discrimination, work defined as “women’s work,” and “family” work that typically falls to the women who are required to take time off to care for sick family members.

The U.S is the only developed nation in the world that doesn’t have a national policy requiring access to paid sick days and paid maternity leave. Women need affordable and quality child care, paid family and medical leave, and paid sick days. This lack of policy forces many women to choose between their economic security and their health. Policymakers and unions are addressing these challenges and advocating for national policies that will improve the lives of working women. Making it easier, not harder, for workers to form a union is a good start to this advocacy for women.

Women in the labor movement have a proud history of championing women’s rights through political action, fighting for racial equality and organizing the unorganized. Unions must strive to continue  that history by developing women to be strong union leaders and activists through effective mentoring programs, training on effective ways to mobilize women, and by encouraging more women to step into leadership and elected positions.