Ammo: Protecting Your Job – Weakening of Labor Rights Will Hurt All Americans 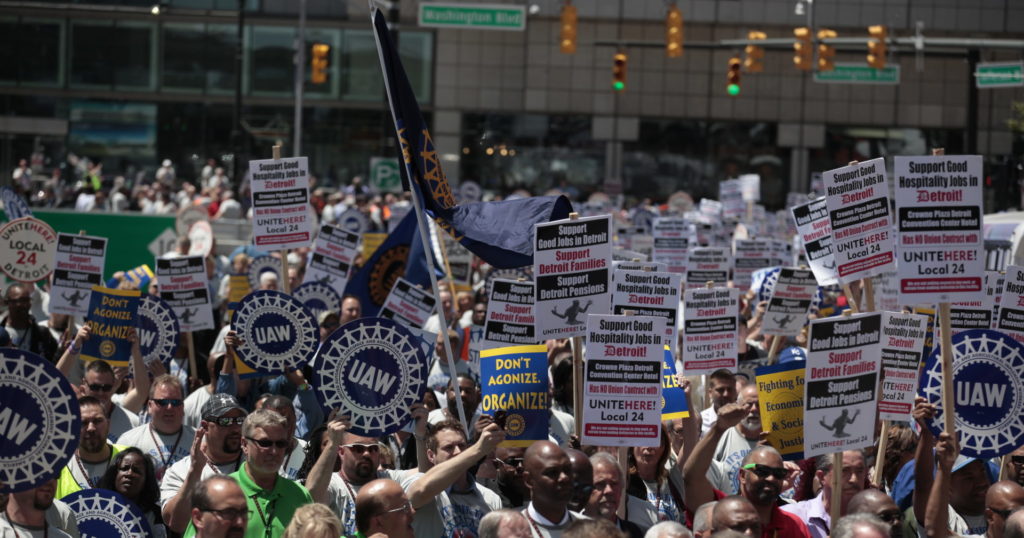 Your Tool to Discuss the Issue7s with Co-Workers, Family, Friends

There are many union members who say they love their union, but hate that it is “so involved in politics.” But there’s an old saying: “If you are not at the table, then you are likely on the menu.”

On the menu right now for Congressional Republicans is a long wish list of changes to laws and regulations that would curtail the ability of unions to organize new workers, bargain decent wages and benefits, and protect workers from hazards on the job.

We need to remain at the table because the ability to organize is critical to the survival of unions and their ability to build density to protect the economic and other gains that you have won in the past. More union density in an industry like auto means that you, through your union, are in a better position to protect those wages, benefits and working conditions. A lack of union density means that you will be competing more with nonunion labor, which undercuts our wages, benefits and health care. Just 7 percent of private sector workers are union members.

Organizing under a National Labor Relations Board (NLRB) with majority Democratic appointees is difficult, but when the board switches to a GOP-majority – the president gets to appoint NLRB nominees – it becomes much more difficult as conservative appointees usually side with corporate interests. Some fear that a GOP-led NLRB will be lax in enforcing laws when employers underpay their employees. For example, the Labor Department a year ago finalized rules that would allow overtime pay to workers earning up to $47,476, making an estimated 4 million lower-income people eligible. We strongly supported this long overdue raise and it was set to go into effect on Dec. 1, but a federal judge in Texas blocked the rule, and the Trump administration will not likely defend the Obama administration’s rules so it will probably languish in the courts. New Labor Secretary Alex Acosta was unsympathetic to the new rule in his confirmation hearings.

But it’s not only the NLRB that impacts labor rights and protections: The new administration and the Republican majority in Congress have already launched a major assault on regulatory protections, including a repeal of OSHA’s requirement that an employer keep accurate injury and illness records; repeal of a rule to require companies to disclose health and safety and labor violations to qualify for federal contracts; a delay in the effective date of OSHA’s new beryllium standard and a delay in the enforcement of OSHA’s silica standard in the construction industry. The AFL-CIO says the delay in the silica standard will allow continued high exposures that will lead to 160 worker deaths.

Senate Republicans confirmed Justice Neil Gorsuch to serve on the Supreme Court and he has a long history of ruling against workers in cases impacting wages and health and safety. Republicans hope to fill well over 100 openings in our courts. Judges have lifetime appointments.

There are also GOP budget proposals to slash the Department of Labor’s budget by 21 percent, eliminate worker safety and health training programs, eliminate the Chemical Safety Board and cut the job safety research budget by $100 million.

These changes set in motion by the Republican leadership have the potential to hurt you in the pocketbook and physically, and need our vigilance in Washington and elsewhere.