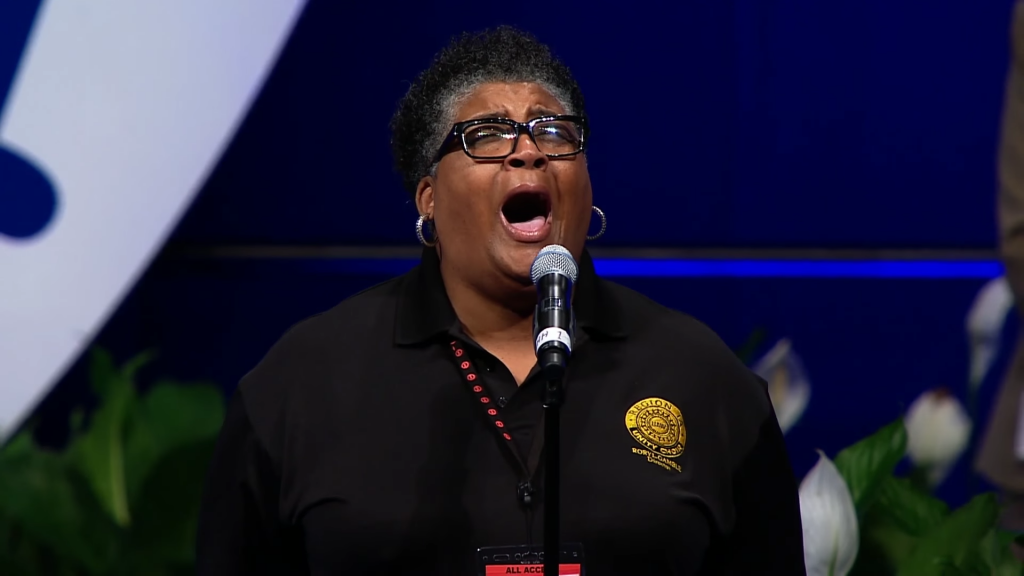 Angie Kelly may be one of the UAW’s most recognized members thanks to her performances in the UAW’s national anthem videos that have played for more than 15 years at countless UAW conventions, conferences at Black Lake and across the country at UAW regional and local events, but few of us know anything about her.

What we do know is that she can sing. Her perfect pitch and booming voice compel us to stop what we are doing and take notice of any song she may be singing. She is powerful, melodic and simply easy on the ears.

“I was raised in a church and all I knew was music because my mother was in the choir and I would sit in the pew during rehearsals and music just absorbed into my subconscious,” Kelly said.

“It is a blessing, because I love music and I always had great people around me as teachers when I began singing at 5 years old.”

What may surprise UAW members is that she is one herself.

Kelly is a third-generation UAW member and has worked for nearly 20 years at the Ford Motor Co.’s Rawsonville (Michigan) plant. She is a member of Local 889 and is a QOSC — Quality Operating Systems Coordinator.

Working for Ford runs deep with her as she works at the same plant that her father worked. Her grandfather was an International Representative for the UAW in the National Ford Department and her brother works for Ford in Dearborn.

“I remember a time growing up when my dad was on strike and it was a tough time for him. But even during that, the UAW always took care of us and I’ll never forget that. Through tough negotiations, the UAW saw us through and there were great rewards and that has happened time and time again. They have never failed us. It’s a strong organization that I’m proud to be a member of.”

In 2000, UAW-Ford posted an audition notice looking for national anthem singers and Kelly quickly got encouragement at the plant from her father and a co-worker who both believed in her talent. At the time, she had only sung with her church choir and, because she was shy, wasn’t sure she could step away from a group and sing solo.

She auditioned and to her surprise, was chosen to sing alongside her co-worker, Troy Coman.

“Being a part of those videos, representing the UAW is my proudest moment musically. I can never thank them enough for not only the opportunity, but the trust to sing for our membership.”

Just goes to show you that if you are a UAW member with a great voice, there is always a place for you to showcase your talent. Maybe it is singing at a nursing home or a special event in your community. Maybe you will be the spark for creating a local union choir. It is another way to show your talent to encourage other union members that they can use their voice for the union cause, and remind the community that our talents and diversity extend well beyond the work site doors.

Kelly’s second greatest moment was also one of her scariest. In 2014, she was asked to perform “The Star- Spangled Banner” for the UAW Constitutional Convention by herself without a choir and without music — acapella! Her performance was so beautiful that it gave the crowd goosebumps which earned her a standing ovation.

“Was I scared? Yes I was! Was I confident? No, I wasn’t! After a while, with much prayer and much encouragement from the UAW staff and my union brothers and sisters, I was able to do it,” she recalled. “I kind of came out of myself and I’m thankful.”

Kelly is also extremely proud of singing in both her church choir and the UAW Region 1A Choir.

Today, we celebrate the release of our new UAW national anthems featuring new vocal tracks sung exclusively by Kelly and produced again by Tim Kelly along with newly produced music videos featuring Kelly and members from all sectors of the union produced by UAW staff. These new versions will replace the old anthems played at UAW functions.

Next time you see one of the national anthem videos play at a UAW event, look around the room because Angie Kelly just might be in the crowd with you!