A disappointing turn of events 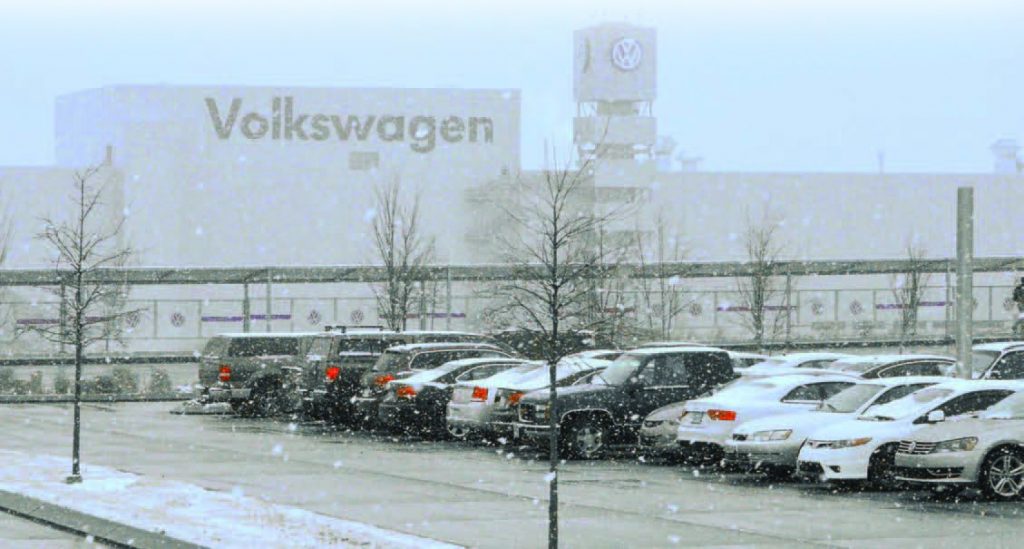 The National Labor Relations Board (NLRB) describes collective bargaining as an effort between an employer and employees to “bargain in good faith about wages, hours, vacation time, insurance, safety practices and other subjects.”

It’s really that simple: The democratically elected representatives of the workers sit down with company officials and in good faith they attempt to reach an agreement, one that hopefully benefits all parties.

Unfortunately, Volkswagen Group of America has refused to enter into collective bargaining with skilled- trades workers at its Chattanooga, Tennessee, facility who in early December voted overwhelmingly to join the UAW. Weeks later, the skilled-trades workers, members of UAW Local 42, had little choice but to ask the NLRB board to file unfair labor charges against the company for refusing to bargain with the union as required by federal law.

“The NLRB determined that Volkswagen’s skilled- trades employees constitute an appropriate collective bargaining unit, then supervised a fair election, and then promptly certified the results,” said UAW Secretary-Treasurer Gary Casteel, who directs the union’s Transnational Department. “Volkswagen’s skilled-trades employees voted overwhelmingly to designate UAW Local 42 as their representative for the purposes of entering into collective bargaining, which is a very common practice between employees and employers.

“Following this month’s election, we were hopeful that the company would accept the results and recommit to the principles of social responsibility that made Volkswagen a respected global brand. Instead, Volkswagen has refused to come to the bargaining table in violation of federal law,” Casteel said. “By refusing to engage in collective bargaining after a successful election, Volkswagen is not only doing a disservice to its employees but now is thumbing its nose at the federal government as well.”

Volkswagen originally planned to appeal the election, but backed away from that stance. But its refusal to bargain with its employees will not stop the momentum its workers have built to eventually have all production and skilled-trades workers under a UAW contract. The latest evidence of that momentum was seen during the two-day NRLB-supervised election. 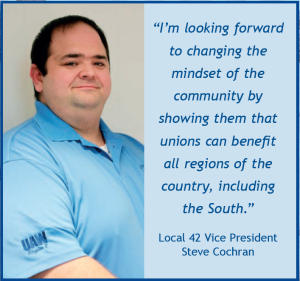 Local 42 members got to where they are today with courage and persistence. Workers are confident it will soon be a new day at work, where their rights on the job are respected and they can bargain as equals with management about issues such as wages, health and safety, and seniority.

Workers say they will continue to fight for a contract. “In our first contract, I want everyone treated fairly,” said Local 42 Vice President Steve Cochran. The 39-year-old father of two has been a skilled-trades member in assembly at Volkswagen Chattanooga since 2011. “Our new voice through union representation will take away the company’s power to treat employees differently without a fair process,” said Cochran. He’s been a union member in previous jobs and says he was relieved when this vote passed. He knows, through experience, the difference having a voice makes in improving things like seniority rules, training opportunities, wages and benefits. “We have good benefits here but I know the market is providing better benefits,” he said. Cochran said the vote sent a strong message  to the community. “I’m looking forward to changing the mindset of the community by showing them  that unions can benefit all regions of the country, including the South. Politicians in the South like to say to us ‘You’re lucky to have a job.’ That needs to change.

“Volkswagen employees have faced roadblocks along the way, including widespread political opposition. It didn’t deter them from getting where they are today,” Curry said. “Now, it’s time for the company to negotiate with Local 42.”

In 2014, the company agreed to recognize Local 42 as the representative of its members as the first step toward beginning collective bargaining. Casteel said Volkswagen should reconsider its refusal to negotiate. It’s illegal, but also goes against core company values. “Volkswagen’s decision goes against the company’s formula for success, which is combining environmental sustainability with effective employee representation,” said Casteel. “UAW Local 42 members have voted in good faith that the company will move forward with them. Volkswagen emphasizes co-determination. Workers are hoping the company will meet that obligation.”