2015 Financial Report: Report to Members on the Union’s Finances 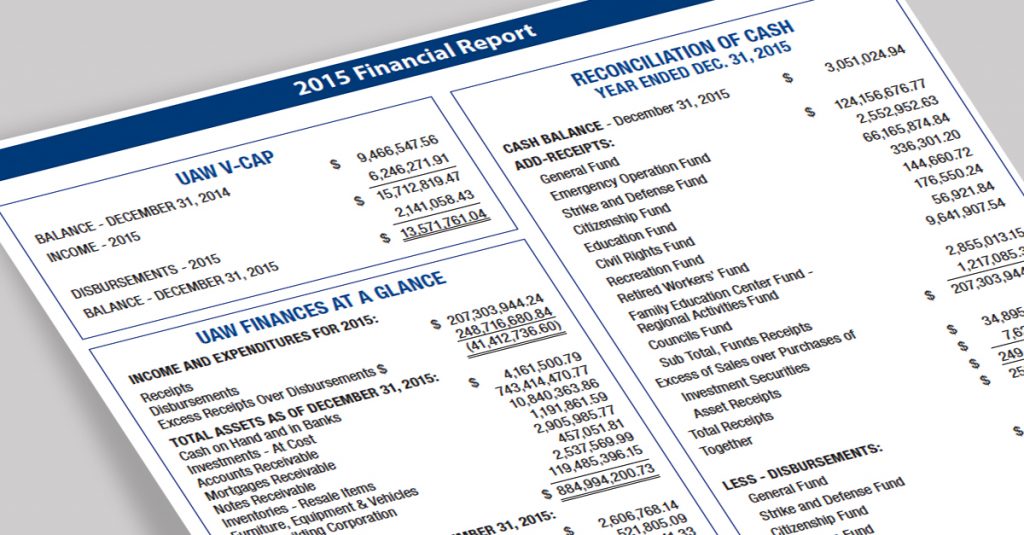 After a long, divisive 2016 election UAW members, rightfully so, are focused on how these next few years will impact their jobs, their families and their communities.

Let’s put the election behind us and now focus on how we will move forward in building a stronger union and protecting our American ideals. Now, more than ever, is the time for us to continue driving meaningful conversations about how to ensure decent-paying jobs, safe working conditions, affordable health care, secure retirements and protection from discrimination. We can, and we will, keep forging a path of economic prosperity for working families and our communities.

Eight decades ago, autoworkers were barely treated like human beings on the plant floor as line speeds, wages, benefits and safety were all determined by management’s whim. Autoworkers did not wait for the government to help them. Instead, they stood up for their rights by sitting down on the job. In time, these brave men and women won respect, decent working conditions and the chance at a middle-class life. It is that legacy we protect as we fend off attacks on issues like pensions, workplace health and safety protections, and even the right to bargain our wages and benefits.

Becoming organized is the only way Americans will ever have a fair shot at reaching the American Dream. Millions of workers realize this, from autoworkers and members of Local 42 in Chattanooga, Tennessee, who demand that Volkswagen respect their rights and immediately begin collective bargaining with the union as it promised in writing, to academic workers at Columbia University, who recently won a tough representation election and now demand that the university sit down and bargain a first contract.

Certainly, the 2016 election could lead to obstacles toward reaching our goals. But we know from our history that obstacles can always be overcome through hard work, organization, tenacity and the realization that relying on public officials for justice in the workplace only goes so far, even with officials who have workers’ best interests at heart.

To win economic and social justice in our workplaces and in our communities we must be the ones who drive the change. That’s how you are the “U” in union.

This financial report provides information about the union’s financial position. Among the highlights:

The following is a summary from UAW Secretary-Treasurer Gary Casteel. The full report is available for examination at all local unions.

The International Union’s financial structure is based on a system of individual funds. The UAW Constitution establishes this system and sets forth the source of income and objectives of each fund. The Secretary- Treasurer’s office ensures compliance with the Constitution by segregating all of the Union’s financial resources into separate funds and otherwise ensuring that expenditures are made in accordance with the Constitution. The Union has a total of 11 separate funds. The combined resources of these 11 funds are set forth in the figures below.

A summary of several of the Union’s larger funds is also included in this report. 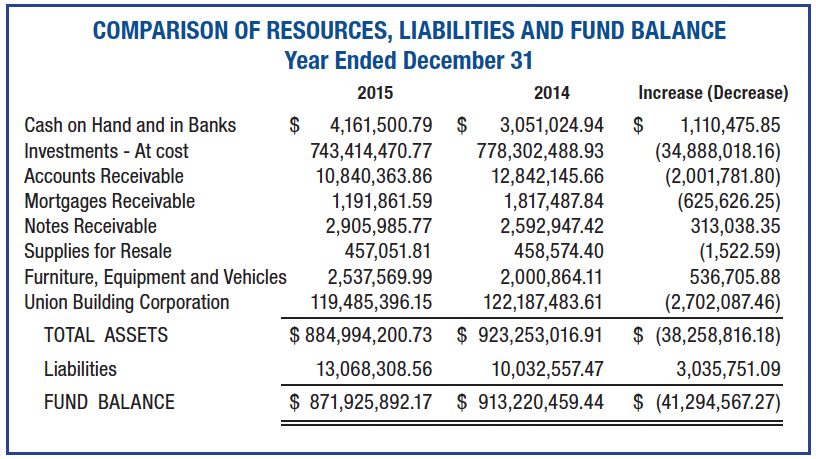 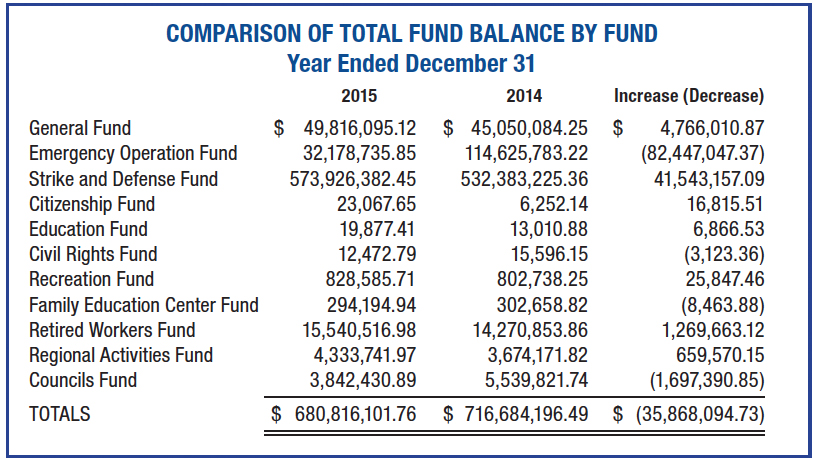 General Fund Assets, which include portions of Cash, Investments, Accounts Receivable, Mortgage and Notes Receivable, Inventories for Resale, Furniture, Equipment, Vehicles, and the Union Building Corporation, totaled $187,314,861.32 as of December 31, 2015.

The remaining balance of the General Fund, $132,408,209.09 represents the cost of assets that cannot be readily converted to cash such as real and personal property, inventory and mortgages due from local unions.

The Union Building Corporation is the holding corporation for all properties owned by the International Union, UAW. During 2015, $300,447.95 was spent on the acquisition, development and capital improvement of UAW-owned properties. In addition, property valued at $58,000.00 was transferred to UBC from closed local unions. UBC disposed of property with a book value of $3,213,334.24 during 2015.

REALLOCATION OF PER CAPITA DUES 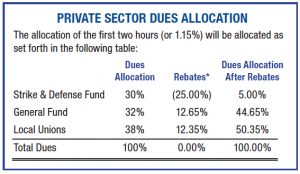 Of the total dues that Local Unions collect each month from members, a portion is remitted to the International Secretary- Treasurer. The dues collected will be allocated between the Local Union and the International Union UAW General Fund and the Strike and Defense Fund as follows:

The remaining one half (.05) hour of dues  income (or .29%) shall be allocated entirely to the International Union-UAW Strike and Defense Fund.

Public sector members generally do not have the right to strike. The allocation of the first two hours (or .832%) will be allocated 45.7% to the International Union, UAW General Fund and 53.3% to the Local Union.

The remaining one half (.05) hour of dues income (or .263%) shall be allocated entirely  to the International Union UAW Strike and Defense Fund.

A portion of each member’s monthly dues allocated to the General Fund is distributed among several other activities/funds on a monthly basis. Each amount is expended only for the designated programs or activities. The allocation is as follows:

In addition, both the Local Unions and the General Fund are eligible for an additional rebate from the Strike and Defense Fund referred to as the “13th check”. 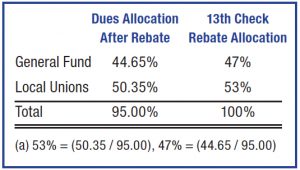 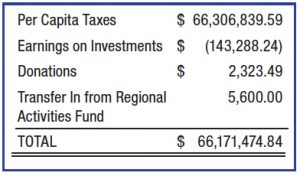 Expenditures of the Strike and Defense Fund for 2015 amounted to $23,768,499.19. A breakdown of these expenditures by Region is contained in this report. During 2015, strike assistance was provided to 3,310 members of our Union.

The following is a comparison of the Strike and Defense Fund Net Resources as of December 31, 2015 and the preceding year-end.

By actions of the 33rd Constitutional Convention in June 2002, the Emergency Operations Fund was established. The assets of the Emergency Operations Fund, including accrued interest and earnings on investments, shall be available to finance operations of the International Union in the event Operating Fund resources are insufficient to sustain operations due to the effects of a protracted or expensive strike, a series of strikes, or other events posing a serious threat to the economic viability of the International Union.

The International Union, UAW, through action taken at the 36th Constitutional Convention in June 2014, has been authorized to transfer eighty-five million dollars ($85 million) from the Emergency Operations Fund to the New VEBA Trust. The transfer was made on December 17, 2015.

Effective January 1, 2003, the UAW established Union Building Education, Inc. (UBE), a 100 percent-owned subsidiary corporation of the International Union, UAW, for the purpose of operating the Family Education Center in Black Lake. UBE collects income and pays expenses associated with the programs at Black Lake. The International Executive Board is authorized to transfer money from the General Fund, as necessary, to help supplement the cost of education activities at the Family Education Center.

In summary, the UAW’s financial condition remains strong. We continue to make difficult financial decisions in response to the challenges presented during these extremely difficult times for our members and the organization.

I wish to thank my fellow Officers, Board Members, Staff Members and Office Employees for their cooperation and commitment to the financial stewardship of this great union. 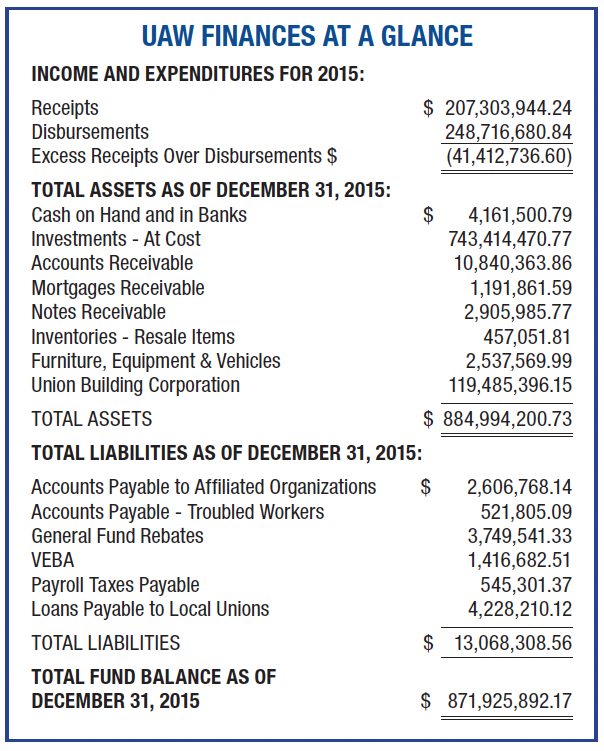 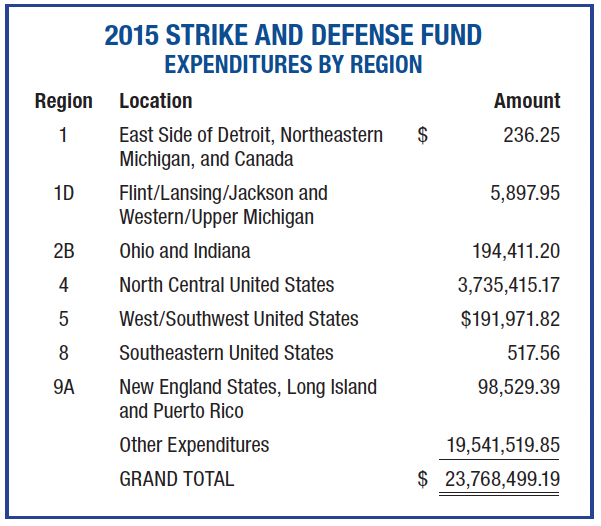 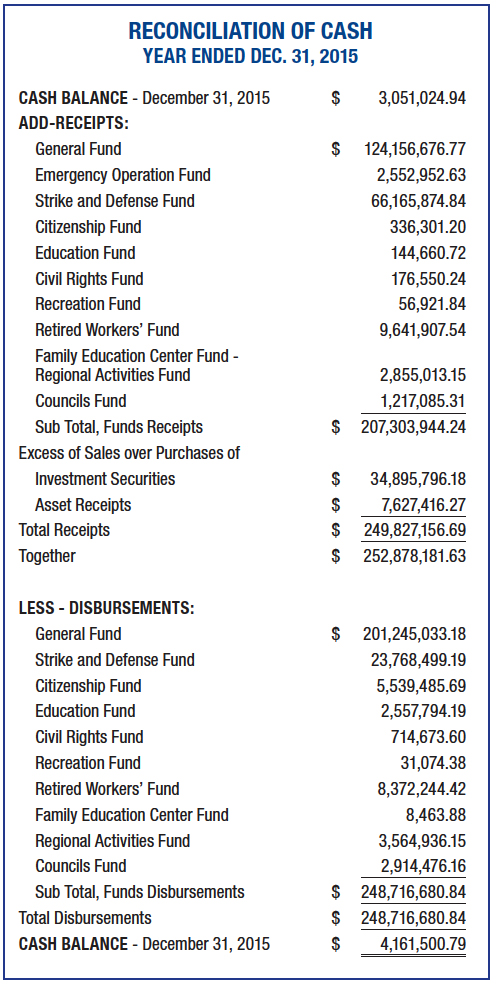 U.A.W. Board of Trustees:

Management’s Responsibility for the Financial Statements

Our responsibility is to express an opinion on these financial statements based on our audit. We conducted our audit in accordance with auditing standards generally accepted in the United States of America. Those standards require that we plan and perform the audit to obtain reasonable assurance about whether the financial statements are free of material misstatement.

An audit involves performing procedures to obtain audit evidence about the amounts and disclosures in the financial statements. The procedures selected depend on the auditors’ judgment, including the assessment of the risks of material misstatement of the financial statements, whether due to fraud or error. In making those risk assessments, the auditor considers internal control relevant to the entity’s preparation and fair presentation of the financial statements in order to design audit procedures that are appropriate in the circumstances, but not for the purpose of expressing an opinion on the effectiveness of the entity’s internal control. Accordingly, we express no such opinion. An audit also includes evaluating the appropriateness of accounting policies used and the reasonableness of significant accounting estimates made by management, as well as evaluating the overall financial statement presentation.

We believe that the audit evidence we have obtained is sufficient and appropriate to provide a basis for our audit opinion.

In our opinion, except for the effects of the matter discussed in the following paragraph, the financial statements referred to above present fairly, in all material respects, the assets, liabilities and fund balances of the International Union, United Automobile, Aerospace & Agricultural Implement Workers of America-U.A.W. as of December 31, 2015, and its cash receipts, disbursements and the changes in fund balances for the six months ended June 30, 2015, six months ended December 31, 2015, and the year ended December 31, 2015 in accordance with the modified cash basis of accounting.

All property held in the Union Building Corporation is stated at cost and most have not been depreciated. In our opinion, these properties should be depreciated over their useful lives to conform with U.S. generally accepted accounting principles. The effects of this departure from U.S. generally accepted accounting principles on the accompanying financial statements are not reasonably determined.

The Organization prepares its financial statements on the modified cash basis of accounting, which is a basis of accounting other than accounting principles generally accepted in the United States of America. Consequently, some revenues and the related assets are recognized when received, rather than when earned, and some expenditures and liabilities are recognized when paid, rather than when the obligation is incurred. Our opinion is not modified with respect to that matter.

STATEMENT OF ASSETS, LIABILITIES AND FUND BALANCES AS OF DECEMBER 31, 2015 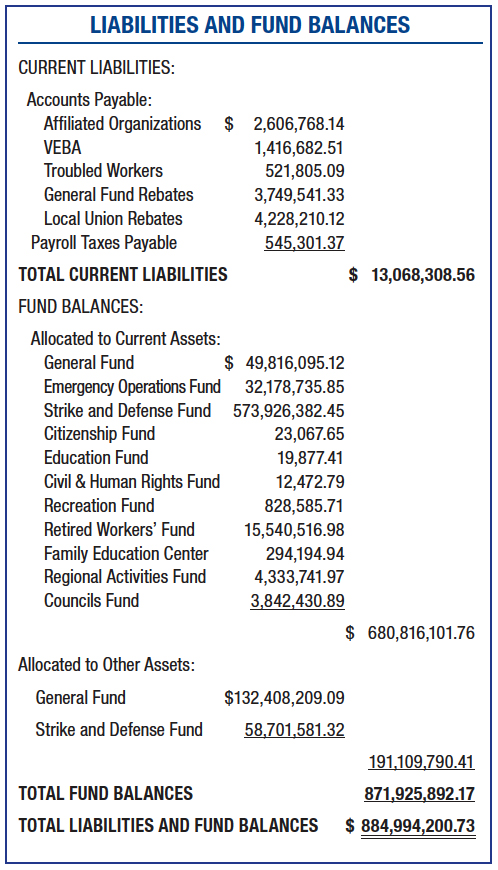 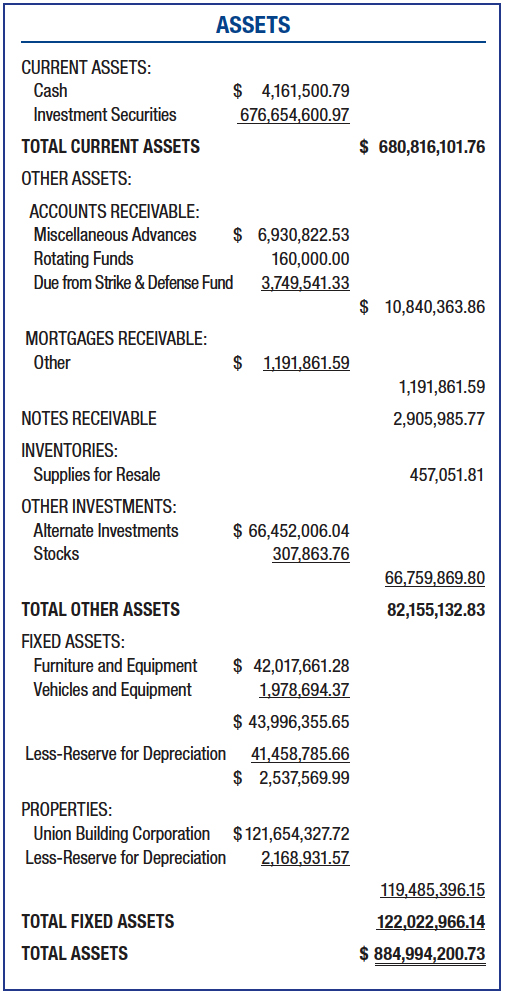 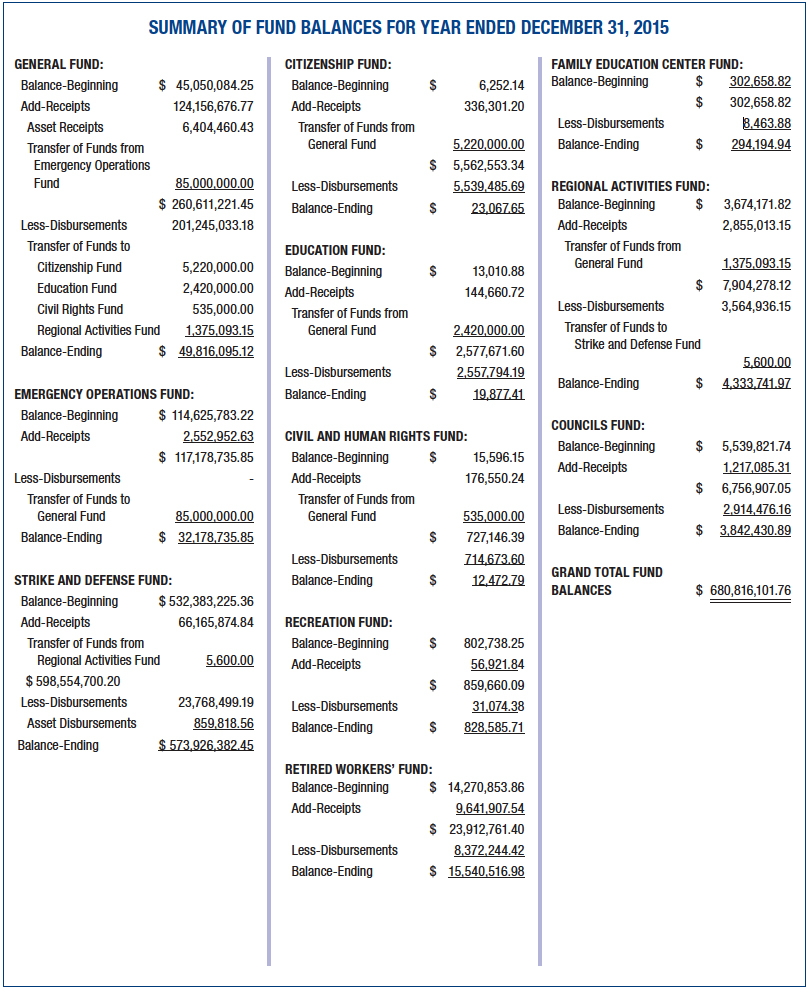