Sign the petition to honor Walter Reuther with a commemorative stamp 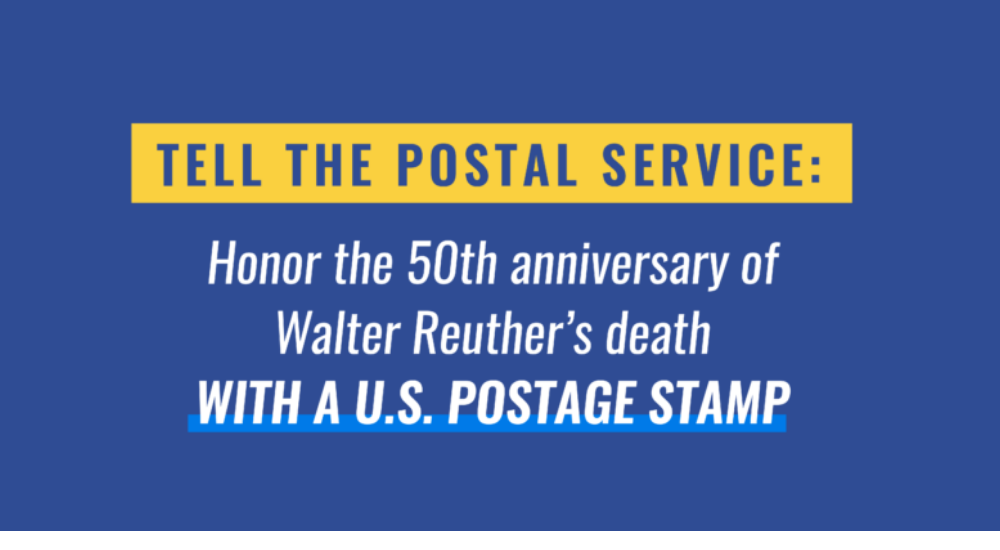 Walter Reuther can be said to have done more for more American workers than any other leader in the labor movement. He spent his life ensuring American workers have a voice at the table with management, a voice still exercised today by workers in contract negotiations that will affect millions of working families.

He was president of the United Automobile Workers (UAW) from 1946 to 1970. Born into a West Virginia union family in 1907, he learned at an early age the importance of unions, social justice and political action.

He and his brother Victor joined the auto industry when they moved to Detroit for work in 1927. It was there they had their first up-close view of how auto workers were abused in plants run without worker input. During the Great Depression, when many Americans were exploring alternatives to capitalism, Walter was fired for campaigning for a Socialist Party presidential candidate. Shortly after the firing, he traveled to the Soviet Union with his brother to work and to train Russians at the Gorky auto factory, equipped by Henry Ford. He returned to Detroit in 1935 and quickly established the rise of the UAW by forming Westside Local 174. Shortly after, he was elected to the UAW’s executive board.

The UAW saw major victories with the Flint Sit-Down strike in 1937 and other strikes that led to national recognition of the UAW by the Big 3 automakers. The victories were hard-won, however, and included Walter and his associates being beaten by Ford Motor Company thugs for organizing at the infamous Battle of the Overpass on May 26, 1937, and assassination attempts on Walter and his brother, Victor.

Walter and UAW members would go on to play a role in the Allied victory in World War II thanks to Reuther’s creative plan to retool auto factories to produce 500 Allied planes a day, a cornerstone of the Arsenal of Democracy that won the war.

After the war, the battles for fairness for workers continued with Walter at the helm as president who pledged to create a labor movement that fights “for the welfare of the public at large.” Over the next 10 years, the UAW, under his leadership, would gain historic benefits for workers through collective bargaining and create the strongest middle class ever seen in America.

He served as president of the CIO (Congress of Industrial Organizations) in the 1950s but as UAW president, his national stature became a driving force behind labor’s social justice advocacy.

“You’ve got to make up your mind whether you’re willing to accept things as they are, or whether you’re willing to try to change them,” he famously said.  He worked with government leaders and Dr. Martin Luther King on the passage of civil rights legislation, helped develop the War on Poverty initiative, marched with social justice and civil rights activists across the country, oversaw the UAW’s financing of the 1963 freedom marches, spoke before millions at the 1963 Washington, D.C., march and worked with the Johnson administration on getting assistance to troubled cities.

In the 1960s, he also advocated for aligning with international trade unions and began his dream of establishing a retreat center for worker education about workers’ rights and social justice. His beloved UAW Walter and May Reuther Family Education Center in northern Michigan still operates to achieve that goal but, sadly, Walter and his wife, May, were never able to fully enjoy the center after their plane crashed en route to the center on May 9, 1970.

Walter Reuther’s legacy lives on today with all workers who are still without a voice at the table with management, with those who believe in the rights of working families, and with supporters of social and economic justice.

Thanks to everyone who has signed! The petition deadline was Aug. 6 at 11:59 p.m.