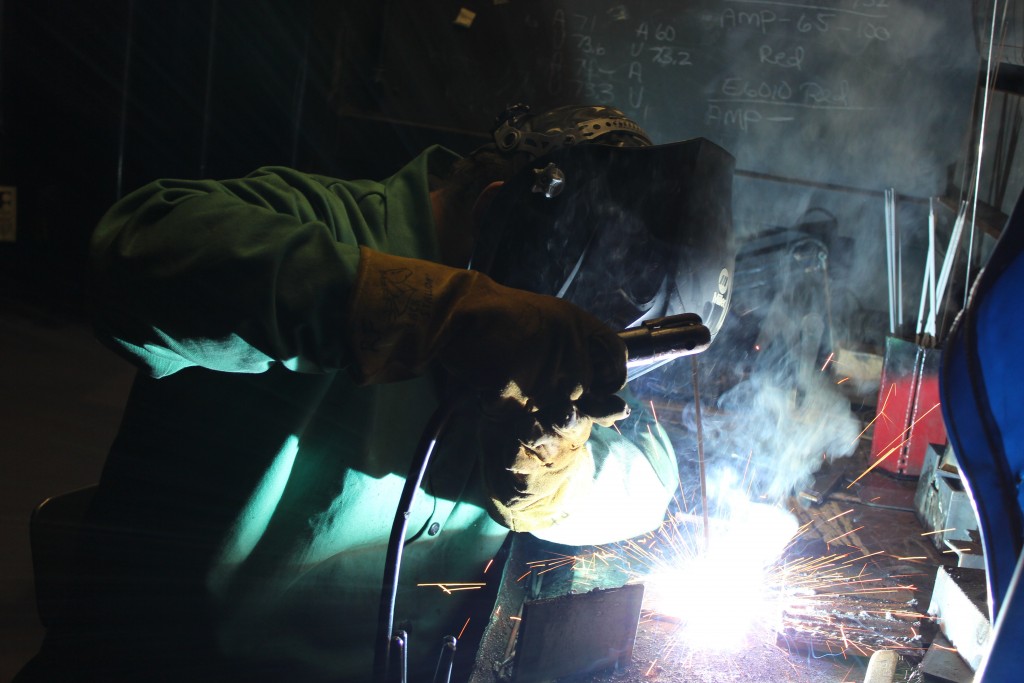 Some are homeless. Others are missing limbs or facing other serious issues as a result of their service in war-torn places such as Afghanistan and Iraq. But all of the participants in the UAW-Ford Veterans Welding Class have the same desire to improve their lives by learning a trade.

The 10 veterans taking the six-week course at the Ford Technical Training Center in Lincoln Park, Michigan, are grateful for the opportunity the free course jointly operated by the UAW and Ford presents.

“They’ve given me the opportunity to better my skills, and I’m not going to pass that up,” said Darryl Soulet, a homeless Navy veteran from Detroit. “I was lucky to get in this class at the last minute. I am very grateful for this. This will strengthen my resume even more.”

The course is taught by retired UAW-Ford skilled trades members who are eager to teach the next generation what they have learned in decades of work in Ford plants. Being able to pass that knowledge on to veterans in need makes their work in “retirement” much more meaningful, said Paul Peer, a retired UAW tool-and-die welder from Ford’s Rawsonville, Michigan, plant and a member of Local 898.

They’ve given me the opportunity to better my skills, and I’m not going to pass that up.

“They could have been killed. They made a sacrifice, and it’s kind of like paying it back,” said Peer, a U.S. Air Force veteran.

Indeed, the veterans who have taken the welding class know sacrifice. Peer and his fellow retired UAW skilled trades members have trained veterans who live in homeless shelters, such as Soulet. They’ve also trained veterans with serious injuries, such as Derek Holman of Las Vegas. While serving in the Marines in Iraq and Afghanistan, Holman had shrapnel from a 107 mm rocket pierce his carotid artery and was also injured by an Improvised Explosive Device (IED).

Holman plans to use the welding skills he’s learned to go into business for himself. And he believes he’s found the perfect place: Wearing full welding gear and working when the temperature in Las Vegas gets above 100 degrees isn’t for everyone.

“No one really wants to do it,” he said.

The course accepts veterans from all over the country. The course and lodging are paid for by the Veterans Administration. Ford and the UAW provide breakfast and lunch, as well as the expertise. The veterans are taught various welding methods such as Shielded Metal Arc Welding (commonly known as “stick”); Gas Metal Arc Welding (MIG); Gas Tungsten Arc Welding (TIG); Oxy-acetylene welding cutting and brazing; plasma cutting; and brazing and soldering. They learn about various joints such as lap, butt, corner, edge and tee, and also learn how to weld in six positions.

The goal of the program isn’t to turn these veterans into instant journeypersons. Rather, the goal is to get them a foot in the door at companies looking for those with welding skills. Upon passing a test at the end of the course, course participants are certified by the American Welding Society. Some have been hired by Ford into the production ranks with an eye toward becoming an apprentice someday.

“Some of them do exceptionally well,” said Local 898’s Richard Oster, who retired from Rawsonville with more than 42 years seniority. “All of them take away something.”

Oster recalled that one veteran, despite being the hardest worker in his class, had tremors so bad that he couldn’t pass the certification test. But that wasn’t his goal.

Both instructors said veterans benefit from the discipline they learned in the military. Not only do the veterans need to closely follow the journeyperson’s instructions on techniques, they also need to understand the serious safety issues when working with dangerous gases and hot welding equipment.

“They are well disciplined. They listen. They pay attention,” Oster said. “Give them a goal to achieve and that’s what they work for.”

Gerald Towns, a Marine Corps veteran, is currently homeless but has a goal: Use this program to eventually land a job at Ford.

“I’m taking advantage of this opportunity,” Towns said during a break. “I want to make the most of it.”

He and other veterans credited the instructors with helping him to move closer to his ultimate goal.

“I’ve learned a lot from these guys,” Towns, a Detroit native, said. “They’re very particular, very informative and always willing to help you.”

“They’re great. They’ll take the time,” Holman added. ‘They’ve got patience. That’s a pretty big one with us.”

UAW Vice President Jimmy Settles, who directs the union’s National Ford Department, praised both the veterans and their instructors for making a difference in our country and in our community.

“There is no better way to say ‘Thank You’ to our veterans than by training them for a job that can provide them with a decent standard of living. They are due that and so much more,” Settles said. “Our UAW instructors aren’t really ‘retired.’ They’ve simply moved on to different work. And the work they do in training our veterans is a credit to them and to our union.”

Remembering and Honoring our Veterans