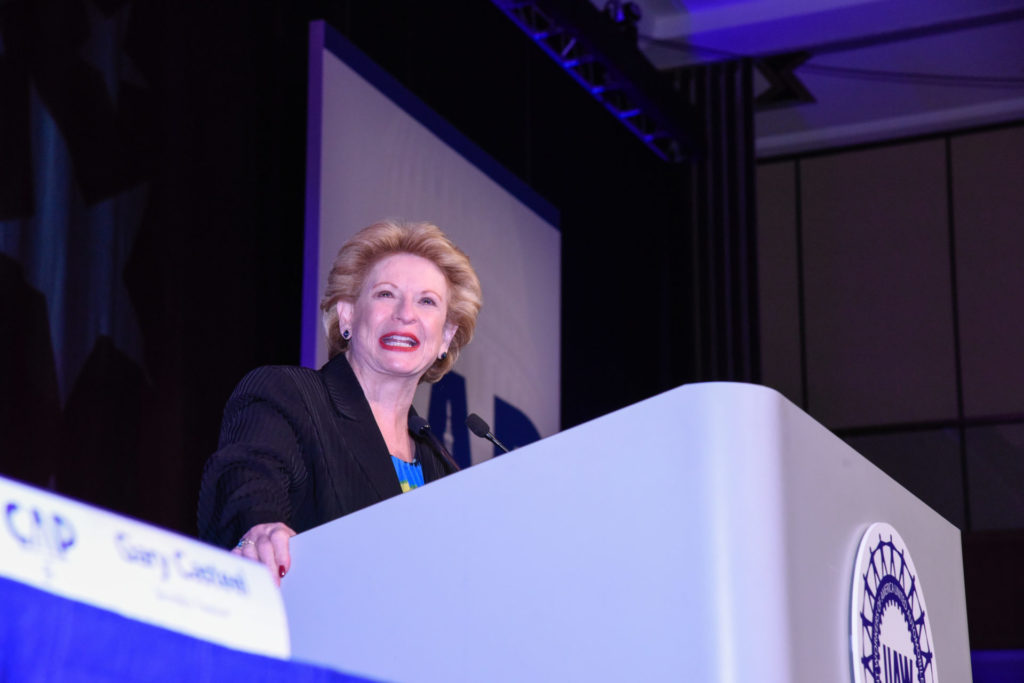 Republicans talk a good game. In fact, Sen. Debbie Stabenow said that she thought President Trump might have borrowed her speeches on the campaign trail in 2016 as he wooed workers who wanted something different out of Washington.

“You know what the problem is? You have to do more than talk or have symbols,” Stabenow told delegates at the 2018 UAW Community Action Program (CAP) Conference on Wednesday. “You have to act.”

For instance, she said, Trump promised that on Day 1 of his administration, he would address currency manipulation.

While he hasn’t acted to benefit workers, he has acted in his own business interests. The Chinese government has now registered 38 new trademarks related to Trump’s family business interests since he took office.

“This is wrong,” Stabenow stressed. “It’s not something any president should be doing ever – putting their own family interests ahead of the United States of America.”

Moreover, she added, he has put people in high-ranking government positions who are stacking the deck against workers. For example, Alex Azar, his choice to lead the Department of Health and Human Services, is the former president of Eli Lilly, a pharmaceutical giant that has fought against allowing the importation of lower-cost prescription drugs from Canada, claiming them to be unsafe. Azar supports continuing to allow insurance companies to negotiate drug prices with manufacturers rather than using the federal government’s purchasing power to lower prices.

“That’s what happening today. We have people overseeing departments who don’t have the American peoples’ interests at stake,” she said.

Stabenow also took aim at the recently passed tax reform bill, saying many corporations made a big deal out of giving workers a small bonus while generously rewarding their leadership and stockholders. For example, after the tax cut was passed, Hostess awarded its employees with $750 in cash, $500 in 401(k) contributions and a year’s supply of free Hostess products.

“Corporate investors get millions,” she said. “American workers get Twinkies.”