Secretary-Treasurer Ray Curry: By the Content of their Character 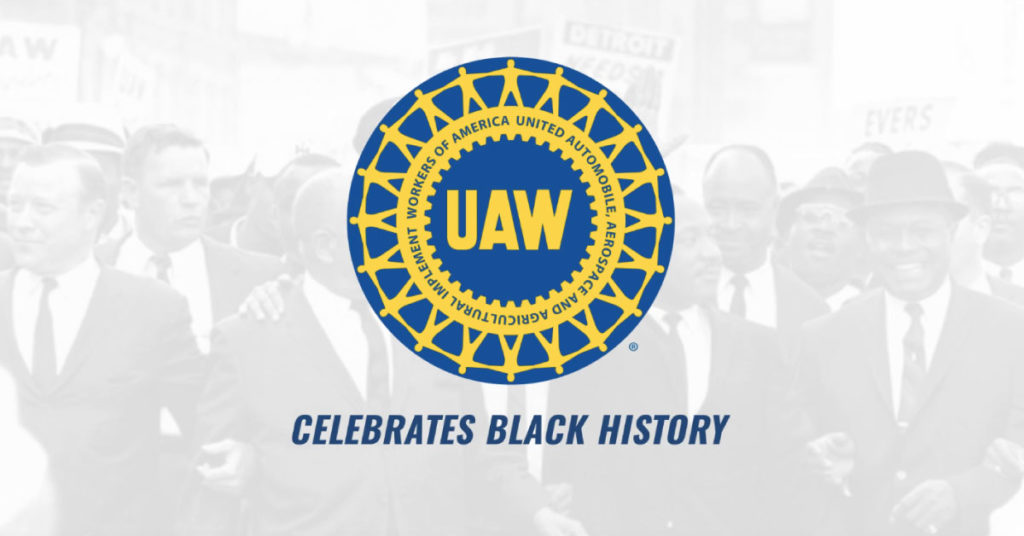 America’s Black History, which we celebrate this month, offers abundant examples across the centuries of how one person can make a difference, how one person can move an entire people forward. I am lucky enough to have witnessed the results of two such difference makers firsthand, both in my job and in my life. Two men who found each other in their individual fight for human rights, and in doing so, helped shape the future of our nation.

So, this February, I would like to pay tribute to that relationship, to two heavyweight champions who fought together for America’s soul, and who transcended their time and place in helping to define it forever: The Doctor Martin Luther King Jr. and Walter Reuther, President of the UAW.

A long time before these two extraordinary men teamed up, their spirits were entwined. Dr. King understood the voice that organized labor gave to workers just trying to better their lot. He once characterized it in a speech to an AFL-CIO crowd: “The labor movement was the principal force that transformed misery and despair into hope and progress. Out of its bold struggles, economic and social reform gave birth to unemployment insurance, old age pensions, government relief for the destitute, and above all, new wage levels that meant not mere survival but a tolerable life.”

For his part, Reuther confronted racism early on in the 1930s as a student at what is now Detroit’s Wayne State University. The incident involved a local hotel that was permitting white students to use its swimming pool but refused blacks.

When Reuther discovered this, he took on the injustice by organizing a protest that surrounded the block where the hotel was located with his fellow classmates. The action, typical of the times, resulted in all students being banned, black and white, but Reuther made a clear statement and went on to make a history of such battles.

In 1946, Reuther immediately took up social injustice upon becoming the UAW’s president by declaring that beyond the battle for worker rights it was “the union’s role to fight for the public at large.” Without waiting around for the country to get on board, Reuther took on the American Bowling League, which excluded black bowlers. In 1948, he began a bowling tournament in what is now UAW Region 1A in Michigan that allowed blacks and whites to bowl together. Today, that tournament still stands, and my brothers and sisters celebrate this rich tradition every year.

In 1949, just as the Civil Rights Movement was getting underway, he used his leverage to help bring about the first meeting in Washington, D.C., on civil rights legislation. Of his activism he once observed, “You can’t opt out of life, you have to make up your mind if you are willing to accept things the way they are.”

Both men knew what economic gain could bring. Early on, Dr. King took on anti-union politicians who he saw standing in the way of progress for America’s people of color: “In our glorious fight for civil rights, we must guard against being fooled by false slogans, such as ‘right to work.’ … Its purpose is to destroy labor unions and the freedom of collective bargaining by which unions have improved wages and working conditions of everyone. Wherever these laws have been passed, wages are lower, job opportunities are fewer and there are no civil rights.”

Reuther saw it the same way, conservative politicians ready to shut the door on equality and justice for all: “There is a direct link between ballot box and bread box,” he famously declared.

Both men knew the significance of fair housing. Walter Reuther started pushing for legislation, both lobbying for and devising fair housing programs, first in Detroit, and then nationally soon after the second World War. In the 1960s, he helped launch Operation Breakthrough, a U.S. Department of Housing and Urban Development program that used union-made manufactured housing to lessen the devastating impact the housing crisis was having on minority communities. The program helped create job opportunities in these locations, all the while encouraging racial and income integration in the larger community.

Doctor King, who knew all too well the misery that housing segregation caused for minorities, was himself a tireless warrior on this front. A 2018 article appearing in The Atlantic captures his fearlessness and tenacity for the cause:

“‘Kill him,’ a mob chanted as Dr. King marched across Marquette Park in the late summer of 1966. King had recently moved to Chicago, and on that August afternoon, he joined a Chicago Freedom Movement march to demand that realtors not discriminate against black residents seeking to live in white neighborhoods. A group of white counter-protesters grew violent and started hurling rocks, bottles, and bricks at the demonstrators, eventually striking Dr. King in the head. ‘I’ve been in many demonstrations all across the South, but I can say that I have never seen — even in Mississippi and Alabama — mobs as hostile and as hate-filled as I’ve seen here in Chicago,’ he said, shining light on a problem that white Northern liberals had ignored and let fester for far too long: de facto segregation.”

Resolve that will not break

Both men paid dearly in standing tall for all people: Reuther was confronted by Ford hired goons and beaten within an inch of his life while trying to organize workers. Would be assassins came to his door twice. Doctor King, who devoted his life to peaceful protest, was jailed repeatedly on just about every trumped-up charge imaginable. That rock thrown at him in Chicago knocked him off his feet. He stayed on the ground until he could shake off the cobwebs, get up again and keep right on marching.

None of this even slowed either man down for a moment in their fight for justice. Reuther marched with Dr. King in Selma, Montgomery, and Jackson. When King and 800 others were jailed in Birmingham, Alabama, Reuther turned to his fellow UAW members who raised $160,000 in bail money to get those arrested out of jail.

In the summer of 1963, Reuther teamed up with Dr. King in Detroit for The Walk to Freedom, the largest Civil Rights demonstration in U.S. history at that point, with an estimated 125,000 people attending. Led by Dr. King and President Reuther, the massive march down Woodward Avenue drew attention to matters close to the Equal Rights mission and to the UAW — racism, segregation, discrimination and inequality in hiring, wages, education and housing.

Reuther brought supporters and provided office space at Solidarity House for Dr. King to organize the event. It was at the UAW’s Solidarity House, in fact, that Dr. King composed the first version of his,” I Have a Dream” speech, which he gave with Reuther at his side at Detroit’s Cobo Hall following the march.

Two months later, the pair were together again, leading some 250,000 people, this time in front of the nation’s eyes, at the Lincoln Memorial in Washington, D.C. This seminal event, known as March on Washington for Jobs and Freedom, once again linked the two leaders and their causes.

It was here that Reverend King most fully articulated his “I Have a Dream” speech, in which he emphasized his faith that all men, someday, would be brothers. It was here too that Walter Reuther gave remarks from the podium. In his speech, Reuther urged that our nation must “… bridge the moral gap between American democracy’s noble promises and it’s ugly practices in the field of civil rights.” Following the event, President John F. Kennedy met with the two leaders to talk more on what could be done.

A spirit that will not be crushed

On the 25th anniversary of the UAW, King wrote a letter to Reuther, that included this passage:

“More than anyone else in America, you stand out as the shining symbol of democratic trade unionism. Through trials, efforts and your unswerving devotion to humanitarian causes, you have made life more meaningful for millions of working people. Through moments of difficulty and strong obstacles, you have stood firm for what you believe, knowing that in the long run ‘Truth crushed to earth will rise again.’ … One day all of America will be proud of your achievements and will record your work as one of the glowing epics of our heritage.”

Not long after writing that, the Dr. Martin Luther King Jr. was murdered for his life’s work of improving the lives of people oppressed for no more than the color of their skins. Fair Housing was passed in the wake of his assassination. Two years later, UAW President, Walter Reuther, was killed along with his wife, May, in a plane crash. His life’s work was to give voice to working people.

Today is a reminder of how hard these two friends fought and how very much they won for the generations that have come after them.

I think both brothers — brothers are what Dr. King envisioned we would all be to one another; and brother and sister are exactly what we as union members call each other. Dr. King would have been pleased to have heard that.

We continue their fight and will work in this 2020 election year as tirelessly as these two noble friends did throughout their lives to stand strong for justice.

Dr. Martin Luther King Jr. once stated, “The ultimate measure of a man is not where he stands in moments of comfort and convenience, but where he stands at times of challenge and controversy.

Truly this is a reminder of the relationship of two friends, two great leaders, and most importantly about the challenges that we still face each day.

Statement of UAW President Rory L. Gamble on the Election of President-Elect Joe Biden and the Need To Unify Behind a Strong Agenda for UAW Members