Rising to the Moment: Jill Biden and the UAW know Joe Biden will lead 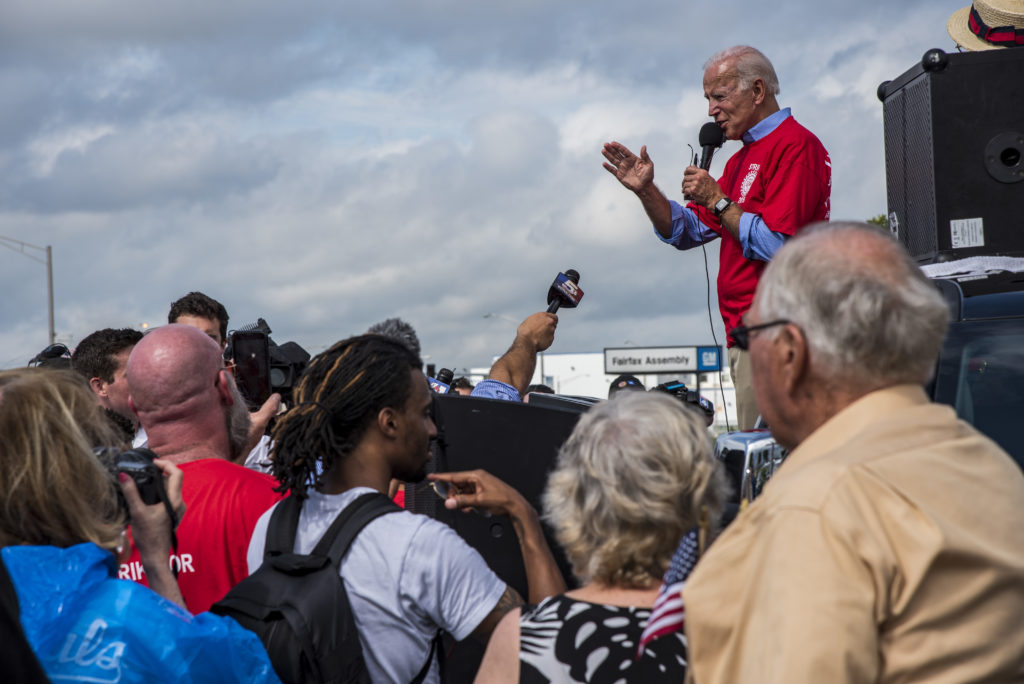 Leadership matters, especially when working families are struggling with the worst public health crisis in a century, which has spurred the worst economic crisis since the Great Depression.

For UAW members and their families, the 2020 election comes at a time of great uncertainty about the economy, retirement, health care and a way forward to guide the nation out of the COVID-19 pandemic.

During the virtual roll call, UAW Secretary-Treasurer Ray Curry was joined by U.S. Sen. Gary Peters, D-Michigan, on Belle Island in Detroit, to read the vote totals from Michigan’s presidential primary. They noted that Biden’s plan for the auto industry focuses on investments in new technology, increasing demand for American made and sourced clean vehicles, investing in U.S. auto manufacturing facilities and creating 1 million new jobs.

“Michigan autoworkers are the best in the world, and we would be nowhere without Joe Biden,” Peters said during the call.

Curry stressed, “Joe Biden believes in autoworkers. He’s got our back and we’ve got his.”

Former President Bill Clinton spoke about what the nation expects from the Oval Office: “At a time like this, the Oval Office should be a command center. Instead, it’s a storm center. There’s only chaos.”

Clinton illuminated the fact that the U.S. is the only industrialized country in the world to see its unemployment rate triple during the pandemic. “Joe helped bring us back from a recession before and he can do it again,” Clinton said.

Former President Jimmy Carter, now 95, said Biden “has the character, experience and decency to bring us together.”

Jill Biden spoke from a Delaware school where she once taught, and said her husband will “carry us forward in a time of need. The burdens we carry are heavy and we need someone with strong shoulders.”

Jill Biden compared the state of the nation today with her family after her husband lost his first wife and daughter in a car accident. Biden faced losses like many Americans are facing today.

Despite the division in the country, Jill Biden said the reaction to the pandemic from people of all walks of life shows that “the heart of this nation still beats with courage. That’s the America Joe is fighting for.”

“We haven’t given up,” she said. “We just need leadership worthy of our nation.”

In addition to Sanders nomination, Convention delegates also heard from former Secretary of State General Colin Powell, a veteran of the Reagan and Bush presidencies; and Cindy McCain, wife of the late 2008 GOP nominee for President, John McCain, who highlighted Biden’s lifelong friendship across party lines.

The night also featured a diverse group of 17 young leaders from all over the country, ranging from state representatives to mayors to a Navajo Nation president, to members of Congress — who gave an unconventional, joint keynote speech.

“Joe Biden is a man of courage,” said Stacey Abrams, who nearly won the governor’s seat in heavily Republican Georgia in 2018. “We are in this to win for America, so let’s get it done.”

The Gig Economy is Undercutting Workers