Rep. Norma J. Torres: Be a vehicle for democracy 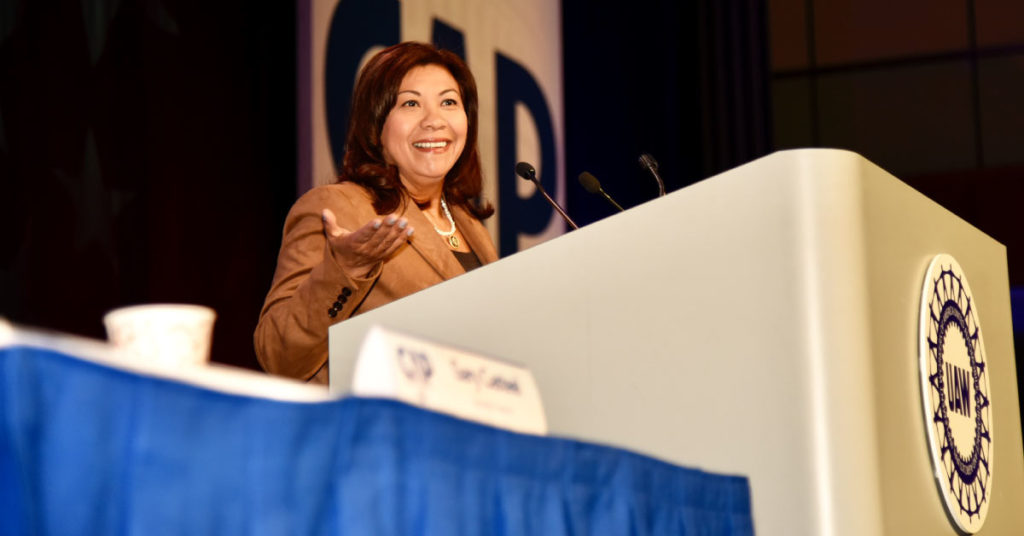 “Our democracy, the rule of law and institutions that we depend on are under attack. Your vigilance and passion are the most important tools we have to fight back — every single one of you here today,” said U.S. Congresswoman Norma J. Torres, who represents California’s 35th Congressional District, speaking before CAP Conference delegates Monday morning.

Torres spent 17 years working the 911 center for the Los Angeles Police Department, and as a volunteer shop steward, had a no-loss record representing her coworkers. As a state senator, she played a significant role in making the Affordable Care Act work for California’s workers and their families.

“Low wages and lack of unions, and the inability to collectively bargain has not only suppressed the voices of Mexican workers with NAFTA but has also hurt workers right here in the U.S. We owe it to our American workers to remedy the faults of the original NAFTA by holding our trade partners accountable for their labor practices and negotiate strong protections in any agreement.”

After Torres won election to Congress, she went on a listening tour with hundreds of California residents concerning the best way to create jobs. That effort resulted in two pieces of legislation: The Regional Infrastructure Accelerator Act and the JOBS Act.

“We have been called to duty. Every single person here is a vehicle for democracy … for sustaining everything that our veterans have fought for — here, at home and abroad. Let’s continue to fight for our American dream, our American democracy and our American workers.”

Statement on President Barack Obama’s State of the Union Address

STATEMENT ON RELEASE OF YANG KYEUNG-SOO, PRESIDENT OF THE KOREAN CONFEDERATION OF TRADE UNIONS