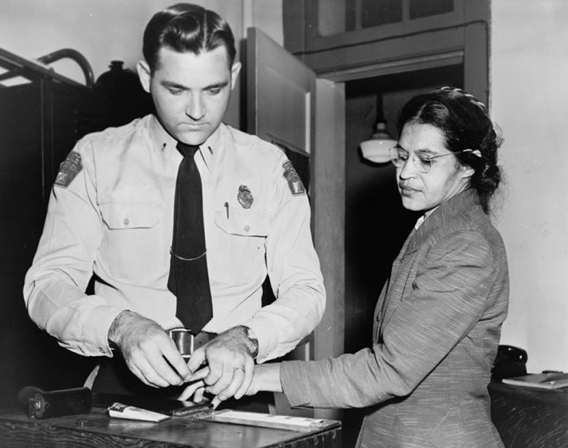 Today is an important date in civil rights history. Eighty-nine African-Americans, including Martin Luther King, Jr. and Rosa Parks, voluntarily turned themselves in to authorities in Montgomery, Alabama, on Feb. 22, 1956, after being indicted under a 1921 law “prohibiting conspiracies that interfered with lawful business.”

The statute, designed to break trade union action, outlawed boycotts against businesses without “just cause.”  UAW President Walter Reuther was an avid supporter of civil rights at a time when people didn’t always speak out in support.  Reuther was later a friend of Martin Luther King, Jr. and the UAW supported the movement in many ways, including paying bail and court costs for those arrested for the cause.

Authorities charged Martin Luther King, Jr. with organizing the black community to boycott the buses in Montgomery, which was already in its third month.

The boycott was needed because the town’s segregation laws allowed separate areas on buses for black and white passengers and required black passengers to give up their seats for whites if seats were needed.

In addition, the segregation line within the bus would change intermittently so that if more white passengers boarded, the bus driver would move the signs. Black passengers sitting inside of this new boundary would have to move again.

Black passengers were often not permitted to offend and pass by the white section of the bus, which required them to pay their fare for the ride in the front door by the bus driver, but then leave the bus and re-enter in the black section in the back of the bus. Sometimes, though, bus drivers would take their money and drive away before they had a chance to re-board the bus through the back doors.

Black leaders in the South knew a call to action needed to take place, so they asked Montgomery chapter of the NAACP secretary Rosa Parks to help start the action. Although other women before her refused to give up their seats on buses, Parks was ultimately chosen to lead this crusade. On December 1, she paid her fare and sat down in the black section of the bus just behind the white section. As the bus made its way through its usual stops, it began filling up, and when it was time for more white passengers to board, the bus driver moved the “colored” section sign from in front of Parks to behind her. But she only moved one seat over toward the window and not to a seat in the black section. Police were called and she was arrested.

Later, she said, “As I was being arrested … it was the very last time that I would ever ride in humiliation of this kind…”

On Dec. 4, 1955, plans for the boycott circulated within the black community through churches in the area and on the front page of a black newspaper. The next day, Rosa Parks was tried on charges of disorderly conduct and violation of a local ordinance. Her trial would last only 30 minutes and, after being found guilty, she was fined $10 plus $4 in court costs.

Later that day, 35,000 leaflets were send out urging everybody in the black community to stay off the buses until segregation was eliminated on the buses. Since 75 percent of the city’s bus passengers were African-Americans, the boycott would definitely make an impression on the buses and in the city.

For the next few months, Martin Luther King, Jr. helped the community stay mobilized and motivated as the black community began walking, carpooling, hitchhiking, riding horses, and riding bikes regardless of weather conditions. The movement also bought station wagons and used many volunteer vehicles and drivers to transport the boycotters.

This second arrest of Rosa Parks is significant to our memories of the civil rights movement because most Americans have attributed these arrest photos to her first arrest on Dec. 1, 1955, for civil disobedience for refusing to move her seat on the bus. These photos, however, were taken after turning herself in for conspiracy charges based on her participation in the Montgomery Bus Boycott.

After 381 days of sacrifice, collaboration and determination, the Montgomery Bus Boycott ended successfully after Alabama bus companies were forced to recognize a U.S. Supreme Court ruling that segregation on public transport was illegal.