Remarks of Region 2B Director Ken Lortz from Honeywell Rally 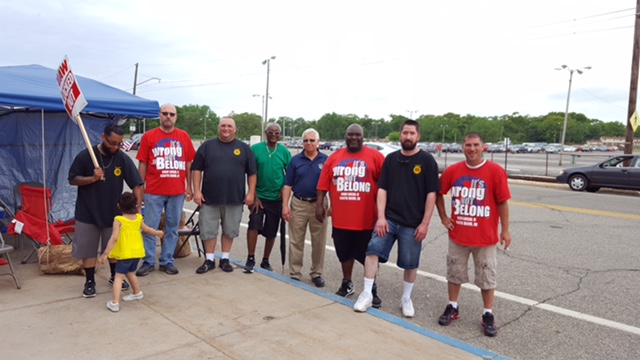 The following are remarks given by Region 2B Director Ken Lortz at a rally for locked out Honeywell workers and members of UAW Local 9:

For anyone who wants to see what Solidarity looks like, they need look no further than South Bend, Indiana.

This week, the International President of the UAW, Dennis Williams and key members of his Staff were here, on this picket line.

UAW Locals and Members all across our Region stand with Local 9 and have pledged financial support.

And, I am proud to say the resolve ofLocal 9 members to stand firm until a fair and just Agreement is reached has never been more clear.

This is what Solidarity looks like and it is time Honeywell does the right thing, ends this lock-out, and bargains in good faith.

From the start, our preference has, and continues to be, that we continue to manufacture the high level of quality and delivery performance our customers expect and to protect the reputation we have built while the bargaining process works.

It is unfortunate that Honeywell has jeopardized our ability to protect our reputation of quality and delivery, by locking us out of the plant and replacing us with less experienced, out of state scab workers.

One should also question Honeywell’s loyalty to their customers.  They have decided to use scab labor to manufacture brakes and wheels for aircraft used in commercial and military applications.

I believe these customers, the public, tax-payers, and our military deserve better.

While CEO  David Côte  was paid $25 million in 2015, and Honeywell reported record profits, they are still demanding severe cuts in worker rights and benefits.

Incredibly, Honeywell thinks collective bargaining means, retaining for itself the unilateral right to modify and even terminate our health care benefits during the life of the Agreement.

That is not the kind of collective bargaining our members deserve.

I’m pleased some progress was made at the bargaining table this week.  However, much more progress is needed to reach a fair Agreement.

It appears Honeywell no longer respects their most valuable assets, their workers and their customers.

Stand firm my Sisters and Brothers,  Justice will prevail.

The day we stop fighting, justice will be lost.