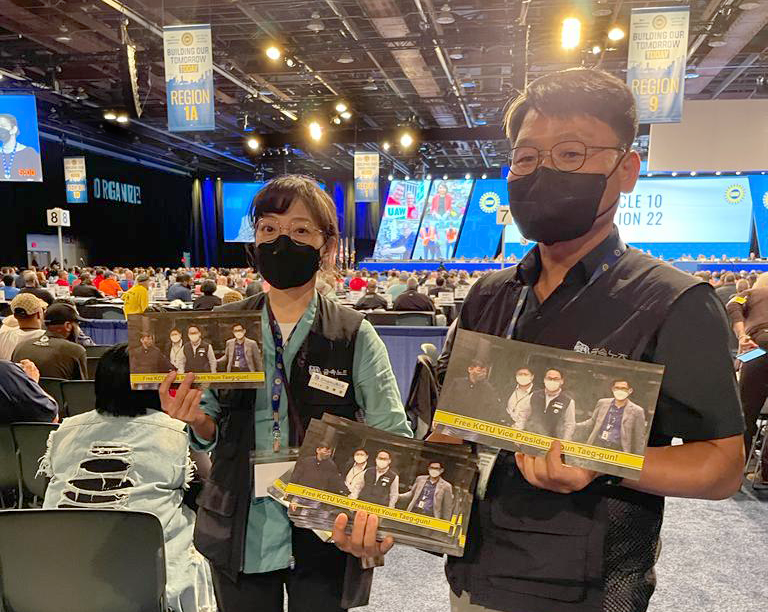 Delegates to the UAW’s 38th Constitutional Convention sent messages of solidarity on postcards addressed to the prison in Seoul where Youn was being held. Members of the Korean Metal Workers’ Union who attended the UAW Convention as international guests brought the postcards back with them to South Korea upon their return home.

The UAW celebrates the release of Youn Taeg-gun, First Vice-President of South Korea’s largest trade union confederation, the Korean Confederation of Trade Unions (KCTU). On August 5, 2022, the Seoul Central Municipal Court ruled that there was no legal justification to continue to hold Brother Youn. He was released after 94 days in detention just over a week after UAW Convention delegates signed and sent hundreds of postcards expressing solidarity and demanding his release.

Prior to the Convention, the UAW fought hard for Youn’s release. UAW actions included a strong condemnation of the arrest communicated by President Curry directly to the South Korean President and a protest and senior-level meeting at the Embassy in Washington DC. The UAW also raised the issue with the White House, Department of State, Department of Labor and the Office of the US Trade Representative.

Youn was arrested for organizing a general strike, an internationally recognized worker right.

The UAW recognizes that, in releasing Brother Youn, the government of South Korea has taken an important step toward meeting its obligations to respect freedom of association and assembly.  However, we have deep concerns that the South Korean government continues to harass trade unionists for exercising basic labor rights.

Many other trade unionists have been called in for questioning or threatened with financially devastating lawsuits. The UAW calls on the South Korean Government immediately to end harassment and intimidation of trade unionists, to respect freedom of association and assembly, and to amend its laws so that they can no longer be used against trade unionists who are exercising their legitimate rights. This is unacceptable behavior for a country that calls itself a democracy, has a bilateral trade agreement with the United States and is our 6th largest trading partner.