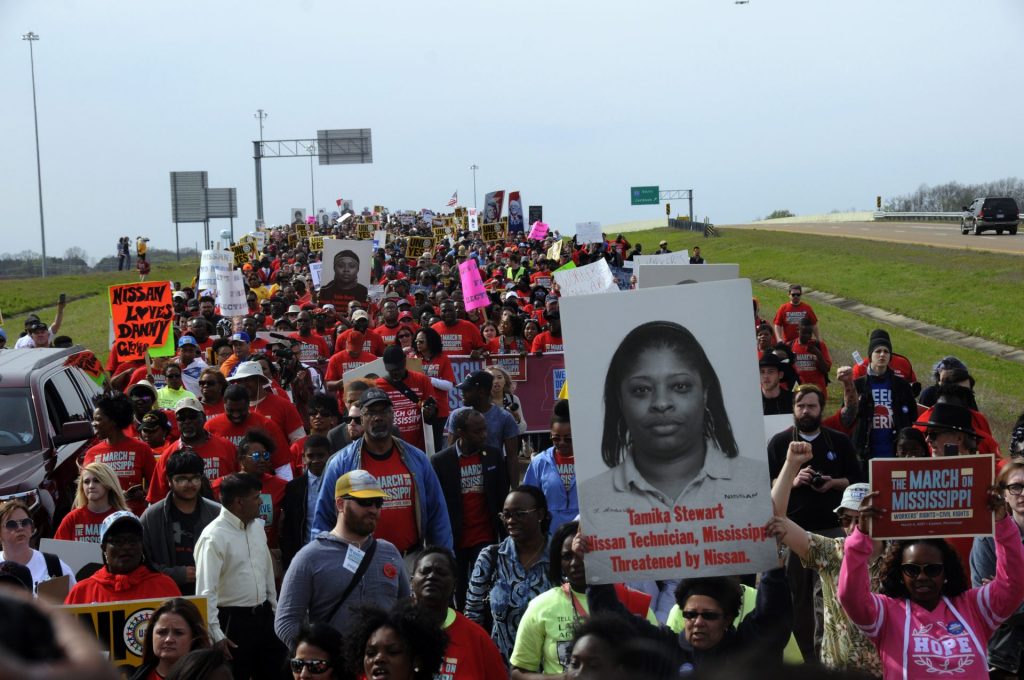 CANTON, Miss. — The National Labor Relations Board (NLRB) has issued a new complaint alleging unfair labor practices against Nissan in advance of this week’s representation election for blue-collar employees at the company’s Canton plant.

The new NLRB complaint comes on the heels of intensifying unfair labor practices by Nissan leading up to this week’s vote for a union at the company’s Canton plant — one of only three Nissan facilities in the world, including two in Tennessee, where workers are not represented by a union. UAW attorneys are preparing new unfair labor practice charges based on the company’s latest actions.

“Everyone hoped Nissan would live up to its commitments over the years and allow Canton workers the right to cast a ballot free from company coercion and interference,” said Gary Casteel, secretary-treasurer of the UAW and director of the international union’s transnational department. “But after seeing threats and intimidation escalate this month, it’s now clear that Nissan has no intention of letting employees vote in a free and fair election.”

Casteel added: “Nissan is running one of the nastiest anti-union campaigns in the modern history of the American labor movement. The company’s investors as well as socially conscious policymakers in the U.S. and around the world need to understand what’s happening in Mississippi and join local civil-rights leaders in calling for a halt to Nissan’s illegal and unethical behavior.”

Nissan employees, with legal and technical assistance from the UAW, on July 11 announced the filing of an election petition with the NLRB. The company and the UAW quickly agreed to a two-day election on August 3 and 4. Then, almost immediately, Nissan managers and supervisors stepped up threats and intimidation inside the plant.

From mid- to late-July, Nissan supervisors have pressured their employees in group and one-on-one meetings with threatening anti-union messages. The company has repeatedly broadcast anti-union videos telling workers that it was not “in their best interest” to unionize.  This theme is a continuation of Nissan’s plant closing and loss of jobs threats that have been made over the last several years, but which have now been intensified because the threats are being delivered directly by Nissan’s top plant management.  These threats are unfair labor practices, just as the threats previously documented by the UAW and alleged by the NLRB in complaints that the Labor Board has issues against the Nissan over the past several years.  And now, on the eve of the election, Nissan has launched a sizable anti-union cable-television buy in the central Mississippi media market.

Nissan has also prevented a fair campaign by denying Canton workers equal access to arguments in favor of a union.  Since the election petition, Nissan has used each day to deliver its threatening anti-union messages in repeated, mandatory meetings with workers, all in order to pressure them to follow Nissan’s instructions to “VOTE NO.”  Pro-union workers are denied equal time in such meetings to express their views in favor of a union.  Moreover, Nissan repeatedly broadcasts its “VOTE NO” message over its in-plant communication televisions, while denying equal time (or even any time) for worker broadcasts expressing the opposite view.  “There is no atmosphere of free choice in the Canton plant, just fear, which is what Nissan intends,” says Nissan Technician Washad Catchings. These are the tactics of a bully intent on denying a fair election.  They deny the heritage of the fight for the freedom to vote that is the hallmark of the honorable citizens of Mississippi.

Nissan has a history of unfair labor practice conduct in Mississippi. Beginning in November 2015 and as recently as May 2017, the NLRB has issued a series of amended complaints against Nissan and the company’s temp-worker agency Kelly Services alleging that they are “interfering with, restraining and coercing employees in the exercise of their rights.” Currently, the complaints are awaiting trial by an administrative law judge. No date has been set.

In addition to the NLRB’s actions, the U.S. Occupational Safety and Health Administration issued multiple citations against Nissan for violations of federal safety and health laws in Canton. The most recent citations, issued in February 2017, found the company “did not furnish employment and a place of employment which was free from recognized hazards that were causing or likely to cause death or serious physical harm to employees.”

Looking ahead: The UAW and the Mississippi Alliance for Fairness at Nissan (MAFFAN) — a coalition of faith and community leaders — are calling on Nissan to immediately stand down from threats and intimidation and abide by the commitment that Carlos Ghosn, chairman and CEO of the Renault-Nissan Alliance, made to the French government. With an approximately 20 percent stake in Renault, the French government is the largest shareholder in Renault, which in turn is the largest shareholder in Nissan.

In a February 2016 hearing before the French National Assembly, Ghosn denied allegations that Nissan opposes employee representation in Mississippi and assured lawmakers that the company “has no tradition of not cooperating with unions.”

“Clearly, Nissan says one thing to socially responsible investors like the French government and then does something totally different here on the ground in Mississippi,” said MAFFAN Chair Dr. Isiac Jackson. “We must keep up the pressure until the company fulfills its obligations under federal law and respects the civil rights of a predominantly African-American workforce.”