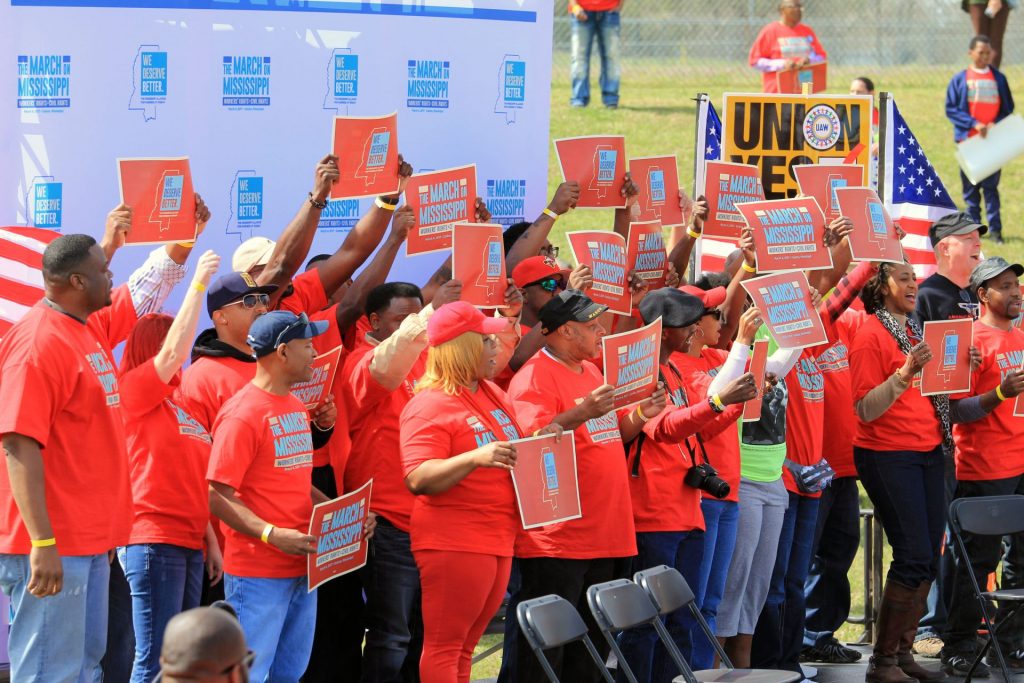 UAW Calls on Company to Cease Threats, Intimidation of Workers

(Pictured: employees at Nissan’s Canton plant participate in the March on Mississippi earlier this year)

CANTON, Miss. — Acting on behalf of Nissan employees, the UAW today reached an agreement with Nissan to hold a two-day union representation election, supervised by the National Labor Relations Board (NLRB), on Thursday, Aug. 3, and Friday, Aug. 4, in Canton, Miss.

In an election petition filed with the NLRB, Nissan employees originally sought to schedule the election earlier that same week but instead agreed to the Aug. 3-4 dates offered by the company.

In announcing the election dates, the UAW criticized Nissan for stepping up efforts to intimidate employees following the July 11 announcement that an election petition had been filed. In the days following the petition, Nissan employees have reported widespread pressure by company supervisors in one-on-one meetings and in videos broadcast inside the Canton plant.

Because of Nissan’s actions, which are inconsistent with the company’s stated principles of neutrality, the UAW said it will prepare a new round of unfair labor practice charges to submit to the NLRB.

Nissan’s treatment of workers in Mississippi is contrary to statements made last year by Carlos Ghosn, chairman and CEO of the Renault-Nissan Alliance. In a February 2016 hearing before the French National Assembly, Ghosn denied allegations that Nissan opposes employee representation in Mississippi, claiming the company “has no tradition of not cooperating with unions.”

Gary Casteel, secretary-treasurer of the UAW and director of the International Union’s transnational department, noted the disconnect between Ghosn’s political statements and Nissan’s actual behavior in Canton.

“Over the past six days, Nissan has made it abundantly clear that it does not respect its Mississippi employees’ rights to vote in a free and fair election,” Casteel said. “In fact, the company is running one of the most aggressive anti-worker campaigns that we’ve seen in modern U.S. history.”

Casteel added: “We call on Nissan to immediately respond to demands by civil-rights leaders in Mississippi to meet with employee representatives in order to discuss conditions for achieving neutrality and ensuring that Nissan employees in Canton can vote on a local union in a free and fair election.”

The Mississippi Alliance for Fairness at Nissan (MAFFAN) — a coalition of civil-rights leaders, ministers and worker advocates — has blasted Nissan for violating workers’ rights following the company’s skirmishing with federal authorities.

Between November 2015 and May 2017, the NLRB issued a series of complaints against Nissan and the company’s temp-worker agency Kelly Services for violating workers’ rights by “interfering with, restraining and coercing em­ployees in the exercise of their rights.” The NLRB alleged that Nissan unlawfully threatened to close the Canton plant if workers unionized and also threatened employees with termination.

In addition to the NLRB’s complaint, the U.S. Occupational Safety and Health Administration (OSHA) has issued multiple citations against Nissan for violations of federal safety and health laws in Canton. The most recent citations, in February 2017, found the company “did not furnish employment and a place of employment which was free from recognized hazards that were causing or likely to cause death or serious physical harm to employees.”

1,500 Researchers at University of Washington File to Form a Union