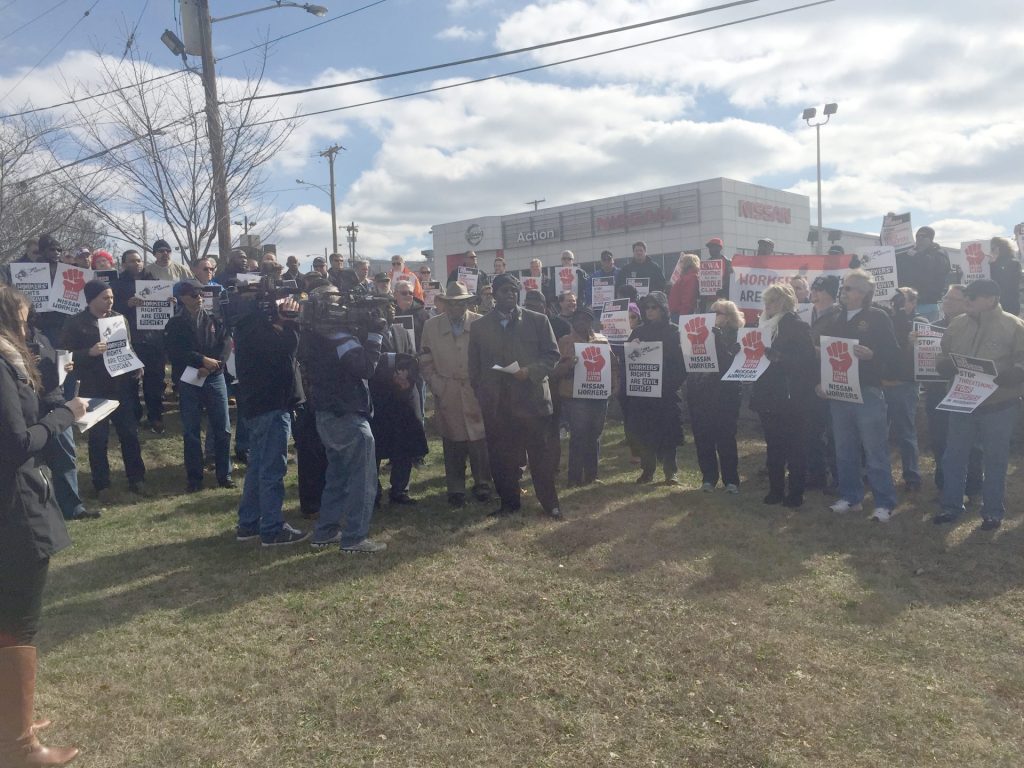 “We are proud to stand with our friends in Mississippi to call attention to civil rights abuses at Nissan’s assembly plants,” said the Rev. Ed Thompson, chair of Nashville Organized for Action and Hope (NOAH), a coalition of faith leaders, community organizations and labor unions. “We believe workers’ rights are civil rights. We’re asking Nissan to do better by its hard-working employees, and we’re asking Nissan’s dealers and customers to join us in this cause.”

The North American headquarters of Nissan is located in Franklin, Tenn. – 14 miles south of Nashville’s Action Nissan dealership. In addition to Nashville, peaceful protests this week are scheduled at Nissan dealerships in Atlanta, Birmingham, Ala., Charlotte, N.C., Greensboro, N.C., New Orleans and Raleigh, N.C. Most Nissan vehicles on the road in these cities were assembled at the carmaker’s plants in Canton, or Smyrna, Tenn., which faces similar workers’ rights problems.

Participating in this week’s protests: The Mississippi Alliance for Fairness at Nissan (MAFFAN), a coalition of civil rights leaders, ministers and worker advocates. In each city across the region, local delegations are hand-delivering letters on behalf of MAFFAN to Nissan dealers detailing the mistreatment of workers in Canton and calling for an end to the company’s anti-union position.

Nissan began operating in Canton in 2003 amid high hopes for Magnolia State workers. But despite expectations that the plant would “bring quality jobs to our community for years to come, over time Nissan has decided to take a different path,” wrote Dr. Isiac Jackson, chairman of MAFFAN, in the letters delivered to Nissan dealers. “Today, the company exploits its predominantly African American workforce in a variety of ways.”

Among examples, Jackson pointed to punishing production quotas in the Canton plant as well as a lack of adequate safety equipment. The company has relied heavily on temporary employment agencies for hiring, paying lower wages to temporary employees for the same work as permanent workers. Nissan management has run a campaign of coercion and intimidation to keep workers from speaking about a union. Of the roughly 5,000 workers at Nissan’s Canton plant, an estimated 80 percent are African American.

Problems at Nissan’s Canton plant have been intensifying. In late 2015, the National Labor Relations Board charged Nissan and a temporary worker agency with violating workers’ rights in Mississippi. Last year, the Occupational Safety and Health Administration cited repeated hazards at the Canton plant.

“People get hurt too often at Nissan and these injuries can rob us of our ability to provide for our families,” said Ernest Whitfield, a 13-year employee in Canton plant who visited the Action Nissan dealership protest in Nashville. “We’re forced to decide if we should work with an injury, or report it and potentially lose our jobs. It strips away your dignity to feel like the company values production numbers more than the safety of the people who make it successful.”

Nissan’s Canton plant, like the company’s Smyrna facility, does not have an employee union. Protestors want Nissan to stop conducting anti-union activities at both locations, and allow free and fair elections among employees who want union representation.

“Nissan spends hundreds of millions of dollars a year marketing itself as a socially responsible carmaker,” said Vonda McDaniel, president of the Central Labor Council of Nashville and Middle Tennessee. “But the reality is, Nissan is turning a blind eye toward workers’ rights and safety problems at its assembly plants. It’s time for Nissan dealers and customers to recognize that what they’re selling and buying just doesn’t fit the image of what Nissan claims it’s producing.”