“There’s a pension in your future, Bugas,” said the picket sign of one old worker who marched in support of the UAW drive for pensions for workers in 1949. 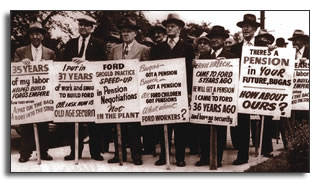 “How about ours?” Bugas referred to John Bugas, Ford Motor Company’s chief negotiator, who like other Ford executives, had their retirement security nailed down. But for the $3,000-a year auto worker, life was different.

They worked until they dropped from exhaustion, and the lines had aged workers with gnarled hands and weathered faces who couldn’t afford to retire.

Social Security, which had begun to pay out benefits in 1941, had been stuck at a low level for 12 years. The UAW set out to change these conditions the double standard that characterized American industry. And we got some needed help. 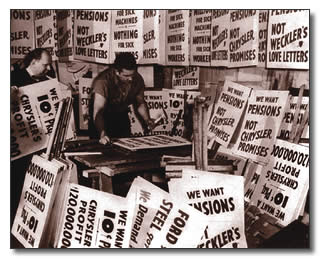 Under President Harry Truman, The National Labor Relations Board ruled in March, 1949 that companies must bargain with their unions on pensions.

That ruling opened the door.

Walter Reuther, the visionary president of the UAW, called for pro-pension rallies around the country to mobilize popular support.

“Too old to work and too young to die,” became the slogan of autoworkers.

“We won’t sign a contract at Ford in ’49 that does not include a pension plan,” Reuther told 5,000 Ford workers at Cass Technical High School in Detroit.

When Reuther called for a strike vote, Ford workers authorized it by a huge majority.

Finally, the break-through came in September 1949 when the UAW won a $100-a-month pension (including Social Security benefits which averaged $32.50 a month) at age 65 with 30 years of service.

It was far better than any worker had expected the UAW to win.

Congress also got the message. Within 24 hours of Ford signing the contract, the U.S. House of Representatives raised Social Security benefits for all Americans.

That was no coincidence. 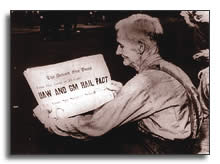 With a pro-pension fervor sweeping the country, business lobbyists saw a Social Security increase as a way to save their employers money.

The UAW established important principles with the Ford pension:

These basic rules have remained intact because they have been proven sound for more than 40 years.

Then the UAW sought to expand pensions to other employers. 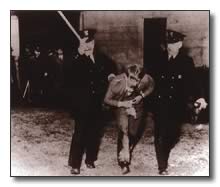 Chrysler readily agreed to the $100 benefit won at Ford. But they didn’t want to agree to fund the benefits.

UAW workers at Chrysler walked the picket line for 104 days in the bitter cold winter of 1950 to convince the company to agree to a funded plan.

In those days, the UAW didn’t have a strike fund so the Chrysler workers relied on meager help from a special assessment.

Another important step was taken in negotiations with General Motors.

The UAW proposed, and the corporation agreed, to break the link with Social Security and instead base the workers’ pension on the length of service with the corporation.

The agreement provided GM workers $1.50 a month in benefits for every year of service up to 30 years. With $45 added to the new Social Security benefit of $72, the GM retiree with 30 years of service, would get more than $117 a month.

The UAW’s newspaper in the early 1950s told the stories of workers who were able to retire: a 72-year old worker at the Nash paint shop in Kenosha, Wisconsin, and a 78-year old grandmother at a small shop in Detroit.

And in subsequent negotiations, the UAW improved our pensions, adding medical care for retirees, the right to take pensions before age 65 and many other features.

The UAW has done well for its older and retired workers. Here’s what has happened to the benefits of the average member.

From the beginning in the 1950s, of the $100 pension benefit – which included Social Security – the union’s negotiators have steadily increased pensions.

UAW members with pensions are fortunate indeed. Not all UAW retirees receive pensions and only 45 percent of American retirees have any pension at all.

UAW pensions in the auto industry rank in the top 10 percent of private pensions.

A large proportion of the UAW auto industry workforce is eligible to retire in the next few years. Nearly half of the UAW members at the Big Three and Delphi will have the necessary combination of age and years of service to retire within the next five years. Currently, GM has about 2 retirees per active worker compared to the one to one ratio of active workers to retirees at Ford and DaimlerChrysler.

We have come a long way since 1951, but the cost of retiree pensions and benefits or “legacy costs” has caused companies and the government to try to pass more of these costs onto retirees. A study released by the Kaiser Foundation and Hewitt Associates reported that premiums for retirees who get health care benefits from their former employers jumped an average of 25 percent in 2004.

According to a study conducted by Hewitt Associates and the Kaiser Foundation, only 14 years ago, 80 percent of employers with 1,000 or more workers offered health care coverage to retirees. By 2003, the number is down to only 57 percent. For employers with 200 or fewer employees, just 38 percent provide retiree health insurance.

The UAW is continuing to fight to maintain and enact legislation to protect retirees and the lifestyle to which they are entitled. This is why it is so critical for retirees to become involved and support their union and the active membership in their struggles to retain pension plans, social security, health care and organizing.

“The essence of trade unionism is social uplift. The labor movement has been the haven for the dispossessed, the despised, the neglected, the downtrodden, the poor.” (quote from A. Phillip Randolph)

The UAW, with the help of its members and retirees have come a long way, but we still have a hard fight ahead of us.