Ask any gathering of union activists and leaders about union meeting attendance and almost all will say the same thing: rank and file members don’t attend union meetings in the numbers that they should. This matters because the union meeting is the heart of where members debate the issues facing their membership and where they vote on matters like union expenditures.

Like a lot things, turning this trend around will take work and consistency. Here are some tips from locals that have had success in rebuilding their union meetings.

TIP 1: Spread the word! Notice of union meetings is not only a requirement per many local union bylaws (and the UAW Constitution requires specific notice for certain union meetings), but it is the best way to drum up interest in the meeting. Notice on the bulletin board, a posting in the local union newspaper or newsletter, a message on the website or social media. Text, email or even postcards: telling members about dates, times and locations of meetings is critical. Adding additional information such as important discussions can also raise interest. Graphics or notices with visual interest will capture attention. 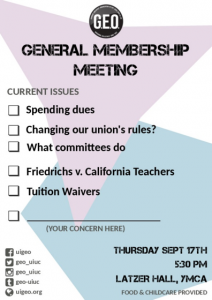 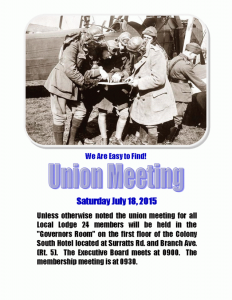 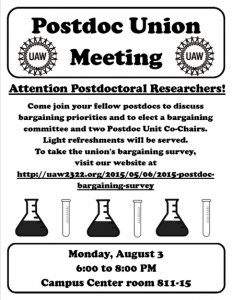 TIP 2: How we talk about the union meeting matters. Think about this example: your union meeting is coming up Saturday. You let everyone in your department know, you even print a flyer. Come Saturday, no one new shows up. When you get to work Monday, a co-worker asks you, “what happened at the union meeting?” and you answer (without missing a beat): “if it’s that important to you, you would have been there.”

Everyone recognizes this scenario and we all understand the source of the frustration. But it is fairly likely that the co-worker in this example is not going to attend a future meeting. Reacting out of frustration only pushes people away. Another way to look at this exchange is that a co-worker was interested in the meeting. That’s an opening in a conversation to say, “The meeting was great! We talked about a lot of things including the new quotas in some of the departments. We need more ideas from people, though, you should come to the next meeting and share yours.”

TIP 3: The best reason to attend a meeting is if members see that they are a part of something they are interested in. How many of us know what’s good for us, but don’t do it anyway? Make connections between the issues discussed at the meeting and something your co-worker cares about.

TIP 4: Walk the walk. If union leaders (both elected and appointed) don’t make it a priority to attend their union meetings, then we can hardly get mad when no one else shows up. 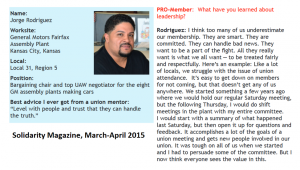 This page brought to you by PRO-Member