Workers from throughout Michigan gathered under a clear sky and blistering heat for Detroit’s Labor Day March in a display of solidarity that showed the power of unions to ensure fair treatment for workers.

Workers, allies and pro-worker candidates joined the march to stand up for working families. At a gathering at Solidarity House in Detroit afterward, speakers looked ahead to what’s at stake in the midterm elections in November.

Michigan Democratic Senate candidate Debbie Stabenow said enough is enough from anti-worker politicians in Washington. “I’ve had enough of this assault on working men and women. We need to turn things around in Lansing and Washington,” said Stabenow. “When I see the Democratic ticket in the November midterm elections I see fighters.” State House Democratic Leader Sam Singh said the state legislature could swing Democratic if enough voters show up Nov. 6. “The only way to change what’s happening to workers is with a state house in Democratic control. We only need to win nine more seats to make that happen,” he said.

Congresswoman Debbie Dingell told the crowd anyone who didn’t think their vote mattered in 2016 needs to rethink that in November. “Tell them to look in the mirror and take responsibility for what’s happening now in this country,” she said. Attorney General candidate Dana Nessel said it’s all about who voters select. “For the last 16 years we’ve had a Republican attorney general. We need one who is unapologetically pro-labor and pro-union. That’s me!,” Nessel told workers.

Other speakers included Supreme Court candidates Megan Cavanagh and Sam Bagenstos, congressional candidate Andy Levin, and Kelly Tebay, vying for a seat on the Michigan State Board of Trustees.

Here are some highlights from the day: 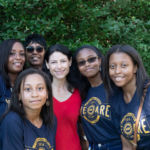 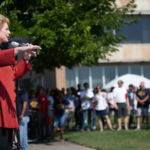 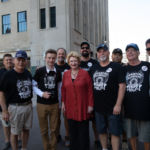 Unions and the Fight for Civil Rights