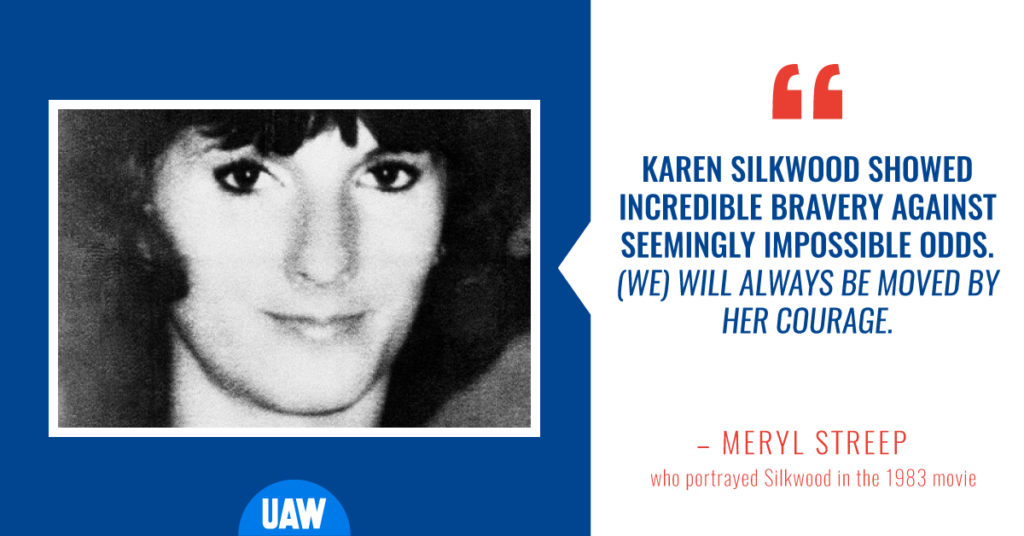 On Nov. 13, 1974, one of the most famous whistleblowers of all time was killed in what is now believed a company-supported murder when she died in a car accident after exposing wrongdoing at a plutonium plant where she worked.

28-year old Karen Silkwood was a Kerr-McGee plutonium plant technician in Oklahoma City and a member of her union’s health and safety committee (Oil, Chemical and Atomic Workers Union, OCAW). Two months before her death, she went to the federal Atomic Energy Commission (AEC) to report dangerous levels of radioactivity at the plant when monitors showed she had radiation contamination.

After testifying before the AEC, Silkwood was working November 5, polishing plutonium pellets for nuclear power plant fuel rods when a radiation detector went off. It indicated her right was arm was covered in plutonium and that it had come from the inside of her work gloves, or from her arm and hand, and not from plutonium exposure. Doctors performed further tests and the results showed high levels of radioactive contamination in her body and the apartment she shared with a co-worker, but it was inconclusive how the radioactivity got in her body at such high levels.

On the night of her death, she was driving to meet with a union representative and a New York Times reporter when she hit a concrete culvert. She had with her paperwork showing the company’s safety negligence, paperwork that was missing from the car after the accident. There was no explanation for the crash and she was dead almost instantly. Investigators found she had taken a large dose of Quaaludes before driving. But they also found skid marks and an unexplained dent in her rear bumper, strongly suggesting she was driven off the road by another driver. After she was killed an autopsy showed she had mysteriously ingested plutonium.

Karen Silkwood’s father would later win a $1.3 million lawsuit against Kerr-McGee. The company would close five years later and an award-winning movie about Karen Silkwood’s battle with Kerr-McGee and subsequent murder would be made in 1983 starring Meryl Streep and Cher.

UAW International Executive Board Statement Regarding the Flint Water Crisis